Tax the rich and better target the multinationals: The IMF has set off shockwaves in Washington this week by suggesting countries fight budget deficits by raising taxes, reports AFP.

Tucked inside a report on public debt, the new tack was mostly eclipsed by worries about the US budget crisis, but did not escape the notice of experts and nongovernmental organizations (NGOs).

“We had to read it twice to be sure we had really understood it,” said Nicolas Mombrial, the head of Oxfam in Washington. “It’s rare that IMF proposals are so surprising.”

Guardian of financial orthodoxy, the International Monetary Fund, which is holding its annual meetings with the World Bank this week in the US capital, typically calls for nations in difficulty to slash public spending to reduce their deficits.

But in its Fiscal Monitor report, subtitled “Taxing Times”, the Fund advanced the idea of taxing the highest-income people and their assets to reinforce the legitimacy of spending cuts and fight against growing income inequalities.

“Scope seems to exist in many advanced economies to raise more revenue from the top of the income distribution,” the IMF wrote, noting “steep cuts” in top rates since the early 1980s.

According to IMF estimates, taxing the rich even at the same rates during the 1980s would reap fiscal revenues equal to 0.25 percent of economic output in the developed countries.

“The gain could in some cases, such as that of the United States, be more significant,” around 1.5 percent of gross domestic product, said the IMF report, which also singled out deficient taxation of multinational companies.

In the US alone, legal loopholes deprive the Treasury of roughly $60 billion in receipts, the global lender said.

The 188-nation IMF said that it did not want to enter into a debate on whether the rich should pay more taxes.

But, it said: “The chance to review international tax architecture seems to come about once a century; the fundamental issues should not be ducked.”

“It’s clearly something finance ministers are interested in, it’s something that is necessary for the right balance of public finances,” said Lagarde, a former French finance minister, in a panel discussion Wednesday.

“There are lot of wasted opportunities,” she added.

After the French Socialist government’s proposal of a 75 percent tax on the wealthy was overturned by the country’s highest court last year, France’s finance minister cautiously welcomed the Fund’s new direction.

“If the core idea is that fiscal policy is a policy that aims to reduce inequalities, I wouldn’t know how to protest against that,” Finance Minister Pierre Moscovici said at a news conference in Washington.

The minister said it was a “positive development” but he downplayed that it marked a “significant change” for the IMF.

The Organisation for Economic Co-Operation and Development, which is leading the global battle against tax havens and tax evasion by multinationals, welcomed the IMF at its side.

“We’re happy to see this. There is a place for everyone. The Fund can bring a real contribution on economic analyses,” Pascal Saint-Amans, head of the OECD’s center for tax policy, told AFP.

In the corridors, however, a quiet skirmish is underway between the two organisations for the leadership of the tax-haven offensive ordered by the Group of 20 major economies.

The IMF’s Copernican revolution is still in the twilight stage. In its report, the IMF continued to push for a wider scope for value-added tax (VAT), a tax consumption tax that some say is inherently unfair, and on reductions in public spending.

“These proposals are heading in the right direction, but a lot remains to be done,” said Oxfam’s Mombrial, calling notably for the IMF to do more against illegal capital flows which, according to the NGO, cost billions of dollars in fiscal revenues in the developing countries. 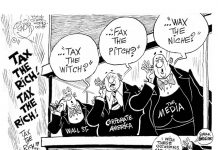 “Christine Lagarde, kept up the sales pitch for a more just fiscal policy”

Would that be the same Christine Lagarde who doesn’t pay income tax ???
http://www.forbes.com/sites/robertwood/2012/05/30/imfs-christine-lagarde-i-dont-pay-taxes-but-you-should/