Xavier Jayakumar condemns the torching of his daughter’s car last night – an act of desperation.

The torching of my daughter’s car at her residence last night is shocking. It is deplorable that such incidents should occur during the period in the run up to a general elections.

I am angry but I am also sad that the situation in the country has descended to this. My family and I are very disturbed over this incident as my grandson and son-in-law were at home when this happened. I thank God that no one was hurt and everyone is safe.

Democracy is about the contestation of ideas. The run up to an election should see issues being raised and ideas discussed in rationale manner. There is no place for violence and intimidation in the process.

I strongly condemn this type of action taken by certain groups of people, thinking that they can intimidate us and frighten the general public.

What has happened will not deter us in any way; rather we intend to work harder to bring, about change. I ask my supporters and friends to stay calm. The actions of a few desperate people will not make us depart from doing the right thing and behaving in a proper and civilised manner.

That is why i have been saying from the beginning that we must get away from the culture of gangsterism and “budaya samseng”. This is the work of misguided youths for whom we are striving to bring about better conditions – to help make them a part of society and in the long run build a better Malaysia.

READ MORE:  When even a minister had to flee

Dr Xavier Jayakumar is the PKR candidate for the Selangor state assembly seat of Seri Andalas. He is also an Aliran member. 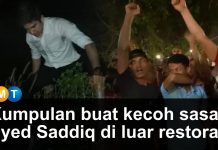 When even a minister had to flee