Until and unless the root causes of ethno-religious conflict or general discontent are tackled, any attempt to resolve the situation may be seen as just fire-fighting, writes Mustafa K Anuar.

In contemporary Malaysia, the act of torching houses of worship, parading a severed cow’s head on the street, tossing pigs’ heads into a mosque, plastering a dead, bloody chicken on your front door or mailing an unspent bullet appears to be taking the place of civilised dialogue and debates when an ethno-religious conflict, or collective dissatisfaction and anger emerges in our midst.

This is, incidentally, not quite the characteristic of a nation that is supposedly aiming to approach that much-touted Vision 2020 status.

It is therefore understandable that the federal government recently announced its plan “to train 250 community leaders this year to peacefully combat an expected rise in ethnic and religious conflicts that result in crime.” The focus is to be on some 50 “hotspot” areas primarily where low-income communities exist, such as high-density squatter areas.

While this proposed endeavour is commendable, one wonders whether this is effective enough to combat ethno-religious tensions and conflicts whose underlying causes may not be addressed or attended to sufficiently. The expertise that these community leaders have would help to resolve some of the community problems to some degree.

However, until and unless the root causes are identified and treated, the trained community leaders may merely play the role of firefighters at best.

In this regard, the capacity of the affected ordinary people on the ground to build bridges — in the aftermath of some ethnic conflicts — should not be underestimated especially when there’s little interference from self-serving politicians that lurk in the corners. The need to survive, among other things, requires some of them to reach out to each other to heal the wound.

In some cases, tensions do erupt in marginalised or poor communities but the underlying causes may well reside elsewhere. Minister in the Prime Minister’s Department Koh Tsu Koon (who’s in charge of this task) may want to train his and his colleagues’ eyes on, for example, the politics of divisiveness – often associated with ethnic-based political parties on both sides of the political divide – that pervades in various guises and forms in mainstream society.

The survival of these parties hinges on the championing of the narrow interests of their respective ethnic constituencies to the extent of fostering ethnocentrism and mutual suspicion. In this context, stoking the fire of ethnic hatred and religious bigotry can be a cinch.

Additionally, there is the institutional racism that is found in groups of various ethnic backgrounds who perceive themselves as being marginalised or abandoned in their day-to-day living. The collective frustration that ensues gets easily mobilised by those who may have their own political agendas that are not necessarily altruistic or noble.

Certain government policies, such as reducing subsidies for essential goods and the privatisation of some sections of the public health care system, that disadvantage the poor and downtrodden can also cause further hardship and deep social cleavages between and within ethnic communities. This in turn give rise to friction and growing dissatisfaction.

Another problem: certain quarters in society aren’t able or willing to respect and appreciate differences of opinion, which can then spark off unsavoury behaviour among certain groups or individuals. This obviously stems from the inability or unwillingness to appreciate the fact that differing views and dissent are part and parcel of democracy.

Diversity of opinions should indeed be celebrated. And yet in many cases, as intimated above, opinions that differ, and especially if they are seen to be against the “interests” of one’s own ethnic community, would incur the wrath of certain ethnic champions.

It is thus unsurprising that, for instance, so-called “liberal” Malay writers writing for The Malaysian Insider are seen and labelled as people who are unwittingly being manipulated (diperkudakan) by the online newspaper itself whose editorial philosophy is generally viewed to be incongruent with “Malay interests”.

Or, articulating views that are perceived to be critical of the government or a component party of the ruling coalition could cost you your job, as experienced by certain deejays and the CEO of a Chinese radio station not too long ago.

The antics and actions of extremist and bigoted groups or individuals that are not curbed or reprimanded publicly by the powers-that-be (and also the so-called “silent majority”) seem to have emboldened others to emulate and flaunt their newfound ‘power’.

Seen from this perspective, the act of expressing racist remarks in classrooms and of urging certain people to go back to their respective ‘homelands’, for instance, makes one wonder whether they are necessarily remote occurrences or isolated cases.

Overzealousness on the part of certain religious leaders can also cause harmful fault-lines between followers of different faiths. It is a tragic irony when religion is interpreted and employed in a manner that is divisive and detrimental to the harmonious relations between Malaysians who come from different backgrounds.

It doesn’t help either when you have certain newspapers that spew news reports and writings that deliberately promote ethnic anxiety and distrust as well as bring about a “siege mentality” among members of particular communities.

Such irresponsible and unethical journalism and editorial policies may have serious implications on the general populace in the long run and result in a substantial decline in journalism standards.

Indeed, Malaysians have been deprived of the kind of mainstream dailies that could have played a pivotal role in promoting interethnic and inter-religious understanding and respect, compassion and peace. These newspapers could have been an excellent platform for civilised exchanges of ideas and views among the stakeholders, thereby reducing or preventing, say, the ugly occurrences of innocent animals being ‘sacrificed’ for human folly.

But, alas, this may be wishful thinking for as long as we have the ownership and control of the mainstream media concentrated in the hands of the ruling coalition or their economic allies, a phenomenon that has been brought about by the existence of restrictive laws such as the Printing Presses and Publications Act.

To reiterate, tensions and conflicts of the ethno-religious variety may rear their ugly head time and again unless the root causes are addressed. Until then, let’s hope the fire will not be overpowering and catastrophic. 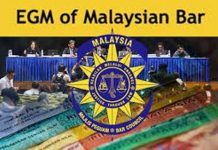 Act on the humanitarian crises; stop the carnage in Gaza and West Asia

Now one of the cow head demonstrators has launched the 1Malaysia tablet….ha ha ha ha… emails are already circulating who he is and what and where he stood in the demo…wkwkwkwkwkwk

Bro Mus…be reminded that the pig head was thrown into the mosques compound..by…none other then…tada….to create racial tension!!!…the cow’s head demo…. and the burning of the churches and sikh temples… and so the most racist and corrupted…winner is…tada…