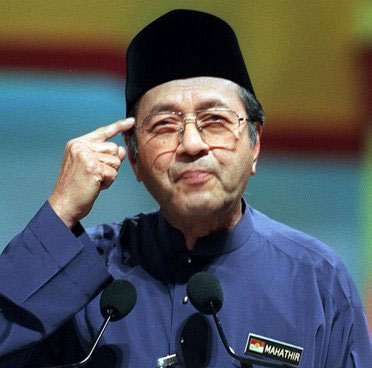 Mahathir suggested that the Japanese would have committed hara-kiri had they been in Abdullah Badawi’s shoes in the wake of the BN’s loss of five states to the Pakatan Rakyat and of its two-thirds majority in Parliament in 2008. But, as Tota observes, the former premier himself missed many opportunities to commit hara-kiri in the wake of the numerous scandals that plagued his 22-year administration.

Dr M carried his Look East Policy too far when he suggested that the Japanese would have committed hara-kiri (suicide) had they been in Abdullah Badawi’s shoes after allowing the BN to lose five states to the Pakatan Rakyat and its two-thirds majority in Parliament. Dr M must really hate him to draw such a comparison as taking one’s own life is shirik – an unpardonable sin in Islam.

But during his long tenure of 22 years as PM, Mahathir himself missed plenty of opportunities to commit hara-kiri. There were financial and political scandals which resulted in huge losses of public funds. No future leader will come anywhere near the number of scandals that occurred owing to his political and financial mismanagement – the BMF scandal, the EPF scandal, the LME scandal, the Mas/Tajuddin scandal etc. If Dr. M had any sense of accountability that he now demands of Abdullah Badawi, he was qualified to commit hara-kiri many times over.

The first three Prime Ministers were lawyers and, by and large, acted true to their oath of office to protect and defend the Constitution, but in the hands of Dr. M the Constitution became a mere piece of paper to be shredded at his autocratic will. My Hindu friend tells me that the Tamils have a saying: What do you expect if you give a beautiful garland to a monkey?

Support the struggle to build a Malaysia based on Justice, Freedom, Solidarity:
READ MORE:  Patriot empathises with police chief’s dejection over corrupt officers

Hara-kiri, many times over

Dr. M recklessly and ruthlessly amended the Constitution many times to centralise power in his hands. He destroyed the independence of the judiciary and the EC, undermined the print and electronic media and trade unions, and appeared to influence the ROS. Armed with draconian laws such as the ISA, the OSA, the UUCA and the Printing Presses and Publications Act, he literally turned a democratic state into a virtual dictatorship. Dr. M qualified for hara-kiri on each if not on all these counts.

His 1983 Constitutional amendments taking away certain powers of the Agong and his brother rulers and his highly disrespectful, indeed crude, utterances against the rulers were more than seditious. I have no doubt that the rulers would have wished that this troublesome politician would commit hara-kiri so that the gangrene’ in the body politic of the nation would be removed once and for all.

Dr M’s 1988 Constitutional amendments literally put paid to the secular democratic nature of the country and opened a Pandora’s Box, releasing grave ethnic and religious problems that continue to fester to this day. Dr. M again qualified for hara-kiri for this.

Under his administration, the gerrymandering of electoral boundaries ensured that the rural heartland held the bulk of the ballots. To make certain that it remained so, his administration fed largely Umno political propaganda through the government-controlled print and electronic media. He blocked the sale to the public of both Harakah and the Rocket. Though BM is the official language, his Ministry tried to deny Aliran a permit to publish in Malay. His strategy of keeping the Malays largely ignorant of the issues to better manipulate and exploit them worked till he quit. For this, he should have committed hara-kiri.

While he was frequently castigating the Malays for their subsidy mentality and warning them if they did not change their mentality, they would move from crutches to wheelchairs, he knew that as long as they ate off his hand, they would not bite it. The end result of this despicable trick is a weakened Malay race, educationally, socially and economically. It is apparent that an inferiority complex plagues many Malays from working and succeeding on par with their non-Malay brothers and sisters of which they are really capable. Dr. M qualifies to commit hara-kiri for the present condition of the Malays.

Dr M’s government was well known for corruption, cronyism and nepotism. He appeared noble when he said that he would not permit his children to seek political power as long as he was PM but he had no qualms when his government enriched them with preferential share allocations, APs etc. One GLC even appeared to bail out one of his children when his business venture foundered and it was saddled with debt. Cronyism produced a class of greedy and grabbing Umnoputras. Umno leaders at all levels masqueraded as champions of race and religion and thus enriched themselves at the expense of a very spiritual and trusting Malay populace. Surely this should qualify Dr. M for hara-kiri.

The saga of Dr M’s sins has not ended. A judge has come out with information not only on Dr M’s interference with the judiciary but also his alleged warnings to several judges at a boot camp. More and more of his political and administrative crimes will be dug up as time passes, providing more opportunities for Dr. M to commit hara-kiri.

I really would recommend a waist-deep hole dug at Dataran Merdeka for political rogues who should be made to stand in it for people to stone the devil.

Originally published in aliran.com on 31 June 2008

Curb on liquor sales is unjustified

Scrutiny of immigration and national registration departments is necessary