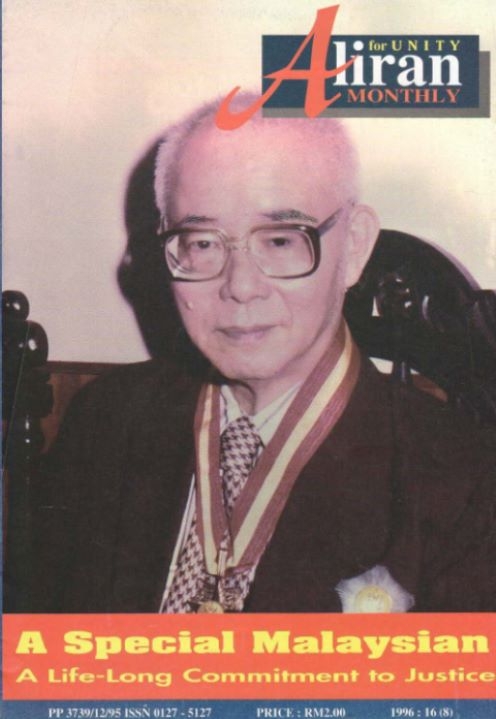 Even after 25 years since his passing, the name Mr Opposition is still synonymous with one politician, Dr Tan Chee Khoon. Till today, no one else is referred to by that moniker.

Those familiar with Malaysia’s post-independence political landscape will remember the late politician as a dominant and popular figure from 1959 to 1978.

Respected by politicians on both sides of the political divide, he was labelled Mr Opposition for his outspoken views, which frequently incurred the wrath of ruling Alliance Party MPs in Parliament.

Privately, though, many Alliance MPs had utmost respect for him. Then again, it was a different era, as MPs respected their political foes from across the aisle, unlike now, when we often witness uncouth behaviour among some parliamentarians.

When Tan spoke, everyone listened, as he was known for his well-researched speeches. Reading parliamentary papers late into the night, he also networked with journalists, lawyers, economists and academics to learn more. This empowered him to deliver excellent speeches.

Tan and DR Seenivasagam were perhaps the most vocal opposition MPs of that era.

Defying formidable economic and physical odds, Tan, born to poor immigrants, carved out an illustrious career as a doctor and outstanding politician. Despite his humble beginnings as the son of a farmer and the challenge of losing an eye at 12, he never wallowed in self-pity nor allowed these impediments to thwart his progress in life.

The challenges in Tan’s life were like a roller coaster, including his path to a medical degree. Initially rejected from medical school due to his supposed infirmity, he was only admitted to the medical college in Singapore after a passionate appeal from his school head.

From a young age, Tan was imbued with the notion that education was the only way to overcome poverty. Respect for human rights and civil liberties was a cornerstone of his lifelong work.

As a doctor, he earned a reputation for being at the service of the poor, often giving free treatment to the needy. For Tan, a helping hand could see no race, religion and colour, as everyone was part of the human race. How many of our politicians today would share this philosophy?

Tan joined the Labour Party and was elected MP at 45. He won a nail-biting contest for the Batu parliamentary seat in 1964 by a mere two votes – after the votes had been recounted six times. A vehement critic of the government, he quickly became a household name in local politics.

It was tough for the Labour Party when, except for Tan, many other party leaders were detained. Perhaps he escaped the dragnet because the government never doubted that his criticisms were constructive and sincere. He also never engaged in personal attacks.

But Tan disagreed vehemently with Lim’s decision to take Gerakan into the ruling Alliance coalition after the 1969 general election because the coalition practised race-based politics. Tan left Gerakan in 1972.

Sadly, Pekemas did not make much headway in the 1974 general election: the party won only one seat, Tan retaining his Batu seat. The party folded in 1982.

Unfortunately, the stress and strain of his multiple roles – running a hospital, serving as an MP, being an active church member and getting involved in many organisations – took its toll on Tan’s health. He suffered a stroke in his mid-fifties, marking the end of party politics for Mr Opposition.

But when this chapter of his life closed, another opened. Like Tunku Abdul Rahman, Tan embarked on a second career as a newspaper columnist and writer. His weekly column in The Star newspaper, Without Fear or Favour, was one of the few public spaces for dissenting opinions.

He was an avid reader: his library contained over 5,000 books, covering interests such as military history, espionage, cricket and Middle East conflicts.

Politicians then were of a different breed: they rose above their political differences whenever the occasion warranted it. Many of the leading politicians knew how to drive hard bargains while maintaining their decorum.

For principled politicians like Tan and those like-minded, politics was never about power or money, but about principles and social justice.

For someone who was known to be anti-establishment and who spurned appreciation for what he had accomplished, Tan was caught by surprise when he was awarded the Tan Sri honorific in 1981 and the Datuk Sri title a few years later.

After his first stroke, Tan underwent physiotherapy to regain his mobility. But in his mid-seventies, he was struck by a second stroke, which rendered him paralysed from neck down, with no ability to speak or swallow. Still, he never lost his zest for life and would smile when friends visited him.

Tan had always shunned racial politics and held steadfast to his conviction that multiracialism in politics was the only way forward for Malaysia. He enjoyed the company of friends and would visit those who had been detained and support their families.

In recognition of his immense contribution to the country, Tan was bestowed Aliran’s Outstanding Malaysian Award in 1984.

After his passing, Aliran Monthly featured Tan’s photo on its cover with the banner: “A Special Malaysian: A Life-Long Commitment to Justice”. In a rare tribute, the entire edition of the magazine was devoted to him.

The main article was entitled “A champion of the people – Without fear or favour, he championed the cause of truth, freedom and justice and of multi-ethnic cooperation and understanding”.

Part of the article read:

If a government finds it necessary to continually add to the arsenal of laws that govern expression of alternative views, it would indeed take a brave and committed citizen to come forward publicly to point out the injustices and wrongs perpetrated in that society.

Tan belonged to that rare breed in politics – a politician who did not jockey for power or position and repeatedly rejected status in favour of staying true to his political beliefs.

In many ways, Mr Opposition was a larger-than-life figure in Malaysian politics – a politician whom many ordinary Malaysians revered. He was a decent man who joined politics out of a sense of public service and duty, guided by his moral conscience.

Till today, many older Malaysians remember him fondly. What a far cry from so many of the politicians we see today!

Rest in peace, Mr Opposition. You were definitely a Towering Malaysian by any measure.

Dr Tan, I remember reading, contributed greatly to the Armed Forces by his lectures at the Malaysian Armed Forces College.

In 1969, I have been to some of Tan Chee koons rallies in Brickfields under Gerakan. My friend Siva also worked in his political office in Brickfields. Siva later went off to USA and settled on there. Tan was loved by many people.

I have been to his clinic in Bt road. First few doctors to open clinics. Next was Dr Arasu .