The Gandhi Memorial Trust presented a posthumous award to the late Karpal Singh for his public service that was consistent with Mahatma Gandhi’s philosophies and ideals.

The Gandhi Memorial Trust of Malaysia (GMT) organised a special event to posthumously confer the GMT’s Public Service Award to the late Mr Karpal Singh for his record of distinguished public service.

The event was held on 30 June 2014 at the Ballroom of the Royal Selangor Club, Kuala Lumpur. The Ballroom was packed to capacity with more than 400 guests attending this event to honour this great parliamentarian.

The guests included high commissioners and ambassadors from more than 20 countries. In addition there were representatives from embassies from more than 10 countries. Many judges of the Court of Appeal and High Court including the president of the Industrial Court were present. There were also several retired judges of the Federal Court, Court of Appeal and High Court who attended.

The special guests who attended included the family of Karpal Singh: Gurmit Kaur (his wife), his children – Gobind Singh Deo, Ramkarpal Singh, Sangeet Kaur, Man Karpal – and several other members of his family. The DAP parliamentary leader, Lim Kit Siang, who was a very close friend of Karpal’s, was also present to honour him.

Also present was Archbishop Emeritus Murphy Pakiam. A number of senior officials of NGOs were also present. They included Mother Mangalam, president of the Pure Life Society; Ramani Gurusamy, deputy president of the National Council of Women’s Organisations (NCWO); and Andrew Khoo, chairman of the Human Rights Committee of the Bar Council.

The evening’s programme began with the observance of a minutes silence with all the guests upstanding as a mark of respect to the late Karpal. The formal session of the programme commenced with the welcome speech by S Radhakrishnan, the chairman of the Gandhi Memorial Trust (GMT).

Radhakrishnan in his speech on behalf of the Board of Trustees of the GMT extended a very warm welcome to each and everyone present. He said the very fact that the ballroom was packed to capacity and some were even standing was clear testimony as to how much Malaysians loved Karpal and they had all come to honour this great Malaysian.

He said Karpal died in a road accident in the early hours of 17 April 2014. His demise shocked the nation. Tributes poured in as leaders from both sides of the devide paid their last respects and conveyed their condolences either through the mass media or by visiting Karpal’s home in Penang. This was remarkable.

Radhakrishnan said that it was fitting that the Penang state government unanimously decided to accord a state funeral with full honours to this veteran lawyer and parliamentarian. He said that thousands of people from all walks of life came to pay their last respects to Karpal at his funeral on 20 April 2014

He said the GMT was a non-political organisation and was established with the objective, essentially, to promote the philosophies and ideals of Mahatma Gandhi.

Radhakrishnan stated that the Board of Trustees of the GMT decided unanimously to present this Public Service Award to the late Karpal as the public service rendered by him was consistent with the philosophies and ideals of Mahatma Gandhi.

He said that the Award was presented in recognition of his long dedicated service to the nation for more than 40 years – a brilliant lawyer, an astute politician and parliamentarian, and above all, a strong human rights activitist. Karpal’s life long passion had been the pursuit of social justice and upholding the Malaysian Constitution and the rule of law.

He said that the award, which would be presented later in the evening, was in the form of a tiger made of pewter to represent the Tiger of Jelutong – a fine piece of craftsmanship. He said the residents of Jelutong had fondly given Karpal the monicker ‘Tiger of Jelutong’. He had not failed them.

He said the award would remind the family and all who were present in this hall that although Karpal Singh was not with us that night, he would never be forgotten.

Radhakrishnan placed on record the appreciation of the GMT to Karpal’s wife Gurmit for her dedication and sacrifices made. The guests attending the event gave Gurmit a standing ovation.

Radhakrishnan ended his speech by stating that the late Karpal was a national treasure. He said that Karpal would be clearly missed and lovingly remembered for his great contribution and sacrifice to make Malaysia a better place that all of us in Malaysia could be proud of.

Before the presentation of the award, four prominent personalities with legal backgrounds spoke on the various facets of Karpal’s life and work.

The first speaker was Zaid Ibrahim, former member of parliament and former minister in the PM’s Department in charge of law. He said Karpal was a fearless lawyer and human rights defender and who had contributed much to Malaysian parliamentary democracy.

Zaid said that Karpal’s greatest contribution as an MP was his push for good governance and for the government to be responsible to Parliament. He said Karpal was suspended many times in Parliament due to his outspokenness. He said Karpal Singh often paid a heavy price when doing what he thought was right. He said he himself was not spared from Karpal’s sharp-tongue during Zaid’s short stint in the government.

The next speaker was Ambiga Sreenevasan, former chairperson of the Malaysian Bar Council and former co-chairperson of the Bersih 2.0 Steering Committee. She said Karpal Singh would be surely missed especially now when extremist voices were getting increasingly intolerable.

Ambiga said this was where we would miss Karpal Singh as a statesman. She said extremism was getting out of control in the country and there was a culture of ‘might is right’ which needed to be changed, and Karpal Singh’s absence would be missed as he would definitely speak up about it. She said we would miss Karpal – not just Karpal the person but Karpal the warrior and voice of the people.

Lawyer Jagjit Singh, who spoke next, whilst praising Karpal for his exploits in the judiciary also reminisced about studying together in the University of Singapore. He said Karpal was a famous ‘ragger’ during the orientation session.

He further stated that Karpal was a brave leader as a law student who led a student protest. He said both of them graduated together.

The last speaker for the evening was Mahadev Shankar, a distinguished court lawyer and judge. He retired as a judge of the Court of Appeal in 1997. In his tribute to the late lawyer, Shankar said Karpal chose to live simply and dedicated his life to pursue his ideals. He said he lived plainly but was lofty in his thoughts. He said he needed to reiterate how much Karpal lived his life in accordance with the values of Mahatma Gandhi.

Shankar compared Karpal to Mahatma Gandhi and said that both were selfless in their dedication to the public. He said Karpal Singh’s voice was a ROAR which could not be ignored. He said it was a roar for redemption that came from the observance of the rule of law and due process.

At the conclusion of the speeches the citation for the Public Service Award was read by Rommel Josef, treasurer of the GMT.

The chairman of the GMT, S Radhakrishnan then presented the award to Gurmit, who received it on behalf of Karpal’s family.

Karpal’s only daughter Sangeet Kaur spoke on behalf of the family after the presentation. She thanked the GMT for organising this special event to honour her father. She said the family appreciated this gesture.

In her emotional speech, she reminisced about how her father never wavered even during difficult times and how he had fiercely protected the notion of equality, non-discrimation, democracy and human rights. She said her father’s sincere love for the country was apparent in almost everything he did.

Sangeet then went on to describe her relationship with her father. She said her father was her pillar of strength and best friend.

At the conclusion of the special event, the guests were treated to high tea and the breaking of the fast (buka puasa).

The MC for the special event was Sharmila Sekaran. 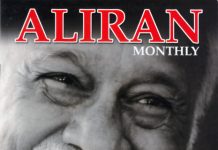 Many parallels can be drawn between Karpal Singh and Mahatma Gandhi, whose ideals and philosophies inspired the creation of the award. Both men contributed the greater part of their lives for justice and the betterment of mankind without fear or favour; often at the displeasure of the power that be. No amount of persecutions or prosecutions could deter or intimidate them from standing up against the forces of oppression acting at the behest the state under the guise of preservation of law and order. Both their lives were ended in a tragic and untimely manner. The capacity crowd with many distinguished and publicly respected attendees is the ultimate testimony of Karpal’s standings in our society.

What about the comments in the 3 para of the article that mentioned the attendance of the many Judges of Appeal and High Court Judges. Plus the president of the Industrial etc etc. Are these not members of the judiciary ?

I am most surprise that members of the present judiciary are invited to the occasion when it is known to the community, especially to the people who help to organise the event. These are people who are proven to be lackeys of the present administration, in fact they are a … disgrace to the profession and no doubt have diminished the very purpose it is supposed meant for.
Their presence had diminished the very purpose of the occasions, they should have been kept aside for bringing disgrace to the professions. It use to be a highly respected profession to be a member of the judiciary. It is now known that a profession that do not deserve to be respected like it use to be !

Don’t think there were any serving members of the current judiciary mentioned in the article.