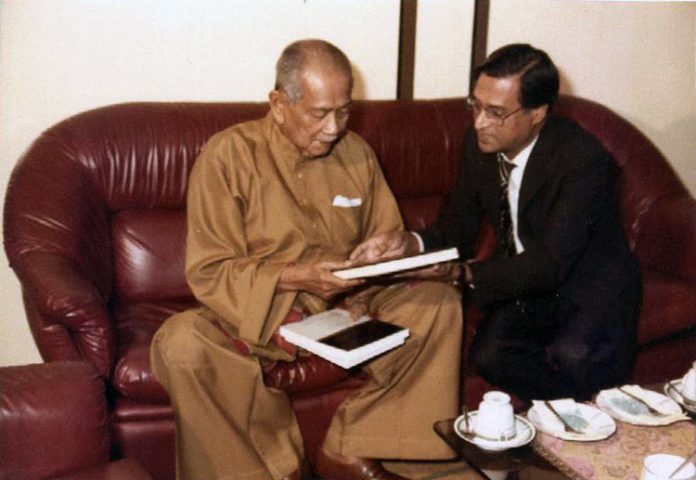 He never went to university himself but his books are used in law faculties. Balan Moses relates the story of law journal publisher Hamid Ibahim.

Hamid Ibrahim may be the perfect example of Tamil Muslims who came to Malaya in the last century, with little more than the shirt on their backs and a barrelful of confidence.

He, like most of them, made good in their adopted county despite the odds.

His is the story of an illiterate youth, unable to speak a word of English, who clawed his way up the ladder of success to stand as one with lawyers and judges.

The 20-year-old, who had lost his mother soon after birth and father three years later, and grew up at the pleasure of relatives, took a ship to Malaya in 1951 to a world of opportunity — and has never looked back.

He turned around a childhood of neglect and despondency through sheer dint of hard work and determination.

“For a man who came here from India with nothing, I feel I have achieved something,” he says of someone thankful for the unexpected in a life that might have ended with the ordinary in Puthukottai, near Chennai.

Instead, the 84-year-old is a well-known legal publisher of local and international renown who knows his Malaysian law as well as most other lawyers.

I am sitting in the living room of his daughter Maimoonah’s plush condominium unit as Hamid plays host to me and photographer Adib Ramli with coffee and murukku and an unending supply of minutiae from nearly 60 years ago.

“They say older people remember best what happened in the early part of their lives,” he says in a clear voice that belies his frail form weakened by poor health that has left him a pale shadow of the handsome man I knew 35 years ago.

But his will to stare adversity squarely in the face, something he has been doing often in his six decades here, still comes to the fore as he tries hard to provide accurate answers to the myriad questions I asked.

He ambles to his room where the former stenographer, who could type 100 words a minute in his youth, repeats the feat with the dexterity born of fortitude and inner strength.

Hamid decided in the early 1950s that his was not the life of the typical Tamil Muslim shop assistant. He had a burning desire to make something of himself, with lack of education the first hurdle to cross.

“I took up English, shorthand, typewriting and book-keeping for a government job in 1957 that offered a salary of 250 dollars, 50 more than what I was getting as a sales assistant at Robinsons in Mountbatten Road,” he says of night classes he attended at Goon Institute.

In the interim, he found time to woo Zaleha Bibi Abdul Subhan, an office assistant at the Tamil Murasu newspaper, their union resulting in three other children — Nasser, Faridah and Ridzuan.

Nasser, a lawyer, follows in his father’s footsteps as a writer of law books (he has written 40 books, Hamid says proudly, downplaying the 10 he has penned).

Maimoonah, also a lawyer, has been living in Melbourne for some time with her children. Ridzuan is a singer who performs at entertainment outlets in the city.

What would he see as his crowning moments in his eight decades of existence?

“I set up the Malaysian Current Law Journal in 1981. It was one of the most interesting points in my life,” he says, raking his mind for names of people present at the event.

Hamid found time in the 1980s to take a diploma course in law in London, which gave him the legal credentials he lacked.

So, what next for the man who has almost done it all?

His immediate objective in life is to complete his autobiography, which he has written halfway and expects to complete this month at his children’s behest.

“I intend to launch it on my 85th birthday on 9 February next year. I haven’t asked him but I expect lawyer Param Cumaraswamy to launch it,” he says of a long-time friend and comrade in law.

What does the soft-spoken Zaleha, 75, who used to act in Tamil dramas over Radio Malaya in the late 1950s, think of her husband’s accomplishments?

“He is hot-tempered but a very hard-working person,” she says succinctly of the man at whose side she has faithfully been for 58 years.

I think Faridah, a trainer, sums it all about Hamid by saying she is extremely proud of her father for all he has done for the family.

“He came to this country with very little and yet managed to educate his children. He never went to university himself but his books are used in law faculties.”

Hamid Ibrahim is the unlikely success story, weathering the storms and vicissitudes of life with a firm belief in himself.

That, in anyone’s book, is true grit.