Will the PN coalition try to hold on to power for as long as it can or call for a snap election and risk being dumped by voters, K Veeriah wonders.

Given the immoral ascension to power by the Perikatan Nasional government, we should not be faulted for thinking that a fresh general election should be held so that the people can exercise their democratic right to vote in a government of their choice.

Given its razor-thin majority, the government of the day should seek a fresh mandate from the people.

Second,  it cannot hold itself out as having the trust of the people when it does not command a comfortable majority in Parliament.

Third, in a functioning democracy, when a political coalition disintegrates (like Pakatan Harapan did), the morally right thing to do would be to seek a fresh mandate from the people.

Sadly, that convention is not something the PN government leadership finds palatable. It does not look as if the PN stakeholders subscribe to the concept of a fully fledged functioning democracy, which includes securing the mandate of the people. That is not surprising, given the political manoeuvring that preceded the power grab by the personalities who were involved in the collusion.

So the lingering question is whether the PN coalition will try to hold on to power for as long as it can or call for a snap election and risk being dumped by voters.

As the ‘incumbent’, PN government has the luxury to stretch its hold on the country until 2023, simple because it is in command, regardless of the numbers. Until and unless the numerical equation shifts, depriving it of its wafer-thin majority, there will be no compulsion for it to call a general election. That was what happened in Sabah, when the Warisan-led government called a snap election, when it was on the verge of losing its majority in the state assembly.

READ MORE:  A year of Perikatan Nasional: How have they fared in government?

So the PN bedfellows will cling on to power at the federal level as long as they have the majority, however slim it may be – even though that would violate the principle of having a government elected by the people, for the people.

K Veeriah is a veteran trade unionist based in Penang

A year of Perikatan Nasional: How have they fared in government? 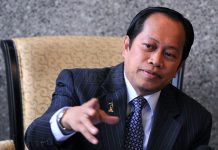 Suicidal to hold snap general election at this time

Turbulent waters beneath the surface. PN must not just cling to power. It will now show now but will find impact on the psyche of the people in time to come. Everything has a cost, isn’t it?

Yes, Veeriah I agree with your views.
The backdoor PM knows he is a goner after GE15.
So, he and his whole absurdly large cabinet will want to enjoy the privileges of power to the hilt!!