Finding out what happened to those missing Malaysians should be top of the agenda of the new government, writes Wishful Accountant.

I refer to the mysterious abduction of Pastor Raymond Koh and a few others and the ongoing Suhakam inquiry.

It is disappointing that the new Pakatan Harapan governments, including all those new ministers have have not said much about these disappearances. Surely the search for the answer for this is far greater than the missing 1MDB billions.

This should be number one on the agenda of the new government. No Malaysian should disappear without a trace in this modern world. We are not in Chile or Argentina during their dark years or in East Germany under the Stasi.

Many ordinary citizens regardless of race, religion or gender will not wish such disappearances to befall anyone, much less their own family members.

The new Malaysia is supposed to be a fully democratic country, with full law-and-order apparatus.

Many have speculated over the manner and method of these ‘abductions’ giving rise to the theory that this may be the work of state security apparatus. This was mentioned in the Suhakam inquiry but strenuously denied by the Special Branch officer in question.

We hope the full story of what happened will be uncovered soon. 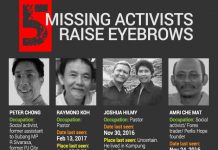 As for Pastor Koh, Joshua Hilmy, etc., perhaps Aliran, family members and friends, church groups and perhaps other NGOs, should write a joint letter or petition the Pakatan government, demanding they resume efforts to get to the bottom of their dissapearance. According to the “squeaky wheel gets the grease” priciple, for democracy to work, interested parties must speak up to demand action from the relevant authorities on issues which concern them.

Perhaps the authorities are preoccupied with 1MDB, prosecuting Najib, chasing after Jho Lo and so forth to attend to matters such as this, so need to be reminded or given a kick in the butt.

I was thinking about these missing persons last evening. Yes! Why no news of actions to get to the bottom of their disappearance and their current whearabouts?

Definitely this abductions arent bigger than 1MDB. It’s another priority case, amongst other cases. These People are taken away over something that isn’t right to the Government and Country. Be it good or bad, something that They did affected the Nation in some way or another. Nevertheless, People are abducted and missing till now. And aren’t MH370 equally important? They are still missing, including the other 3 or more, not just Raymond Koh.

“Multiple media reports have noted Zaharie, 53, was an active member of Anwar’s PKR, and some have suggested he might have sabotaged the flight as an act of political revenge.”

“I am not denying that he [Zaharie] is related to one of my in-laws and that I have met him on several occasions,” he was quoted by The Straits Times as saying.

“In fact, he is a close friend of Sivarasa Rasiah, as we said before,” he said.

“Malaysia Airlines was forced to ground one of its Airbus A330 aircraft after engineering staff found possible tampering with the wiring system, the national carrier said today. ”

“Police have arrested three Malaysia Airlines staff members after wires in an Australia-bound aircraft were found to have been cut shortly before take-off in what was reportedly described as an act of vandalism rather than sabotage.”

I found it rather suspicious that MH370 went missing in the early morning after the Appeals Court found Anwar guilty of sodomising Saiful the evening before.

Also, the systematic manner in which the transponder and other communication channels were shut down at the point where MH370 passed over from Malaysian to Vietnamese air control and then was turned around and flown along the boundary of jurisdiction of Malaysian and Thai military radar, then southwards towards one of the deepest parts of the Indian Ocean.

Had it been due to pilots passing out due to gradual depressurisation or an onboard fire, MH370 would most likely have continued flying northwards and either crashed into the sea or in Vietnam or China.

Less than one year before MH370 went missing, a hacker demonstrated at the Hack in the Box security conference in Amsterdam, how an Android app could be used to remotely hijack a plane:-

Also:-
“This presentation will be a practical demonstration on how to remotely attack and take full control of an aircraft, exposing some of the results of my three years research on the aviation security field.”

There was a security conference at the Grand Millennium Hotel in Bukit Bintang on 7 March 2014, the day before MH370 went missing.

The truth about what actually happened to MH370 will likely only be uncovered if the plane is found and the black boxes retrieved and are still in working order and also if they manage to raise the wreckage of the plane.

The fact that most debris which has washed up are from the plane’s extremities such as the flaperon, skin of the wing, engine cowling and so forth strongly suggests that the fuselage remained intact when it landed on the sea and sank or else thee would be bodies, baggage and other debris which would have been found on the surface of the sea.

Whoever flew MH370 to the the deepest end of the Indian Ocean, whether on board or remotely apparently knew how to make it very hard to find.

Below is a link to a comprehensive article in The Australian where a veteran pilot Mike Keane believes that the disappearance of MH370 could only have been executed by an experienced pilot in full control of the plane until the end.

Save or print out the article, since you will be directed to a page asking you to subscribe the second time round.

FMT of 19 August 2018 published a summarised article based upon the above.
http://www.freemalaysiatoday.com/category/nation/2018/08/19/aviation-expert-slams-mh370-investigators/

This more recent video has all the experts debating MH380’s dissapearance.
https://www.youtube.com/watch?v=Cm1j1fpldkc

Mahathir is in China now, and since the majority of passengers on MH370 were China citizens, Mahathir should ask China to contribute a substantial sum to jointly finance another search for MH370 in the area Simon Hardy believes the plane was ditched and also drawing upon Larry Vance’s expertise.

The government should initiates move to investigate the disappearance of this people. Why till now everything is still no news about the police action to uncover the mysterious disappearance of them. Please do something to relieve a misery of the grieving families.

May be AG Mr. Tommy Thomas can provide answer on this matter. PH goverment have all the receptive Ministers in position let them work for the pay they take to look into all the PH manifesto promises and Malaysian do not expect 100% as we understand that situation can change to achieve all, however there must be some changes to the satisfaction of the Rakyat who voted PH. The AG department should make priority to open all the mysterious missing and murder cases, Altantuya murder must be 1st priority, death of detainees in police lock up. The SPRM should haul up all those who have robbed the hard earned money of tax paying citizens. If all this is not up to the mark then the next GE will have the answer.

Okay…how about if PH Govt put aside “everything” that’s far more important and “every” Ministry knock their heads together and start looking into these Missing Malaysians…Does This SATISFY All Those Who Thinks That The Govt Is Dilly Dallying On Such Matters…Yes…throw aside everything…to hell they care if the economy collapse…security goes haywire…everything…just go search out these missing guys….SATISFIED??????

It’s time to haul up the former IGP together with his accomplices and make them cough out the events leading to the disappearance of all the 4 of them by hook or by crook with immediate effect. We believe they were (allegedly) accessories to the disappearances.

I tot it was just a week ago that the new governance has annouced to reopen the file again.

It’s up to our new PH government to dig it out n get the answer. No more dilly dally

What happened to the investigation? It is still going on or is it no longer the priority of the authority concerned to probe and investigate this case thoroughly?

Thanks for keeping this important matters alive in the public mind. Yes, what happened to pastor Koh and the other missing persons? Its high priority for the PH govt to do so.