Many countries are not in a position to withstand the hammer blows inflicted on their economies by the dreaded coronavirus, Veloo Saminathan writes.

The prime minister’s announcement on 10 April 2020 at 4pm over national TV that the lockdown he had imposed on the nation would continue for another two weeks sent most people groaning in agony – although some in informed circles had expected it.

Parents of schoolchildren, for example, thought it was an imposition while others felt that it was necessary because of the danger the virus posed.

As the coronavirus continue its relentless march, countries have totted up their economic losses.

The US Labour Department has revealed that over the past three weeks alone more than 16 million people had lost their jobs.

Economic experts fear that more and more countries will suffer colossal economic losses as the coronavirus continues to spread. Most countries are on the verge of economic disaster. Their resources are such that they are not in a position to withstand the hammer blows inflicted on their economies by the dreaded coronavirus.

In Malaysia, the central bank has projected economic growth of -2% to +1.5% from its earlier optimistic estimate of 4.6%.

Medical researchers and scientists around the world are frantically searching for a cure for Covid-19. The Israelis are reported to be on the verge of a discovery. In India, it is claimed that doctors have experimented with some drugs in the midst of treatment by Ayurveda and Siddha practitioners.

In Malaysia, the number of infections seems to be on a stable or even slightly declining trend, while the number of cases cured continues to rise. Experts believe that more testing needs to be carried out to break the chain and flatten the curve.

One can only be hopeful and in good cheer. 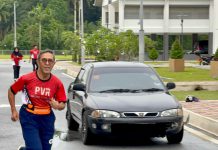