In chaos surrounding the attempted arson attacks on a string of churches, where does the truth lie? It perhaps lies within ourselves, reflects Angeline Loh.

Extreme elements in our society have caused the tears of communities to flow in our country. This country that enjoys a wonderful diversity, yet a peaceful harmony that we, its citizens, believed could not exist elsewhere in the world. Yet, we became so complacent and took our peace and harmony for granted. We were lulled into a sense of false security and became blind to the real threats to our peace and overt goodwill.

Over time we allowed our innate prejudices to take hold of us. We gave excuses for the enemy within ourselves. With the name of God becoming a controversial issue despite the legal process being used as the proper channel to reach a just decision, the extreme elements in our society continue to opportunistically play on our inherent weakness to inflame the situation – to justify creating chaos and anger to guard their own vested interests.

We may guess who these elements are but appear confused as to what to do in the position they have put us. From my personal discussions with acquaintances via e-mail, many good people have refrained from calling for “fire to fight fire” because this never works to bring peace. It is obvious that we ordinary people don’t want chaos and are prepared to await the decision of the Court of Appeal, allowing the legal process to run its course.

Silence doesn’t mean consent nor does it mean that the silent majority will ‘lie down and die’ upon a decision being made. In all our faiths we have been given guidelines of how to deal with situations of incitement to anger and hatred against our fellow human beings; this is the time to put these principles into practice. We even have models in the holy people and founders of our faiths as well as modern day peacemakers and advocates of passive protests like the great Mahatma Gandhi.

Yet, when coming face to face with a situation that demands calm decision-making, we feel stumped and stupefied into forgetting what we have learnt and need to draw upon immediately. We cannot allow ourselves to be swept away by our innate weaknesses and prejudices, as this will allow the advocates of chaos to claim a victory they do not deserve.

When I expressed my gratefulness to the ordinary Muslims who had come out to support the Christians in this time of crisis and admired the forgiveness shown by church leaders of the Tabernacle Church in KL, there were people who said I was supporting the Muslim extremists in the restriction of the word “Allah” to Muslims only. These, who have misinterpreted my resistance to incitement of enmity between Christians and Muslims, should perhaps ask themselves where they stand and who they are struggling against.

The Western media that claim to enjoy freedom of expression have also neglected to evaluate tbemselves. Firstly, they have no understanding and show little or no knowledge of the background of our society. They also prefer to view situations in a black and white way which doesn’t take into account the grey areas that intersperse an issue. I am not surprised that they would interpret an expression of gratefulness for the support given by good Muslims to the Christians in this crisis as being pro-Islamic.

The truth is that the media, including the western media prefer to report bad news. The more positive aspects of a conflict are frequently censored, as this would un-sensationalise the issue and not sell their websites or print versions. In a world where there is so much conflict and suffering, I wonder if people really want to hear more bad news than good news. We only read the news to know what is going on but the media seeks to create situations, not simply report news. Thus, more often we see things through the eyes of the media in a two-dimensional – not a three-dimensional – way. We are not given an analytical view but a flat one. We cannot see what lies behind the picture presented.

So, in all the surrounding chaos, where does the truth lie? It perhaps lies within ourselves. 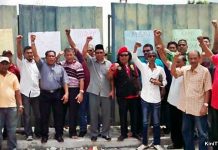 Your faith may be weak, but mine isn’t