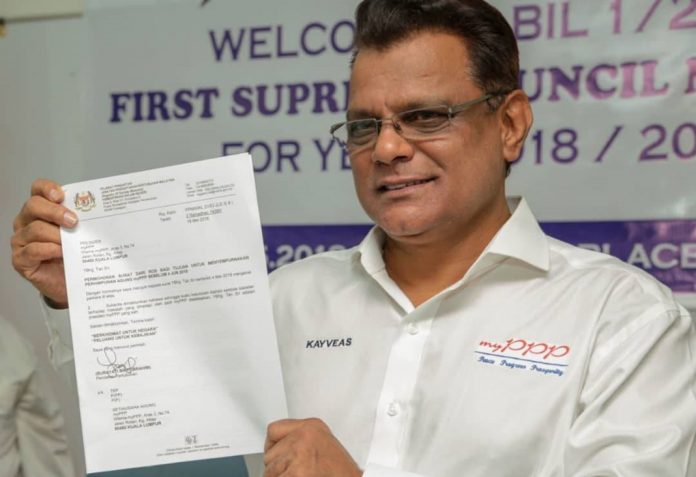 myPPP’s predicament showcases many learning opportunities in Malaysian politics and must be a warning for the future to the new government, writes JD Lovernciear.

The ongoing tussle between the current president of the myPPP political party and the splinter group should not be dismissed as a ‘mosquito party’ fight.

In fact, it showcases many learning opportunities in Malaysian politics and must be a warning for the future to the new government.

Firstly, what is happening in myPPP resembles a typical coup. A group of second-in-command leaders have seized the opportunity to seemingly ‘sack’ their president without seeking their party members’ approval as is required under the party constitution. All they needed was the backing of some BN leaders.

Secondly, it reaffirms how the Barisan Nasional political culture of threats, boycotts and pulling the rug from under a leader’s feet (if the component party leader does not toe the line) is very much alive even after facing an unprecedented defeat in the recent general election.

Thirdly, as you read the media statements coming from both sides of the party divide, it is clear that respect for the rule of law is still a pipe dream among politicians.

The facts and fabrications surrounding the current fracas in the party point to certain truths.

One, if you stand up against Umno you will be trashed by any means. Your unceremonious removal is a foregone eventuality even if it takes bulldozing over the rule of law.

M Kayveas is obviously being attacked simply because he took a dim view of the bullying tactics of BN after having endured them through three previous general elections. He questioned why after asking for the former prime minister’s “blessing” for him to work in the Cameron Highlands constituency three years ago – using his own funds, he was then told to go to Segambut in the Federal Territory.

The price to pay for offending Tengku Adnan Mansor, the secretary general of BN, was high. Kayveas openly said, “Maybe Tengku Adnan should try and stand in Segambut” and questioned why myPPP was suddenly, just days before the much-touted mother of all elections, given only one seat and that too in a constituency that was the fortress of the opposition.

So, as stated by Kayveas, in the wee hours of the morning, a group of supreme council members went to his house, armed with a letter from BN, apparently signed by the secretary general of BN and copied to then Prime Minister Najib Razak. They said Kayveas should resign or face the consequences including getting sacked as party president.

That was not all. Within 24 hours, the motley crew of four or five convened a haphazard press conference in a hotel some 10km from the party headquarters and declared that the party’s supreme council had sacked the party president.

Then ensued a barrage of events as Kayveas decided not to give up the fight against a group of people aligned to the forces of the BN leadership.

Kayveas’ office was ransacked in the middle of the night. Not only were office, party and personal documents carted away, even his working desk was dismantled and taken away.

Guards were stationed at the party headquarters to prevent Kayveas from getting into the office building.

And to add insult to injury, dubious claims were made in the media including the claim that the breakaway team’s call for a party annual general meeting on 26 May 2018 had been advised “verbally” by the Registrar of Societies.

Despite Kayveas having secured an official letter from the registrar that he was the legitimate president and that the party should convene its annual general meeting soon; despite making police reports; despite informing the registrar in writing that the annual general meeting would be convened on 27 May 2018; despite holding a press conference to tell his side of the story, his rivals steamrolled their version of the annual meeting a day earlier, on 26 May, and have publicly asserted that myPPP would remain with BN and they would not recognise Kayveas as the party president.

So this illustrates the undying culture that seems to show no signs of correction despite BN losing so badly in the general election after six decades in power.