In recent weeks, a numbing sense of hopelessness has overwhelmed many of us.

Race, religion and fear are being played out against a backdrop of rising Covid infections in a sea of political chaos, generated by a near absent leadership.

It is as if we are looking at ruins after a war. Our educational institutions are crumbling; unemployment and poverty rates are rising; and above all, there is hardly any semblance of a working democratic system.

The people have never been more divided by race and fear. On one side of the fence, there is fear of losing political power, and cultural and religious identity. On the other, it is the fear of radical Islamisation and of losing economic and cultural relevance.

It has been well documented that people who feel marginalised and insecure in an unequal world desperately seek a semblance of order, control and predictability in their lives. And to regain order, they would usually fall on either of two things: religion and conspiracy theories. This is not particular to Malaysia and plays out, even in the US.

In Malaysia there is a religious shift; a sense that extremist religious movements, championed by influencers such as Mohd Asri Zainul Abidin, are gaining ground.

In addition, more religious subjects are taught in schools; more religious rules and practices are seen in workplaces; and Islamic dress codes are applied, even in police stations.

Another was proposed by the book Pendedahan Agenda Kristian (Exposing the Christian Agenda) by an anonymous writer. The book alleges that a grand secret Christian conspiracy is threatening the position of Islam in the country.

The truth of these claims has never been proven. The alleged perpetrators, whether from the DAP or the many Christian movements, have never been investigated or arrested nor have any documents been submitted to the police.

Fears and insecurities are not new. They have always been there and have even determined some of the clauses enshrined in our Constitution. The affirmative action policies – the New Economic Policy and the National Development Policy – were intended to remove these, but they didn’t.

In carrying out these policies over the last five decades, invisible walls have been erected, segregating the races and creating racial silos in government and even in the private sector.

Although there are many exceptions, those who are locked within these mono-ethnic silos are often insulated from functioning optimally in collaborative cross-racial environments.

The undercurrents of insecurities and perceptions of inequalities are so strong that it is believed that if the Malay privileges and benefits are to stop, their world would crash. This was probably part of the underlying impetus for the Sheraton Move.

Many hardline Malay politicians may even have come to realise that they have wedged the Malays between a rock and a hard place, unable to let go of these privileges and fearing, and that they may not be able to hold on.

Clearly the old ways have not worked. Experts, psychologists and economists would know better what needs to be done. I, for one, am not an expert but here is my two cents worth.

I may want to consider more practical collaborative options that open up schools, educational institutions and other places of employment to enable confidence to grow by putting students and employees in safe supported environments of collaborative learning.

Instead of pitting one race against another, we should consider policies that allow the different races to work together as supporting partners. We should build multiracial learning teams in a variety of different contexts both in the government sector and the private.

Learning in English may also be a game changer. I met an elderly Malay man in his seventies who explained to me in fluent English how, in the 1950s, he had transitioned from a rural Malay school in three years to a racially mixed class in an English school.

English had helped him to broaden his world and had given him confidence to interact with others. Yet, he has not lost his Malay identity. He is still passionately religious.

Perhaps we could transition a few national schools into English schools but within the vicinity of the rural Malay heartland, where the religious and cultural influences can still continue to flow. Perhaps it is time to begin learning and living without fear.

There is much that can be done, but none of this can happen, if the Malays themselves do not initiate these changes to fix our broken systems. It should not come from the non-Malays. That would be like setting fire to tinder.

This may seem like a near impossible scenario, yet Ain Husniza Saiful Nizam has shown us that it can be done. Countless others who have stepped forward to support her. have shown us it can be done.

There is also a young Malay girl who spoke out fearlessly in a YouTube video about police brutality against ethnic Indian detainees. She too has shown us it can be done. In her video, she appeals to the Malays to begin a conversation about race.

The young seem to know. They want to vote and have a say. They are breaking down racial lines and are already learning to work together. The leader must listen.

Our leaders need to know that, if nothing is done, many Malaysians, especially those in the middle and lower-income groups (and the other marginalised people) will have to pay the heavy price of dying as dinosaurs. They cannot afford to hold on to fear.

The world is fast becoming a highly competitive and evolving environment. The future will demand that we learn to reinvent ourselves again and again, even as we stand on our feet.

Change must come mainly from the Malays, who must rise and become agents of change. They must fearlessly take the bull by the horns and right the wrongs that have been done by a few old men who have long outlived their time. 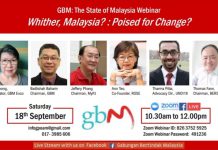 I took a look at the article’s title and its author – and sorry for throwing a wet blanket, but no matter what gems of wisdom are contained within, the Malays will do no such thing.
Even progressive Malays like Khairil and Zaid, have been careful not to touch this topic of education with a ten foot pole.
I apologise to parents who have no options but to swallow the fare they dish out, but for those who can afford to, please do get an education overseas.

This is the real problem!! We are too overcome by negativism and by fear!! We are a nation too petrified to start a reasonable rational conversation with our Malay friends and colleagues about race and education. Let’s find out more about their perspective, find out what is wrong? What can be right? As long as we stay silent and passive, there will be no hope!

This is the only way to have more voices join the fray; not from the top but from the bottom, to start the conversations in small groups. It will not be easy and it may be messy but it is a place to start. We all need to do our small part, take one small proactive step to come out of this tight circle of fear. Have we? Have you?