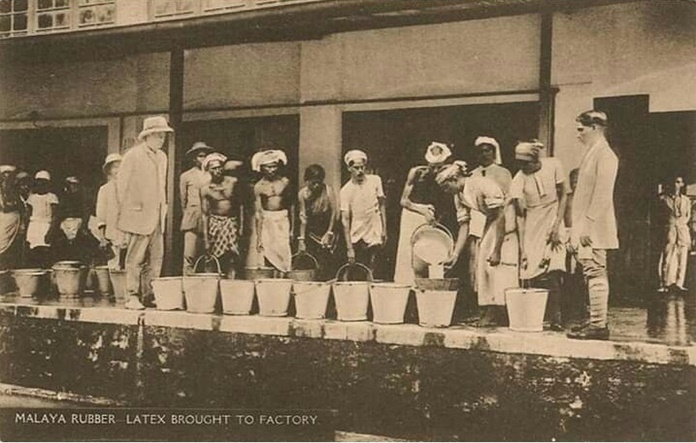 Look more closely at those faded photos and you will see suffering and exploitation etched on the workers’ faces. Veloo Saminathan provides the historical backdrop.

Pictures circulating recently in WhatsApp chat groups were historical for their vivid realism and authenticity.

These pictures, taken at a time when vast tracts of the country’s dense tropical forests were being cleared by Tamil labourers recruited from South India, elicited responses from chat group members. But the responses were invariably confined to assertions that they were great pictures.

“Great”, no doubt, but what about the subjects – the labourers – that the photos portrayed? No one was able to say what these hapless men and women meant to them in the various occupations they were forced into. This may be because of the vast generation gap between then and now.

Judging by their occupations, the labourers in the photographs could be early pioneers – the first wave even. The men, all dark-skinned Tamils, look scrawny, bare-bodied, barefooted with a piece of cloth of uneven length tied around the waist. A primitive form of turban haphazardly covers their heads, obviously to shield them from the elements. The men look grim and forbidding in a helplessly wild sort of way.

The recruitment policy of their employers – British plantation companies – was to select only those from the low rungs of Tamil society in villages in southern India notorious for their poverty. They based this on the belief that only those accustomed to abject living conditions would be able to bear any amount of hardship in their work environment and the type of work imposed on them. In this, caste considerations also played an overt part.

The early pioneers – the first wave – were such men and women; hence their unmistakably forlorn, scrawny, worn-out appearance, their faces devoid of any sense of joy or hope. The granular quality of the photographs graphically heightens this negative aspect.

Despite the privations in a hostile environment, these labourers prevailed and laid the foundations of the rubber industry. They remain unsung and buried in anonymity, many dying prematurely after earning a pittance for their back-breaking toil.

The Tamil women estate workers shown in the photographs also look scrawny in their ragged saris. They were the second rung – employed to plant rubber after the land had been cleared and made suitable for planting in carefully marked-out rows.

Planting was done by hand, using rubber seeds not, as in later years, with carefully nurtured high-yielding saplings. These women workers were under the supervision of white planter bosses, dressed in white, wearing their pith helmets (sola topees). Thus, they planted millions of rubber trees. As the saplings matured, the women were employed as weeders and rubber tappers as seen in some photos.

These hapless people remain largely forgotten except for researchers – some of them Tamils themselves – who earned PhDs and moved on to secure lucrative jobs in academia, international organisations, the private sector and politics.

Critics bemoan the crass, exploitative nature of the system perfected by the capitalists who dominated the rubber industry. At its peak, the enterprise was so lucrative that one writer even labelled Malaya in the 1930s as a “Tory Eden”.

The Japanese invasion in World War Two destroyed this hubris forever. After the war, Chin Peng’s communist insurrection, sparked by the killing of three planters in Sungei Siput in 1948, forced the colonial authorities to declare an “Emergency”.

This, along with the independence struggle, hastened the granting of independence on 31 August 1957, just nine years into the Emergency. In ensuing years, ownership of the rubber industry fell into Malaysian corporate hands before the industry slipped into decline.

They were not treated with respect then, neither are their descendents now, labled as foreigners by some members of the current political class. They still have difficulty in obtaining citizenship in the land they helped to build. And to add salt to their wounds some fellow Tamils also look down on them,

The British Empire did this to millions of Indians. Shipped them across the world and brutalized Indian workers as commodities / laborers to gain wealth. Nevertheless being born an Indian I am proud of my ancestors bravery to explore.

We are naturally born with good culture & shall never give up to develop over-self..

Thank you Mr Veloo for writing. Important contribution that is needed to remind new generations

Lower class Tamils engaged in menial work were also treated badly by upper class Tamils and other upper class Indians. There were Tamil boys and girls from the estates who were bullied and treated with contempt by Indian school teachers, especially in the English medium schools, for seeking to go above their wretched level.

Malaysia owes a debt of gratitude to these labourers that I’m afraid will never be paid owing to racialist politics.

Good article. Attention should also be brawn to the fact that not only did the English colonial exploiters target the poorest sections of Tamil society, these sections were impoverished in the first place by the unjust land settlements policies imposed on colonial India by the same set of exploiters. Most of these labour were brought in as indentured workers who were treated as little better than slaves. They suffered generations of abuse whose effects were can still see all around us in Malaysia. Their tragic story is told in great detail by Carl Vedivella Belle in his book Tragic Orphans. Belle is a one time Australian diplomat who also served in Malaysia.

Another excellent article Veloo. Speaks volumes for the contributions of these workers to our plantation sector.

ABOUT US
Aliran is a reform movement in Malaysia promoting justice, freedom and solidarity.
Contact us: [email protected]
FOLLOW US
Content may be reproduced without alteration but please attribute to aliran.com
wpDiscuz
8
0
Would love your thoughts, please comment.x
()
x
| Reply