With its recent unthinkable and unthinking decision, the Federal Court has been rendered powerless to review its decisions hence forth, laments P Ramakrishnan, adding that this development will perpetuate an injustice for all time to come.

Not only the layman was baffled by the Federal Court’s decision in not wanting to review its own decision but the entire legal fraternity was amazed and flabbergasted. It is difficult to understand the logic or come to terms with its reasoning.

In rejecting Anwar Ibrahim’s appeal to review its 29 January decision barring Anwar Ibrahim from gaining more key evidence such as CCTV footage, medical reports and witness statements from the prosecutors, the Federal Court concluded that it did not have jurisdiction to do so.

In doing so, the Federal Court not only denied Anwar his right to that information, but it denied itself its inherent right to review an injustice and provide a remedy. As the apex court, why should it restrict its jurisdiction in matters of right and wrong?

The three-man panel comprising Datuk Zulkefli Ahmad Makinudin, Datuk Wira Mohd Ghazali Mohd Yusof and Datuk Heliliah Mohd Yusof unanimously ruled – and very strangely too – that Rule 137 of the Federal Court Rules 1995 did not confer jurisdiction on the Federal Court to review its own decision.

READ MORE:  Bar concerned about the ramifications of the Federal Court decision on media freedom

How do we explain the fact that Datuk Zulkefli Ahmad Makinudin had sat on the panel that reviewed the Federal Court’s decision as recently as last month? Did the Federal Court then rely on some other authorities or did it simply override Rule 137? On what basis were the previous reviews carried out? And why didn’t anyone scream that the Federal Court had no such jurisdiction?

Strangely, on 25 February 2010, Datuk Zulkefli asked if the three-member panel could review a decision made by another panel which had already heard the merits of the argument.

Solicitor General II Mohd Yusof Zainal Abiden “argued that the court was not empowered to review its decision as the judgment as delivered by the apex court was final. He said any attempt to relitigate a final decision by the Federal Court was an abuse of the court process.”

Would it not be an abuse of the court process when earlier reviews of the Federal Court were not even acknowledged? Is it even remotely possible that they could not recall such previous instances?

This decision has effectively denied the Federal Court the power to review its own decisions in future. In other words, an injustice will be allowed to persist without a remedy, even if that injustice was glaring and outrageous.

READ MORE:  Bar concerned about the ramifications of the Federal Court decision on media freedom

He further added, “This has brought to the forefront the most outrageous injustice and it is more so because it is a judgment of the Federal Court and is binding on all courts in this country.”

Would it be in the interest of justice to preserve an injustice in our system of justice? Obviously, it is not. That was the reason why on 21 January 2010 the Federal Court, acting on an application by the Chief Justice Tun Zaki Azmi, had reviewed and revised that absurd decision made ten years ago

With this present unthinkable and unthinking decision, the Federal Court has been rendered powerless to review its decisions hence forth. This perverse decision will perpetuate an injustice for all time to come. 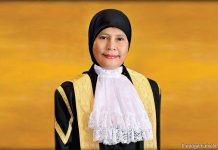