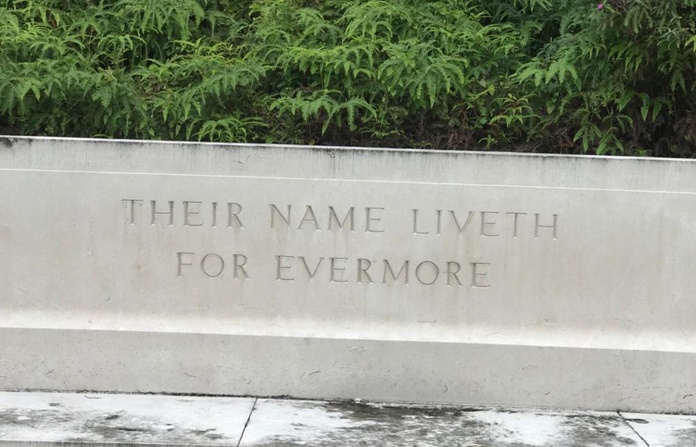 Benedict Lopez believes we owe a debt of gratitude to the soldiers from foreign lands who gave their lives in the defence of our country.

Deeply rooted in the history of our country during World War Two, (1939-45) is the town of Taiping.

Just on the outskirts of this small town, near Bukit Larut, lies the final resting place of many British and Indian soldiers who made the supreme sacrifice – giving their lives in the defence of Malaya during the war.

The Taiping War Cemetery, maintained by the Commonwealth War Graves Commission, honours over 850 World War Two soldiers, of which over 500 remain unidentified.

British and Indian soldiers fought gallantly, defending our country during the Japanese occupation of Malaya.

After many years, I recently revisited Taiping, together with three friends, mainly to learn more about its war cemetery. Regrettably, the government has hardly given much acknowledgement about the role of these unsung heroes.

This was the place where the British soldiers withdrew to, after they had surrendered to Japanese forces who had conquered northern Malaya. Back then Taiping had housed a battalion of the Indian army’s infantry forces with a casualty-receiving station established with the posting of the 20th Indian Combined General Hospital in town.

Taiping was also designated as the rest and re-equipping centre for the 6th and 15th Indian Infantry Brigade during the battles in northern Malaya with abundant medical units stationed here.

After the surrender of the Japanese at the end of World War Two in 1945, the unenviable task of identifying the British and Commonwealth war dead in the vicinity fell on Major JH Ingram, who led a war graves registration unit. Ingram designed and supervised the development of this cemetery.

The remains of soldiers were brought in from the battlefields and from many temporary burial grounds, villages and other cemeteries whose constant upkeep would have been difficult.

A stone wall flanks both sides of Bukit Larut Road, which serves as a boundary between the Christian and non-Christian sections of the cemetery.

Each grave has an upright white stone work, displaying the regimental insignia (if known) of the deceased. Graves of fallen Muslim Commonwealth soldiers face Mecca, in line with their religious belief.

Many older Malaysians may be familiar with this burial ground, but the present generation remains oblivious to the contributions of these brave soldiers.

Being a soldier is a selfless and courageous calling. During the war soldiers had to endure long hours and sleepless nights, often under inclement conditions. Many ended up as martyrs, some of them as young as 23.

As I walked through this cemetery, I tried to imagine the feelings of the parents and families when they learned their sons had given their lives fighting for a foreign country. These soldiers died bravely, nobly, selflessly. They had answered the call of national service to serve in a foreign land, protecting people who were unfamiliar to them.

Together with soldiers from Australia and New Zealand, British and Indian soldiers were again called upon to protect Malaysia during the confrontation with Indonesia in 1963-65. It was a trying time for Malaysia when Indonesian infiltrators entered our country, after then-Indonesian President Sukarno said, “I will crush Malaysia into pieces.”

We must therefore give all the fallen heroes who defended our country the honour and respect they duly deserve.

The next time some of our politicians are critical of these countries, I hope they will spare a thought for these brave men who served our country magnanimously. These are our true friends, and a friend in need is a definitely a friend indeed.

If we are grateful people, then we must impress on the younger generation the role of these courageous combatants in the history of our country. Our history books in schools should record and acknowledge the heroic and poignant role of these soldiers. We owe them a debt of gratitude for their self-sacrificing service to this country.

In fact, we should have a remembrance day every year to commemorate the heroic deeds of these soldiers. At the going down of the sun and in the morning, we must always remember them. Lest we forget.

All photos by Benedict Lopez