While contributions are voluntary, surely those for whom a few million ringgit is pocket change should be a wee bit generous, writes Sharp Observer.

I am flabbergasted to read that our Tabung Harapan (Hope Fund) has barely reached RM100m.

Where are the contributions from the entrepreneurs and billionaires who have made billions from projects and concessions in Malaysia funded by taxpayers? Surely they are morally bound to share some of their profits to repay our nations humongous debts that they may have benefited from in the first place.

While contributions are voluntary and no one should be forced, surely those for whom a few million ringgit is pocket change should be a wee bit generous.

On the other hand, can state governments and federal/state government-linked companies stop contributing to this Tabung. If these companies have extra funds, they should just pay dividends to the government so that it can be used to repay the debts. No need to donate when the money is not theirs.

Sharp Observer is the pseudonym of a regular follower of aliran.com 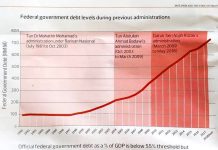 What would happen if BN continues its reign?

Ask not what the nation can do for you but rather , what you can do for the nation.
Yes, if more billionaires and millionaires rakyat are to donate to the Tabung Harapan generously, the amount in its till may be more.
But who are we to demand others to do their part – it is , after all, a voluntary initiative!!

Where is tat idiot named najib…. is he not a ex-pm of malaysia. why is he not contributing to THM.. what story is he going to tell malaysian..hipocrit n liar..

What is he going to donate, the stolen money from the rakyat?

There is so many ways to recover and plug the leakage… If its done properly, there should be enough funds…as the donation figures didn’t even hit 100mil, its just shows the sort of people live in Malaysia.. Get practical and get on with the reform task

All the BN & UMNO cronies and all goverment department top officials, Pengarahs property and bank accounts should be investigated and their income tax returns should be rechecked. PH goverment should take back all the ill gotten money and property to pay back the countries debts which is the rakyats debts too.

They are the takers, not the givers!

Umno and Bn former MPs should contribute more as they have been earning big cash for these 60 years of their reign..but where are their contributions..