Regular patrons at the local watering holes tend to be well-informed and vocal about many issues confronting the nation. Tota puts his ear to the ground and shares what he hears.

The Teh Tarik Stall and the Kopitiam are two places which attract an interesting mix of people – true Malaysians who cut across ethnicity, religion and culture.

They are well-informed and vocal about many issues confronting the nation. Their opinions and comments give us plenty of food for thought.

JP1: Quite some time ago, Rais Yatim said that 10 states were selling titles. We can guess who the buyers are – but he never identified the sellers.

JP2: You don’t have to be a rocket scientists to know who the sellers are.

JP1: Now some self-appointed “royalty” figures are selling titles and, it appears, takers are even prepared to pay RM100,000 for them.

JP2: Ours is a very feudalistic society and as long as we “bodek” title holders this problem will continue.

JP1: I know that the MCA’s decision not to accept any cabinet or government post was just poker bluff. Remember, Siew Sin said the same thing after MCA got a thrashing in the 1969 elections. In no time they were back with the Alliance.

JP2: The lure of Cabinet and other government posts which bring with them lucrative pay, contracts, taxi licences etc. etc. is too hard to resist. So history has repeated itself.

JP1: Yen Yen is back in inaction at the Tourism Ministry. Soi Lek, the shameless, will continue as Chairman, Penang Port.

JP1: Paul Low has had the fastest transformation after being appointed Minister in the PM’s Department.

JP2: Yes, even before he was sworn in as minister, he issued a statement that the MACC is independent.

JP1: One must really be either daft or stupid to say that. I think he hasn’t heard about MACC’s inaction in its investigation into Taib’s alleged corruption as hinted by the Global Witness video and Najib’s and Rosmah’s case so well documented by Deepak.

JP2: What about the corruption in the Ministry of Youth, Sports and Culture? No accounts were presented for the RM20m – good taxpayers’ money – spent on the London Olympics.

JP1: Maybe Khairy will nudge Zolples, Director-General, NSC, and get him to release the accounts.

JP1: Did you see the advertorial in The Star about the ten most powerful women in Malaysia headed by Rosmah?

JP2: Rosmah heading the list is a joke. She’s placed ahead of Ambiga, Teresa Kok and Nurul!

JP1: Rumour has it that she is the one wearing the pants in Najib’s palace in Putrajaya. So you can say she has power!

JP2: We have a lame duck PM. Maybe the bling from the expensive diamond ring is blinding Najib into submission.

JP3: If there is a branch of Madame Tussauds in KL, she will occupy pride of place among the waxworks.

JP1: Did you read the Deputy Minister of Education, Nancy Yap, calling upon the Opposition and the people not to politicise education.

JP2: Yes, she must tell that to Umno. The goons who are vocal about decolonising our universities haven’t realised how successfully Umno has ‘colonised’ the universities as well as the entire education system. All Vice-Chancellors and most of their deputies, deans and professors are Malays. The same goes for the 20-odd teacher training colleges.

All or nearly all the directors of the various divisions in the Ministry of Education and the heads of all the so-called premier schools are Malays.

JP1: So lady, don’t preach to the Opposition and the Rakyat. Start preaching to Umno.

JP1: What sort of service do you provide?

JP2: About 60 per cent of the population are not supposed to gamble but many do. To buy numbers at the 4D, Toto and Turf Club outlets, punters do not have to produce their MyKad but to collect prize money they have to produce identification. That’s when I come in. I collect the prize money on their behalf for a small commission – 10 per cent-lah.

JP3: Can you survive doing that?

JP3: Malaysia is a gambling nation. In addition to illegal gambling, football gambling and even election gambling, there are about a dozen draws per week conducted by 4D, Toto and the Turf Club. Boleh hidup-lah. Macam Umnoputra middlemen – Macom – makan commission.

JP1: Did you read about the hospital in Johor calling upon its employees to do the needful to reduce their weight in an effort to fight obesity?

JP2: We should do something similar to the Cabinet. Do you remember Hussein Onn got very upset when his personal physician, Dr Pillay, suddenly died of a heart attack. He sent out a circular to all civil servants to exercise regularly and keep fit.

JP1: Yes, there are too many fat cats in the Cabinet. Remember two very bulky ministers, Samy Vellu and Ling Liong Sik?

JP3: The joke then was that as representatives of their respective communities, they added a lot of weight in the Cabinet – combined, about 250 kilos.

Tota is the pseudoynm of a regular contributor to our Thinking Allowed Online section. 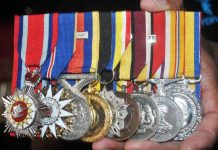 Salute to thee TOTA, I beieve your list of crita-crita in the warongs, teh – tearik and kopitiam has not been exhausted! BTW the bit on Rosmah was the icing on the cake!
It you sit on over RM1.2 billion without having to be an MP nor Senator but share the PM’s bed, that IS Power for you!
What one get by tenacity and driving ambition from TKC days – who doesn’t know!

The porn artist himself knows very well he is most unsuitable for any cabinet post, not that he doesn’t want to otherwise he would not have stayed in politics. Hence he is so willing to have no hesitation to imposed the same condition on everyone’s else in MCA.
To justify his position as port chairman he again has no hesitation to accept NYY being appointed into the tourism board. His appointment as the port chairman is only his share of the loot for permitting MCA to remain as part of BN. Why do you think MCA is so badly rejected in the GE ?