Rsearchers and students have to be trained with morality in mind when considering the implications of their research, says Douglas Teoh.

In his article on The Malaysian Insider, Professor Krishnan rearticulated in contemporary form, the arguments of Flexner, who regards curiosity and “the freeing of the human spirit” as the crucial traits for researchers.

The entire premise hinges on one notion: that passionate, purely interest-driven research can lead to unexpected massively beneficial outcomes. As such, we need to encourage curiosity and creativity to the fullest!

Indeed, there were many citable research studies with purely unintended consequences; however, Professor Krishnan’s optimistic piece conveniently neglects a major issue, which I hope to elucidate through this short essay.

Creative research output as an end-in-itself

Perhaps the most troublesome idea which Krishnan talks about has to do with creative research output as an end-in-itself. This is similar to the idea advanced by aesthetes like Wilde, that art whose singular function – is to be art. Outside the realm of the arts, though, is it actually wise to advocate such a viewpoint?

But there’s something problematic about this notion which can be illustrated by using an example: Psychology graduates are taught the Stanford prison experiment as a permanent part of the course[1] . While one is drawn to the immense benefits of the research to the advancement of psychology, we are forced to reconsider how much creative licensce a researcher should be allowed to hold. Zimbardo’s purely curious expectations started the research, and his twisted fascination of its development permitted the abuse to continue for five days.

In short, the creative may become destructive if left unchecked. A good illustration would be the case of Victor Frankenstein, the scientist in the eponymous novel written by Mary Shelley. Victor’s zeal to learn the ‘secrets of heaven and earth’ led him to experiment and eventually create his monster. Horrified by what he felt he could not handle, his abandonment of his ‘project’ eventually led to the deaths of many.

Ethics and morality as a guidance framework

As a psychology graduate, ethical considerations in research are especially salient to me – we are taught to consider potential outcomes (pros versus cons) of doing a certain research, as we involve actual human beings. If we are fascinated about the effects of rape on victims, we cannot subject someone to a rape simply so we can study it.

Neither can we approach victims and ask how they felt about being raped – especially since traumatic wounds may reopen. Thus we’re constantly forced to weigh: is the benefit of knowing how rape affects human beings enough to justify hurting these people again?

In an attempt to transmute creativity into something more productive then, we need to necessarily impose some restrictions. In this case, Chomsky’s proposition makes sense. We need to be guided by some fundamental moral principles as a framework, for example, of Justice and Beneficence. Doing research for the sake of research may have destructive consequences, and thinking about the practical implications (thinking about how research can help humanity) is a crucial part of the process to ensure this does not happen.

Thus, researchers and students (whom I consider to be researchers-in-training) have to be trained with morality in mind. In any attempted research, the university is obliged to help them reconsider what type of results they hope to achieve, and what implications there might be. It would be better if they can also surmise what negative implications can arise and how best they can avoid misuse of their theories/findings in an exploitative manner.

In fact, this is by no means a difficult problem. In addition to the necessary parts of a research process, a researcher need only ask these two questions: “What benefits can I bring to society with this knowledge I discovered?” and “What are the negative effects that might arise from my release of this knowledge?”

Asking the two questions above is, I believe, a moral imperative for creative researchers. We always hear a cliché quote when we tell people to study hard, and that applies strongly here: “Knowledge is power”. But, to quote Uncle Ben from Spiderman: “With great power comes great responsibility.” To isolate knowledge from responsibility, then, would be a great misuse of power.

Note: The Stanford prison experiment, where 24 bright university students (mentally sound and physically healthy with no criminal records) were selected to role-play a prison situation, either as a prisoner or a guard. The results were shocking: the prisoner and the guards completely internalised and settled into their roles, and role-play ceased being a “play”.

The guards took their responsibilities very seriously and prisoners were degraded – forced to undress and having “rights” removed upon disobedience (i.e. mattresses, the use of sanitation bucket, their own cell). Indeed, in a more twisted manner, these methods of punishing can also be said to be a “creative” exploration of the prison guards in pushing boundaries. 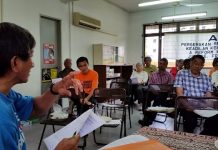 Being the best universities means knowing what the best students need

How Indonesia’s Islamic universities are different