When Kit Siang visited Pasir Pinji market (23 April), well, I thought I’d have a chance to see him there and perhaps my old hawker friends.

I was the state assembly member there in 1990.

Pasir Pinji market is at the heart of what is going on in the Pasir Pinji state constituency, which is part of the Ipoh Timor arliamentary constituency.

The response to Kit Siang’s visit was enthusiastic and warm, and I could see in the hawkers’ eyes that they appreciated it very much that he personally took time off from the scathing battle in Gelang Patah, Johore, just to see them – his old constituents.

A surprising highlight and befitting end to the visit was when an old Indian Malaysian man, instead of shaking Kit Siang’s hand, gave him a spontaneous fatherly hug.

After this, I retired to have a chat with my long-time hawker friends. One former banker friend came and join us, and with a worried face, said that he was concerned that Kit Siang stands a very slim chance of winning the Gelang Patah seat.

I pondered for awhile and answered, “Yes, if Umno resorts to an intense xenophobic campaign aimed at him personally and the DAP, then you are right.”

“And if the avalanche of gutter journalism from the subservient newspapers and television is stacked against Kit Siang without impediment, then yes, the chance is very slim.

“And if Barisan Nasional pours in tons and tons of money donated by super-rich cronies into their campaign in Gelang Patah, then the chance is very, very slim.”

“And if the Election Commission heaps all its effort against the opposition, YES the chance is worse than slim.

“Then how if he loses?” asked the former banker.

“I hope not, as he is the personification of political decency, honesty and civility,” I replied. 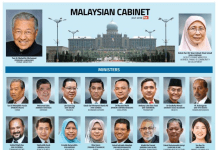 New PH ministers, deputies must be role models of service to people, not self

Democracy has triumphed; time to work in solidarity