An investigation of the Malaysian electoral system by Mark Tan finds that the EC deputy chairman’s likening of it to the UK system is highly flawed.

Wan Ahmad, deputy chairman of the EC, through an interview carried out by the Malaysian Insider after GE13, asserted that “Britain, already a few hundred years practising democracy, until now it uses first past the post”. Perhaps the suggested inference would be that Malaysia’s electoral system may be compared with and is on par to that of the UK; alongside first world and democratic countries.

The purpose of this article is to assess the truth of this proposed inference. This is important as it is seen in light of two issues:
(1) the Parliamentary Select Committee on Electoral Reform’s 2012 recommendation that the EC should review its stance on improving the ‘first past the post’ system and consider a ‘proportional representation’ system; and
(2) the EC’s task of making recommendations to parliament in re-delineating its constituencies by the end of this year.

There are indeed similarities between Malaysia and the UK, in terms of the electoral system, but I am convinced that the dissimilarities far outweigh the similarities. Hence, Wan Ahmad’s analogical comparison is a false one.

In fact, one would realise that there are serious flaws in the Malaysian electoral system which must be addressed adequately by the relevant authorities. If remedial action is not taken, Malaysian democracy is at stake.

Alongside the ‘first-past-the-post’ system, there are several other factors which help ensure (to an extent) proportional representation in the democratic elections of Westminster Parliament.

What then would distinguish the UK from Malaysia, in terms of the electoral system?

Take a look at the Parliamentary Voting System and Constituencies Act 2011, which reduces the seats in the House of Commons from 650 to 600 for the 2015 general parliamentary elections; in an effort to uphold the principle of ‘one person, one vote, one value’. The law generally (with minor exceptions) provides that each parliamentary constituency cannot be larger than 13,000 km² and that the number of voters in each constituency must be within 5 per cent of the electoral quota.

To put it simply, the number of voters in each constituency would be more or less the same. On the contrary, this principle is sidelined in Malaysia. In the recent elections, for example, the parliamentary seat of Kapar had 144,369 voters, while Putrajaya had only 15,798 voters.

This is problematic as it exhibits signs of manipulating the boundaries to establish political advantage for the incumbent government. Representative democracy in Malaysia, with such arrangements of the constituencies, would be a misrepresentation of the people, rather than a representation.

Allowing an alternative comparison, the principle of ‘one person, one vote, one value’ in the USA is given constitutional status and is covered under the ‘equal protection clause’ of the 14th Amendment. This would help to prevent any form of over-representation, under-representation and inequality in voting power.

Should not this interpretation be applied to Article 8 of our Federal Constitution as well? The Constitution provides that all citizens are ‘entitled to equal protection of the law’? This is what is severely lacking in the Malaysian democratic processes and ought to be addressed.

The UK Parliament’s commitment to free and fair elections has also led to the enactment of the Fixed-Term Parliaments Act 2011. This Act removes the Prime Minister’s discretion in advising the Queen on when to dissolve Parliament and call for fresh elections. In other words, the Prime Minister would not be able to call for elections to his party’s political advantage. The elections would then occur regularly in a fixed five-year cycle.

This would ensure a level playing field between the incumbent government and the opposition. All parties would be able to prepare adequately and with due notice for any upcoming electoral campaigns.

This, of course, is absent in Malaysian electoral laws. Article 55 of the Federal Constitution allows the dissolution of parliament by the Yang di-Pertuan Agong (at the request of the Prime Minister) prior to the five-year limit.

As for Malaysia’s Election Commission, it was established by virtue of Article 114 of the Federal Constitution. But its independence is reasonably questionable as it falls under the purview of the Prime Minister’s Department. This raises a concern of apparent bias in favour of the incumbent ruling coalition.

Even if there is no actual bias, justice must still be seen to be done. The perception of independence is almost as important as its actuality.

It is true that Prime Minister Najib Razak has announced that the EC would report instead to a Parliamentary Select Committee. This is a laudable step in the right direction, for it permits a bipartisan scrutiny upon the activities of the EC. However, until the details are known, nothing much can be said to assess whether it would improve the credibility of the EC.

The possibility of proportional representation

Though the UK Parliament adopts the ‘first-past-the-post’ system, other electoral systems are also used in the UK. The Northern Ireland Assembly adopts the ‘single transferable vote’ system which ensures proportional representation. Both the Scottish Parliament and the National Assembly for Wales adopt the ‘additional member system’ to ensure a fairer distribution of seats in line with the popular vote.

If the Election Commission is genuinely concerned about upholding the democratic processes of the nation, then it should be open to the possibility of adopting more proportional forms of representation like those outlined above. Concrete and practical actions are far better than loosely worded commitments to democratic principles.

This chance of concrete action, of course, would be given to the Election Commission in their recommendations on the re-delineation of parliamentary constituencies by the year’s end.

With the above, it can be safely concluded that the similarities between the UK and Malaysia with regard to the electoral system are overridden by its dissimilarities. The point of this article is not to hurl unwarranted criticisms towards the Election Commission or the Malaysian electoral system, but to offer insights into how we can ensure ‘fair play’ among political parties and bring about a more proportional democratic system.

A healthy democracy would pave the way to a more cohesive Malaysian society. Then, we could truly work towards national reconciliation, keeping in mind the two particular aspirations of the Rukunegara:

Mark Tan is an Aliran member based in Penang. 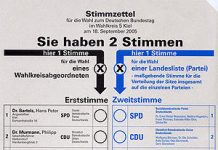 Good article, though a little hesitant. Problem is, though fairly simple to understand by average people would be considered beyond the ‘below average’ EC understanding. For reasons best known to them.

What is the power of this Parliamentary Select Committee? What will be its members composition? In case the selection of the chief of EC cannot be agreed by members of the Select committee,then how it is going to be decided? If it is going to be decided by the parliament,then it will be in no different from the present(bcos BN has more members than the opposition).
As it is now, the EC chief is appointed by the PM. Which it means PM is his ‘boss’.So who will want to do things which displeases the boss and get sacked?

A fairer and more equitable electoral system for Malaysia, yes. But will BN risk their own cosy position to implement it? As long as they procrastinate, this will remain a dream, nothing more.

Mark Tan cannot be more precise when he mentioned the independence of the EC must be SEEN to be fair also, not just in actuality. In fact, if all parties are fair, it does not really matter which system to adopt as they will ensure that the system adopted is fair and would not be manipulated to the ruling coalition’s advantage. However and unfortunately, we regret to note that the existing system are manipulated and exploited to the advantage of the ruling coalition. Unlike in the UK, our EC were placed under the purview of the PM’s department and though the PM has suggested that EC shall report to a perliamentary select committee (PSC), we do not know if this is a permanent directive in which case the act under which EC was established need to be amended in Parliament. The PSC shall consist of members from both sides with equal votes to be meaningful. Otherwise, it is just a cosmetic change.

First past the post system is a few centuries old, it is now 2013, besides look at countries that adopted the system are now in a … shambles. A lot of the countries that adopted the system have changed into the proportional for sometime now. Lives have to move on with times, one cannot progress without change, in Malaysia this system is being used by Umno for themselves to remain in Putrajaya. This is indeed a typical example of what Umno will do to stay in power, most of all a true reflection of what they truly are !