Ordinary Malaysians too are yearning for real possibilities: they want their federal government to be more democratic, transparent and accountable, observes Mustafa K Anuar.

A controversy appears to be brewing especially among certain netizens over an apparent new slogan that is to be unveiled by no less than Prime Minister Najib Razak called “Endless Possibilities”.

Horns were locked over its origin between proponents and opponents of the catchphrase. The detractors claimed that Israel came up with this slogan first only to be copied by the Najib administration. Others argued that Mongolia (sounds familiar?) got it first as shown in their CNN advert recently.

To be sure, it really doesn’t matter who dreamt up that idea first. Malaysians who have been drenched with slogans over the years, particularly since the Mahathir era, should realise by now that what matters most are the policies and the determination of the government of the day to tackle pressing issues that ordinary people face. These issues include the rising cost of living, ethnic and religious polarisation, the intra and inter-ethnic economic gap, ethnic and religious bigotry, insecurity, unemployment and poverty.

We have seen, for instance, enough number ones that are draped in the national colours in bus stops, government buildings, on T-shirts and jackets, etc. All these may not add up to much at the end of the day – especially when ethnic and religious bigots are still raging and flaunting their new-found audacity.

These social problems require urgent remedies that go beyond mere slogans. They demand sterling leadership that is capable of exploring several possibilities of tackling them in a serious and concerted fashion. If we need reminding, the “Bersih, Cekap and Amanah” mantra of yore, for instance, has come to pass without much impact on the national psyche.

Furthermore, the leadership that is needed won’t shy away from constructive criticism articulated by the people, much less tell the people to shut up or, worse, go back to “where they came from”. In fact, real leaders of calibre would appreciate the fact that those Malaysians who love their country are among those who are critical of the way the country is run. Those are the ones who speak truth to power.

That is why Communications and Multimedia Minister Shabery Cheek’s recent suggestion to initiate a law to force premises or buildings to fly the Jalur Gemilang as an expression of patriotism sounds rather, to quote vocal former minister Zaid Ibrahim, “loony”. Flying the flag is only ONE of the ways of showing one’s love for the country. There are other ways and possibilities, too.

Ordinary Malaysians too are yearning – after more than 50 years of political independence – for real possibilities: they want their federal government to be more democratic, transparent and accountable to the very people in whose name the ruling elite rule. Why should they be bullied, brow-beaten and bluffed by the very people to whom they give their mandate?

More possibilities should be opened up for concerned citizens to express their views in the media, in the public domain and elsewhere so that they can be part of the country’s democratic process, so that they can help chart their own and the country’s destiny. And to ensure that this happens most effectively, restrictive and oppressive laws must be repealed.

But possibilities should also have their limits, too. Tax-paying Malaysians, for example, cannot afford to be witness to more possible leakages in the government that bleed the state coffers dry. Neither can they afford to have politicians, ministers and even senior government officials who still brazenly open their mouths faster than whatever grey matter that inhabits their brain can process.

Indeed, there has to be an end to such insane and vulgar possibilities. 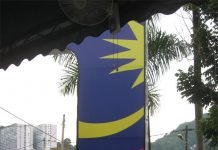 Mahathir started the BCA and now Najib , the one with more slogans(1Malaysia and followed by Endless Possibility which is now a laughing stock among the populace) and acronyms(BRIM,PRIMA,TEKSIMA,KERIMA,IM4U and bla bla bla…).How much of his time is spent on engaging the so-called PR consultants to coin some fantastic slogans or cronyms just to shore up his popularity,than solving the nation’s pressing issues mentioned.

What is the use of all those slogans? They used to be fairly effective during Mahathir’s time as morale boosters to inculcate the feel-good psyche among the common people with the believe that they are on par or at the very least on their way to catch up with the top nations of the world. Remember slogans such as ‘Malaysia Boleh’ and ‘Wawasan 2020’? But that was before the Asian 1997 financial crisis and the Internet where the people saw the hollowness of all the slogans. Worse still, we found ourselves being left further behind by small nations like Singapore and Taiwan. Now, with a populace which is better-informed and if you like to put it, more cynical, what use would it be to bring in more slogans? In fact, it would do the government good to make an objective study on the degree of success of 1Malaysia before even coming out with a new slogan. By the way, what is the yardstick that can be used to measure 1Malaysia?

Slogans are meant to mean as empty promises only especially if thy come from the P.M., and from Umno, a good example is the promise that Najib will build one million affordable houses if the voters were to reelect him and all the morons of Umno to remain in Putrajaya.

Or is he now saying because he isn’t given the majority votes to remain there and above all he is in Putrajaya because of (the) gerrymandering, he remains in Putrajaya ?

No doubt (they bought their) way to remain as tenant in Putrajaya and … therefore not obliged to keep … promise ? But a promise is a promise unless, like everything else, the meaning of a promise is just a slogan and not meant to be kept !