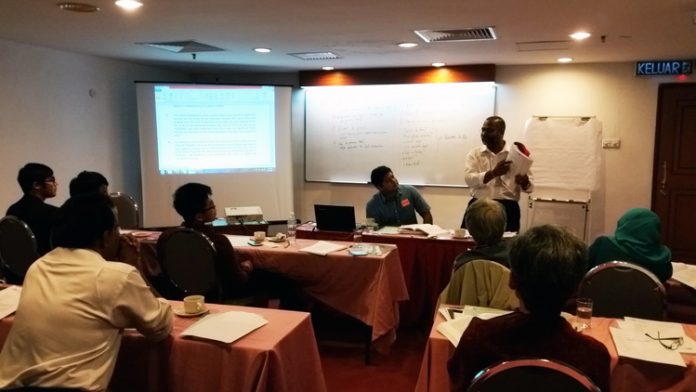 “When someone walks into a police station, they should be able to walk out, unless they have a heart attack. There is really no reason for anyone to die in police custody,” remarked a participant at a one-day training workshop for watching brief lawyers at inquests into deaths in police custody.

The training was jointly organised by Aliran, Suaram and Penang Legal Aid Centre at Continental Hotel in Penang on 23 May 2015 and supported by the Penang state government. Grave concern has been expressed over deaths in police custody, and the workshop was an attempt to galvanise support to make the police more accountable through inquest proceedings and the newly set up coroner’s court.

A total of 19 participants consisting of concerned lawyers, chambering students and activists attended the training.

The programme for the day started with lawyer-cum-trainer M Visvanathan getting the participants well versed with the portions of the law in the Criminal Procedure Code which dealt with the handling of inquests.

In the next session, participants were given a first-hand account by the trainer of the existing discrepancies between legislation and the current practices in cour. He also described the difficulties in getting documents from the court and how this works against the purpose of the inquest (i.e., trying to get to the truth of the matter of how and why a death resulted in custody).

N Yohendra, the second trainer helped participants explore the role of the media and civil society in pushing for change and getting accountability over deaths in police custody.

In the afternoon, the participants went through three cases of deaths in police custody in detail, i.e. Cheah Chin Lee, Gunasegaran s/o Rajasundram and P Chandran.

It was only in the case of P Chandran that the coroner ruled the police were responsible for his death and had committed unlawful omission by not giving Chandran his medication and sending him to hospital despite knowing that he was under medication. Most inquests heard do not result in the police being held accountable for deaths in custody.

Finally, the participants were given a case study to work on. This was interesting as it was clear that participants had paid attention during the previous sessions and feedback included participants insisting on independent second post mortems, making applications for bodies to be refrigerated properly while awaiting the second post mortem and questioning closely the ‘official’ report made about the custodial death in the case study.

What was encouraging was some of the younger lawyers in attendance voiced their willingness to take up the challenge and offered to help watching brief lawyers in upcoming deaths in custody cases.

Here’s another video on our rights when stopped or apprehended by the police. Share it with your friends and relatives: