And as we scream the lyrics to the poem Auld Lang Syne without understanding its true meaning, let’s reflect on how we can make 2016 a better year economically, politically and socially, says Adrian Lee.

As the nation prepares to usher in 2016, resolutions are made about losing weight, saving money and being a better person.

The holiday mood, however, is dampened as we read about the prices of pisang goreng, kuih and satay going up.

After the hike in train fares, we unenthusiastically await the annual hike in bus fares because almost all the operators, it seems, are not making money.

Fresh graduates too begin their careers with meagre salaries. While the ‘luckier’ ones earn RM2,000-3000, even this is insufficient in the larger cities. Parents then become the ‘unlucky’ ones, as the nest fails to empty.

If you don’t like higher tolls, then wake up earlier to use the trunk roads to avoid the congestion. And if you find yourself buckling under the rising costs of living, grow your own vegetables on your balcony.

Never mind that expensive, near-extinct turtle eggs are allegedly consumed or that lavish weddings involving the families of the top echelon of public servants leave us speechless. After all, these expenses are supposedly not from the public coffers.

For years, alarms bells have been blaring about the rising cost of living. But Malaysians, being a resilient and adaptable lot, somehow manage to adapt to all forms of hardship and adversity.

Throw into the ring expensive cars, sky-high property prices, lousy public transport, expensive food and other essentials and the GST. Yes, there will be grouses and complaints, but aren’t we enduring the floating petrol prices that stubbornly do not fluctuate?

No longer do we make a beeline for petrol stations if petrol prices increase by 10 sen at midnight. There is a reason why we continue chanting “Malaysia Boleh!” Malaysians will find a way to manage.

The prime minister has also introduced BR1M and 1Malaysia textiles, books and food stores for us to do our shopping and cope with the rising cost of living. But surely, you wouldn’t find leading brands of handbags and watches sold here.

Even the minimum wage has been increased by a whopping RM100 per month! And if this amount isn’t sufficient, Malaysians who are already debt laden are told to take up a second job with whatever spare time and energy they have left after their eight-hour full-time job and two-hour traffic crawl.

The notion of Malaysians being incapable of buying property, cars and other essential items and having to work two jobs to make ends meet reminds me of my grandmother and her struggles after the death of my grandfather in the 1960s.

I remember her telling me about rushing from one place to another to perform simple chores for meagre wages. I also recall accounts of her inability to spend on luxury items as money had to be spent on food while being heavily in debt.

In short, her life then was literally a case of “kais pagi makan pagi” although there was always ‘food on the table’. But there wasn’t really a table for her extended family of eight crammed in a rented room.

Working more than two jobs certainly meant no time for rest, for the family or for entertainment. With low salaries, everything was just so expensive, even a five-cent bowl of noodles was considered expensive. Her resilience, however, certainly paid off as her descendants now enjoy the fruit of her sacrifice by having better lives.

But how different are our lives today compared to yesteryear? Would Malaysians in 2016 live with more money in their pockets and bank accounts? And does the economy allow us comfortable and debt-free lives?

Being told to work more than two jobs to make ends meet – whether that statement was misquoted or taken out of context by the media – was certainly insulting and offensive. It speaks volumes about how out of touch some leaders are with the plight of the rakyat.

Instead of offering proper solutions, the rakyat were once again chided with the “if you don’t like it, then it’s your problem” phrase.

In fact, there are Malaysians already working more than two jobs but still finding it difficult to makes ends meet. Most Malaysians are not demanding salaries to embrace the jet-setting, holidaying, shopping and fine-dining lifestyle.

Moving into 2016, we are just a years away from 2020, the target year when we are supposed to claim to be an industrialised and advanced nation. In reality, homelessness and poverty remain vastly unresolved.

Many Malaysians only want a healthy economy that provides a quality lifestyle and affordable living costs. Instead, they remain deep in debt, incapable of making ends meet and possibly needing to work more than two jobs.

And as we scream the lyrics to the poem Auld Lang Syne without understanding its true meaning, let’s reflect on how we can make 2016 a better year economically, politically and socially. 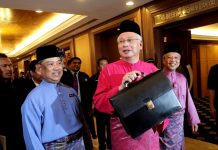 How Najib glossed over his economic performance