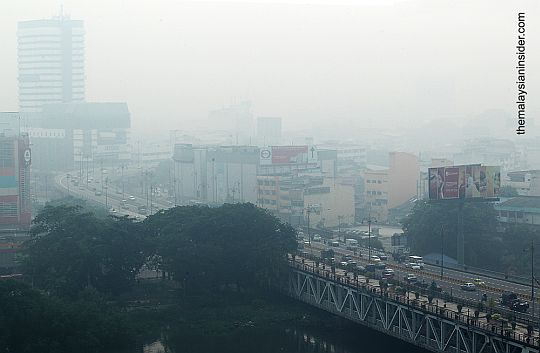 As the environment becomes choked with haze, the blame game begins. But instead of knee-jerk reactions, long-term efforts are needed, writes Adrian Lee.

It is said that Malaysia has two seasons: the dry season and the monsoon season. Malaysia, in fact, experiences four seasons, the third being the sales season and then the haze season.

Malaysia did experience a fifth season: the by-election season that came and went whilst disrupting the Malaysian political landscape.

Malaysia is now experiencing the haze season, sunshine is reduced and the skies have become grey. No, this isn’t autumn with its cool breezes we’re experiencing.

Haze isn’t mist or fog. Haze clogs the Malaysian skies with dust, smoke and other particles of contamination.

During the haze season, the Air Pollution Index makes its sensational comeback. API readings and predictions take precedence over the Bursa Malaysia. A bearish API reading is however favoured over a bullish one.

News reports are about whether the air is safe for breathing. School children develop a sudden and deep interest in the news awaiting the announcement of school closures when API levels breach the very unhealthy level.

Also reappearing is the blame game alongside the term “hotspots”. Satellites capture hotspots, which are locations of open burning taking place. The wind is also blamed for shifting course and moving the haze from Indonesia to Malaysia.

The Twin Towers disappear from sight; thick smog conceals the vista viewed from the summit of Penang Hill; and dust envelops the picturesque limestone caves and green hills along our highways.

While the loss of beautiful scenery is bad news for tourism, a fashion trend reappears: surgical masks are donned to filter out the haze and its fine particles.

Health and pharmaceutical experts however demystify the effectiveness of these masks. Introduced instead are the airtight N95 masks, which it is claimed can keep out 95 per cent of very fine unhealthy particles.

During this time of distress, fashionistas attempt to look chic with their stylish and multi-coloured masks. Some, however, unsuspectingly don masks that make Dr Hannibal Lecter’s appear like child’s play.

Governmental negotiations halted prematurely because the previous haze season had passed are now resumed. The Department of Environment (DOE) signs a Memorandum of Understanding (MOU) agreeing to stricter action to lower APIs and control or miraculously prevent haze from crossing borders.
It is agreed that the recurring haze problem that recurs annually like clockwork will not recur.

During the haze season, thunderstorms that trigger flash floods are strangely absent. To control the haze, governments then resort to the marvels of technology and divine intervention.

Cloud seeding with contentious results is carried out to induce rainfall. Should this fail; divine intervention is sought through mass prayers. A Malaysian minister once jested that a bomoh be engaged to generate rain.

The haze, which continually rears its ugly head, cannot be taken lightly and is no laughing matter as it causes severe health complications and revenue losses in tourism, entertainment and among eateries.

The fine particles of sulphur dioxide, nitrogen dioxide, ozone, carbon monoxide and PM10 found in haze are blamed as possibly causing coughing and headaches, and irritating the eyes, nose, and throat.

These fine particles may adversely cause long-term health and respiratory problems that could cause chronic obstructive pulmonary disease, asthma attacks and heart failure. Regretfully, haze has already been blamed for causing death.

The thick haze that blankets most of the country makes travelling a haphazard affair as visibility is reduced. The piloting of aircrafts becomes difficult and visibility at airports is significantly reduced. Driving is extremely risky as road visibility is worsened whilst motorcyclists are exposed to contaminated air.

Health warnings are issued advising people to stay indoors, to reduce smoking, to be properly hydrated, to turn on air purifiers and to avoid outdoor activities.

And as the environment becomes choked with haze, the blame game begins. But instead of knee-jerk reactions blaming Indonesia or Malaysian or Singaporean companies for the open burning, long-term efforts are needed.

Stricter measures need to be taken, as the Asean Agreement of Transboundary Haze Pollution treaty appears to be inept. While haze doesn’t recognise the sovereignty of borders, there is a need to sanction international legal obligations and cross-border prosecutions.

While farmers have been prosecuted for open burning, their employers have not been held entirely liable. Surely, the suggestion of naming and shaming the owners of such companies as measures to combat haze can be done. More effective measures also need to be developed to regulate the land-clearing process.

Proper awareness, education and enforcement efforts are also essential as haze affects the health and economy of Malaysians, Indonesians and Singaporeans.
Malaysians back home aren’t entirely faultless by openly burning rubbish. We burn fossil fuel by driving everywhere, even if the distance is just a two-minute walk.

Switching on electrical items to purify and cool the indoors won’t benefit the outdoors.

Rainforests and hills, which act as natural air purifiers recycling toxins, pollutants and contaminants, are destroyed to build more concrete jungles. To top it all, we build a rare-earth plant in our very own backyard.

So could corruption, greed, bureaucracy, negligence, mismanagement and apathy be the real factors contributing towards the unending haze problem?

If that is the case, better cross-border cooperation, education and enforcement is needed.

As I hope in vain that the haze would eventually go away, would never come back another day, Pink Floyd’s “Goodbye Blue Skies” plays in my mind.

Unfortunately, the Meteorological Department forecasts another few weeks of suffocating ash-tasting air, mask wearing and post-apocalyptic looking skies. Meanwhile, we brace for the coming monsoon and flood season, El Nino, La Nina, global warming and other weather and environmental calamities that humanity has unleashed as a result of greed.

http://www.straitstimes.com/asia/se-asia/jakarta-law-forbids-disclosing-info-on-plantation-concessions
All efforts until now dah koyak. Indonesia refuses to play. What now?