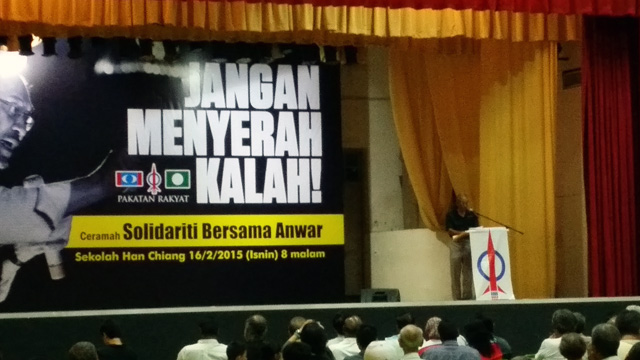 We must not only free Anwar; we must free the nation from the shackles of tyranny, asserts P Ramakrishnan.

If anything, all this will be remembered and kept alive. And someone will pay for it. There is no doubt about it!
Whether inside or outside the prison, Anwar will be a force to be reckoned with. Charismatic and effective leaders will not disappear from the consciousness of the nation or from the memory of grateful citizens.

They locked up Gandhi and Martin Luther King many times. But they could not stifle what they stood for; they could not prevent their ideas and struggle from perpetuating on their own steam.

So it will be with Anwar! No force or power can halt this determined struggle to bring about a change in government.

Why Anwar was targeted relentlessly?

It was GE12 in 2008 that put the fear of the people into the hearts of Umno and the BN. Never in their wildest dreams did they think that their two-thirds majority would ever be denied. Neither did anyone for that matter! That was their unchallenged political domain for more than half a century.

They got the fright of their lives. This man, this Anwar Ibrahim, would spell their doom and they would be forced to make way for Pakatan Rakyat to take over Putrajaya!

That was when the despicable plot was hatched.

According to available records, Saiful was met by a police personnel from the PM’s department. Two days later, on 24 June 2008, Najib’s ex-aide Khairil Anas accompanied Saiful to the Deputy Prime Minister’s residence in Taman Duta. They met for twenty minutes.

Shafee was there on that day and at that time. He claimed that he was in one corner of the house and did not participate in the discussion. Don’t you draw any conclusions; it was a sheer coincidence!

Then on 28 June 2008, Saiful made his police report that he was sodomised by Anwar on 26 June 2008. This incident was supposed to have taken place two days after meeting the DPM.

On 8 March 2013, the father of Saiful Bukhari Azlan publicly admitted that Datuk Seri Anwar Ibrahim’s second sodomy charge was an “evil political conspiracy” involving his son. This was mentioned at a press conference, as reported.

According to Azlan Mohd Lazim, “the conspiracy was planned by a special officer in the Prime Minister’s Department and was engineered to tarnish Anwar’s image with another sodomy charge…”

“Everything was planned in great detail by a special officer in the PM’s Department,” he alleged. “Even the script I read during the press conference after Anwar’s sodomy acquittal last year was prepared by this officer.”

Azlan apologised to Anwar and his family over the incident, admitting the episode had put them through much pain and suffering.

Azlan added that his sudden defence of Anwar, five years after Anwar was charged in court, comes after years of compiling information on the case, both during the sodomy trial and from details delivered to him from outside informers.

He said the truth was finally clear to him.

But strangely and inexplicably, on 1 May 2013, this very Azlan retracted his apology to Datuk Seri Anwar Ibrahim, saying his son Saiful Bukhari’s sodomy complaint against the opposition leader was not a plot.

“Today, I retract my apology to Datuk Seri Anwar Ibrahim and stress that my son’s sodomy case is true.”

“It isn’t a political conspiracy,” he told a press conference at a hotel.

However, he did not retract the role played by the special officer from the Prime Minister’s Department. There was no mention of that.

Coincidentally, police personnel from the Prime Minister’s Department were also involved in the murder of Altantuya. But I’m not saying anything to link these two cases in any way. It is just a coincidence, I suppose!

Anwar’s guilty verdict was world news. The reaction was one of disbelief.

The court’s decision was immediately criticised by the governments of the United States, the United Kingdom, Australia, Canada, New Zealand, Germany, and Switzerland, among others, as well as the European Union.

They all concluded that the verdict raised major questions about the independence of the Malaysian judiciary.

Inter-Parliamentary Union observer and Queen’s Counsel Mark Trowell, who was also an observer for Lawasia and the Australian Law Council, described the judgment as “superficial, failing to adequately deal with key issues brought up by the defence team”.

In the most damning statement of all, Trowell said, “If the court had proper regard to the facts and the law, Anwar Ibrahim should never have been convicted.”

Shafee had taken all of them to task and had said that they would eat humble pie when the full judgment was released.
Shafee lambasted the foreign dignitaries and correspondents for criticising the verdict. Shafee called on all these good people to read the full judgment to understand the verdict.

But Shafee should not believe that he is the only brainy one around and that the rest are unable to comprehend the judgment. Let’s not forget that diplomatic people, foreign dignitaries and correspondents had diligently followed the case and they are very familiar as to what transpired in the court. They had witnessed how Sri Ram effectively demolished and shredded the prosecution’s arguments until they had no leg to stand on.

In an unprecedented departure from the norm, in an unethical and unprofessional manner, the de facto Deputy Public Prosecutor, Muhammad Shafee Abdullah, accused the imprisoned Anwar of hiding behind a skirt.

He boasted, “I think he would have fainted in the witness box because he wouldn’t be able to explain a lot of things…”

When Anwar is behind bars and defenceless to rebut and reply, there is nothing heroic about Shafee’s gloating. Will he take on Anwar in a public debate and face him like a gentleman and argue his case?

In fact, I would, on your behalf and on behalf of all the Friends of Freedom and Justice in Malaysia, like to throw this challenge at Shafee: Would you dare take on Anwar in an open debate? Would you have the gumption to face Anwar and take him on? That would be a courageous thing to do unlike the vile attack directed at Anwar when he is not able to respond.

I ask again, “Would you dare?”

If you dare not, then you should stop making all these villainous and vicious attacks to vilify him. It does no credit to you; it does not enhance your reputation; it does not glorify you.

But, in all fairness, I must refer you to another debate on 15 July 2008 between Cabinet Minister Shabery Cheek and Anwar. Malaysians still remember the frothing Shabery Cheek at the debate!

There is one common factor between 1998 and now. When Anwar was first arrested and locked up in 1998, he was cowardly assaulted by the IGP, who almost beat him to death.

And now, soon after his imprisonment, Anwar is being assailed by another cowardly onslaught, this time verbally.
Both were intended to inflict maximum pain and damage to Anwar.

Friends, they have done everything to humiliate, disgrace and silence Anwar. But Anwar will not be forgotten. That much we owe to him and the nation.

Let the word go forth from here and now: we will not be cowed; we will not be bullied; we will not be intimidated!
There will be no escaping from the verdict of the people come GE14 for the Barisan Nasional. This unjust and unfair treatment of Anwar will be the undoing of the BN.

The BN should take notice. Imprisoning Anwar Ibrahim will not safeguard its fortune or future. The BN has brought upon itself its own destruction by hounding this man for almost 17 years. There is a price to pay for it. It will be paid!

The struggle for freedom comes with a price. The struggle for justice comes with sacrifice. This struggle will continue uninterrupted, unperturbed and unimpeded until a new dawn shines on Malaysia welcoming the establishment of a new government.

The above speech was delivered at a Solidarity with Anwar forum at the Han Chiang school hall in Penang on 16 February 2015.