The renaming of historical places has been a common phenomenon in many developing countries, particularly those that were under colonial rule.

Often some politicians attempt to gain maximum political mileage by arguing that the best way to remove the residual stains of colonisation would be by removing places named after colonialists. Sometimes the new names were those of well-known local personalities. At other times, places were renamed after undesirable characters. In some countries, roads have even been renamed after murderers, with the justification that they were ‘nationalists’. But would a true nationalist resort to murder?

Some countries like Sri Lanka (previously Ceylon) and Zimbabwe (previously Rhodesia) changed the names of their countries. Such changes to the names of places and cities may be justified to erase the painful parts of the country’s history.

Between the 1960s and 1990s, countries like India and Malaysia were examples of this post-colonial tendency. In many parts of Malaysia like Penang, street names were given a national flavour by substituting street for lebuh, lane for lorong, road for jalan, drive for persiaran, and – for the most part – leaving the personality they were originally named after unaltered. As a result, George Town names still has, among others, roads like Persiaran Gurney and Jalan Macalister, although other street names have been completely changed.

In contrast, Singapore appears to have bucked the trend, and the names of its old roads, streets and places have remained unchanged even after 55 years of independence. Many are still with British names, much like the widespread adoption of the English language as modern Singapore’s de facto lingua franca. Besides this, there are places with Chinese, Malay and Indian names, and this has fended off any likely allegation of official favouritism towards any particular ethnic group.

A number of places in the city state are named after its colonial ‘founder’, Stamford Raffles, and they include Raffles College, Raffles Design Institute, Raffles Hotel, Raffles Avenue and Raffles Terrace. There is even a statute of Raffles in North Bank at the spot where he was supposed to have ‘founded’ Singapore in 1819.

On a recent visit to Singapore, I took a keen interest in reading the names of some MRT stations. Names like Little India and Chinatown need no explanation.

As a Catholic, I was aware of the significance of the naming of another station, Novena, in 1985. Novena is a popular weekly devotional prayer session held at the nearby Catholic Church of St Alphonsus, more popularly known as the Novena Church. Novena is derived from the Latin word novem, which means nine, and refers to prayers offered for nine consecutive days. Catholics from all over Singapore and Malaysia converge on this church to attend the novena service, especially on Saturdays. It was heartening to note that the Catholics are recognised in Singapore, despite making up only 5.7% of the population or about 300,000 people.

Exiting the Little India MRT station, I was baffled to see a signboard pointing the way to Jalan Kerbau and Buffalo Road, both with the same meaning but in different languages. I found out that this area was where cattle and buffaloes were reared for slaughter.

Singapore is doing its part to combat climate change and global warming. As someone who is passionate about gardens, I noticed the city-state is flushed with greenery coupled with some aesthetic gardens bursting with a variety of plants.

For tourists visiting Singapore, public transport is the ideal way to move around. Tourist passes are relatively inexpensive, and they can be used on trains and smart buses. The punctuality of trains and buses is the hallmark of the well-connected transport system in the country. Trains and buses ply the main routes every few minutes.

I noticed a sign on a bus next to the driver referring to him or her as the bus captain – a respectful term for the difficult job of navigating the traffic in Singapore daily. All professions in any country should be bestowed similar due respect.

Diversity is always a source of strength for any country to capitalise on. Any country that cherishes and values its people of different ethnic backgrounds, talents, outlooks and capabilities accommodates and infuses novel ideas, standpoints and perceptions for the benefit of the country. Socially aware organisations in these countries encourage and harness such differences of opinions to formulate acceptable and pragmatic policies.

In a nutshell, the continual reinforcement of diversity enriches society. In any country, acceptance and respect for race, religion, culture and language goes a long way towards uplifting the socioeconomic conditions of the people. Conversely, myopic and narrow policies are often disastrous for a country’s prospects of advancement. 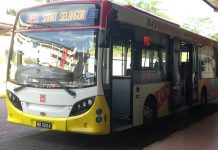 The chain of thoughts of the writer drifted into a dream-like mode when he wrote about Singapore. Totally off topic, haha…

I just wrote based on some of the observations I made during my recent visit to Singapore. Unlike you I was not dreaming!!! Think before you give your comments!!!