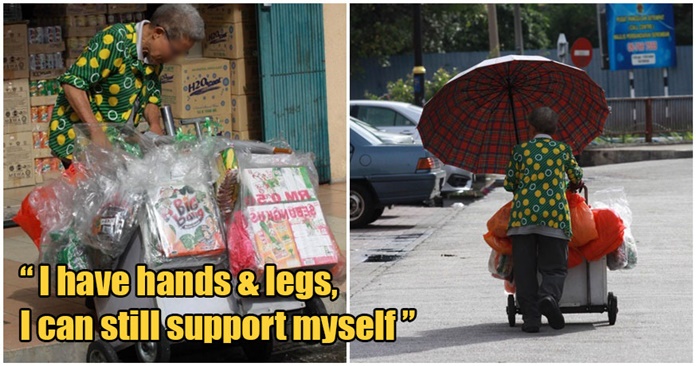 What a shame business schools did not teach once-high-flying business owners and top executives about the need to plan for a rainy day, Kassim SA writes.

The resilience of this elderly woman (photos above) puts to shame the leaders of business organisations and individual business who are now clamouring for taxpayer-funded aid from the government.

When their businesses made huge profits, they rewarded themselves with unimaginable salaries and bonuses, accompanied by lavish perks and benefits that allowed them to enjoy high living with their family members.

Each year, they came up with plans and targets that would continue to yield more and more profits for their businesses. They expanded their businesses by creating and reaching out to new markets. They ventured into new businesses that they thought could perform better or yield attractive returns. They did all this in the name of market expansion, business diversification and globalisation.

I can describe in one word what drove these businesses to keep growing: greed.

These businesses wanted to make more and more profits so they could continue to reward themselves well beyond their fair share.  And they wanted everything for themselves. And that is why we now have roughly 1% of the global population who control nearly half the world’s wealth.

We have been accustomed to believe that only the rich get richer while the poor get poorer. We see this in the material and financial wealth that the rich have acquired and have used to acquire even more.

The truth is they got rich in the first place because they knew how to make money. They had the knowledge to create wealth.

Those who were not driven by greed created wealth so they could give back to society, in terms of financial wealth and knowledge.

The rest continued to accumulate wealth – and unashamedly never failed to flaunt it.

To be fair, occasionally we heard of businesses donating small amounts here and there, but rarely was this done discreetly. The entire country had to be told, and it had to be seen through the presentation of huge mock cheques.

Then, we heard of a donation in the form of a house of worship that cost RM100m.

Meanwhile, the fishermen who live by the coastline continue to eke out a living by catching whatever fish that is left behind by trawlers and then selling it to village folk.

Here is an interesting question: What is perhaps the largest NGO in the world?

It is an obscure organisation named BRAC, founded in 1972 by Fazle Hasan Abed, a former oil company executive. Its mission is “to alleviate poverty and encourage economic participation by empowering people and communities in situations of poverty, illiteracy, disease, and social injustice through social and economic programs”.

The Economist (5 September 2019) describes this NGO as “the largest, fastest-growing non-governmental organization in the world–and one of the most businesslike”. Its annual operating budget is $500m (RM2.2bn). That is how it gives back to society.

Yes, we have struggling small and medium-sized enterprises who genuinely do need support during these difficult times.

But then we also have owners and executive officers of businesses who previously accumulated personal wealth but failed miserably to provide for a rainy day. They are now clamouring for support from the government – which can only come from taxpayers’ funds.

What an irony. And what a shame that the business schools and conferences and seminars did not teach these owners and top executives about real charity, genuine humanity and the need to plan for a rainy day.

Kassim SA, a long-time reader of Aliran, is a crusader of the truth based on facts

Profits are mine whereas losses are yours – Is this not the international culture?.
Some donated a few millions or a few hundreds of thousands RM of shareholders funds under CSR
but may expect larger amounts to ensure their own wealth security!!

Remembr past financial downturns where those who rescued with public funds their top brass continued to received high remuneration packages/bonuses in the developed countries with USA suspected of bseing among those leading?

RICH NEED TO BE BAILED TO ENSURE THEIR LUXURIOUS LIFESTYLES BEING MAINTAINED OF THOSE ON THE TOP AS MAY HAVE BECOME TOO BIG TO BE ALLOWED TO FAIL WHILE THE POOR ARE USED TO SUFFERING.
So 80% of the financial support goes to the top 20$ while 20% of the aid goes to the balanc

in 1988 i was working for (a shoe factory) which had a small factory in Kulim,it was there for nearly 10 years but it was a small business venture by (the firm).Than there shareholders sold it a local Company – a giant in Malaysia. The new director of the company … promised all the workers that their job are save. One month later the company retrenched about 100 workers some … earning RM130 per month.Than after 6 months they went to recruit some new workers.This is how big companies work….

Most people who run the companies, big or small, are driven by one factor only. And that is greed disguised as excessive profits

Give them loans, not handouts and money from the people’s savings! They can afford to pay back later.

This was precisely what was proposed to be done in Malaysia during the financial crisis of 1998. Companies were asked to take a hair cut, but the powers that be then did not agree as businesses run by their cronies would be badly affected.