Let us embrace and capitalise on new technology instead of blindlyfalling for obsolete yet expensive solutions, writes Simon Tan.

For the past 10 years, I have hated using Rapid Penang buses.

My daily commute, door-to-door from Taman Free School to Gurney Tower, is a mere 20 minutes’ drive compared with 100 minutes on a Rapid Penang bus.

On top of that, I have had to endure the humid hot weather and negotiate dangerous walkways only to reach a poorly ventilated bus stop. (If you are lucky you may not need to change buses at Komtar or Bukit Jambul.)

Ask thousands of Penang drivers what they think of commuting by bus, and I bet you will hear similar grumbles.

Thirty years ago, Kuala Lumpur had a few choices. Today, it is stuck with its elevated light rail system.

Today, in Penang, SRS Consortium is proposing a 30-year-old solution at an outrageous RM8bn for a single 30km elevated light rail route.

Today, as well, we are at a crossroads of several innovations. Five years ago, we did not have Grab. Uber’s next game plan is to use robotaxis (driverless electric vehicles).

How much will these technologies cost? With economies of scale from nationwide implementation, it is estimated that for RM1bn, we can acquire 5,000 robotaxis at RM200,000 each.

Key in your destination into the robotaxi app, and the nearest shared robotaxi heading to your hub will pick you from your door at 50 sen per km.

Rapid Penang existing buses can then focus to serve arterial routes between the following hubs: Tanjung Tokong Tesco in the north-east of Penang Island, Komtar/ferry terminal in George Town, the state mosque in central Penang Island, Bukit Jambul in the south and Balik Pulau in the south-west.

The bus service could be at a 10-minute frequency, with fares at 30 sen per km as interpolated from the Rapid Penang fare chart.

Upon your arrival at your designated bus stop, your robotaxi will be waiting to take you to your destination.

This combination of robotaxis with Rapid Penang buses has the potential to convert a substantial number of private car users to public transport, hence reducing road congestion and travel times.

How to embrace and integrate these innovations?

The Land Transport Authority of Singapore and a private firm are about to start trials of full-sized driverless electric buses at a university campus in the island republic.

The idea is that these self-driving buses will help to solve their search for bus drivers for a fleet of more than 6,000 buses.

Arizona has been testing Google’s Waymo robotaxis since 2017. Another car manufacturer is planning to launch a self-driving autonomous car in 2020.

Penang, the Silicon Island of the East, and Malaysian universities have the people skills and knowledge for systems integration and development of these innovations.

Malaysia desperately needs to improve its public transport system and optimise the billions that were spent on obsolete and low-coverage elevated light rail and mass rapid transit systems in Kuala Lumpur.

How fast can we implement these robotaxis? With political will, we can fully implement robotaxis within five years, less than the seven years to construct elevated light rail transit infrastructure, which is fast becoming – if not already – obsolete.

Before investing RM8bn in an elevated light rail system, we need to ask ourselves: don’t we need this mobility data?

Fortunately, the robotaxi-bus combination is adaptable to changing travel patterns to help Penang achieve the national goal of a 40% public transport modal share.

As a nation, this project will provide sustainable mobility at a more affordable price (RM1bn versus RM8bn for a single elevated light rail route from Komtar to Penang airport).

The success of this project will leapfrog Penang’s mobility ahead of other medium-sized cities. We can then sell our systems to these cities.

Robotaxis and 5G are coming whether we like it or not. Let us embrace and capitalise on them instead of following blindly (without travel pattern data) and ‘developing’ an obsolete yet expensive solution.

Simon Tan, who recently attended an Aliran’s writers’ workshop with the theme Writing for Change in New Malaysia, hopes that an expert group can further develop this combo idea, as suggested by his sifu. 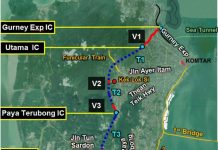 An alternative vision for transport in Malaysia

If the state government approaches Toyota with this scheme, it can persuade Toyota to consider invest an assembly line for Toyota iRoad in Penang. By doing so, it can also get a cheaper electric vehicle, Toyota iRoad compare to Mitsubishi i-MiEV . The capital investment will then decrease tremendously.

Electric vehicles is still new in the market. Without the support of the government, it is difficult for manufacturer to launch a mass production.

If we use Mitsubishi i-MiEV as example ,which cost RM136,118 in Malaysia, for electric vehicles sharing scheme.

If we break it into 5 phase, the capital cost for each phase is about RM 0.8 billion with O&M cost of RM 100 million per annual.

Wake up to reality.
https://hbr.org/2019/01/the-cost-of-self-driving-cars-will-be-the-biggest-barrier-to-their-adoption

Current rapid bus is not effective and efficient because it still rely on hub and spoke .
Read my article Hub and spoke don’t work any more
https://m.malaysiakini.com/letters/150852

School boy’s assumption without common sense. In Klang Valley alone you need 50,000 taxis to service the on demand transportation.
For the whole nation you need about 120,000 taxis.

As for 5G coverage, you can’t provide 5G coverage to every inch of the nation. If you dare to deploy robotaxis without full 5G coverage, i would dare to order a trip to place where there is no 5G coverage. I will set a sand trap forvthe robotaxis . I guarantee you that in no time i will hijack all your robotaxis with ease.

Dumb and stupid Malaysians stop your unrealistic dream and stupidity before it is too late.