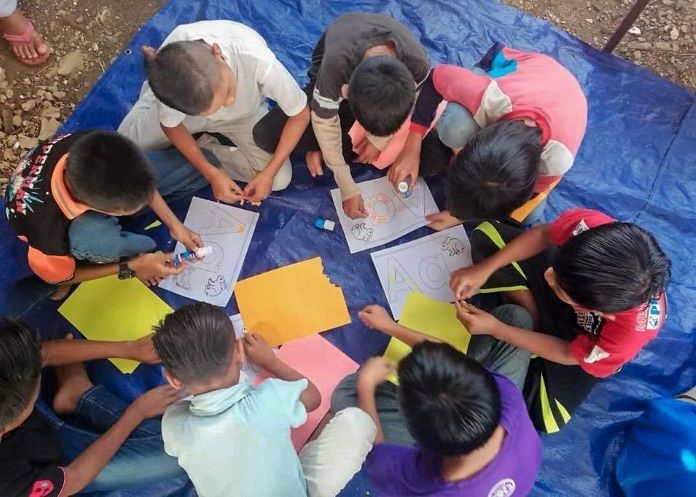 This is a brief interview with Borneo Komrad spokesperson Shakila to get to know the organisation and the issues it aims to tackle.

Could you tell us about Borneo Komrad’s history?

Shakila: Borneo Komrad was formed in 2016 when two clubs from Universiti Malaysia Sabah (namely, Kelab Sastera Mahasiswa and Suara Mahasiswa UMS) merged to form a new organisation. The initial objective was to empower students to become future leaders and to democratise university life.

Later, we became concerned with issues of rural poverty, such as village children sleeping on the streets, and we started advocating for policy changes.

In 2018, Borneo Komrad started its educational project Sekolah Alternatif, first in Semporna, then in Tawau and Kota Kinabalu. Until now, there is no formal membership and all activities are collective in nature: anyone can join, from regular Sabahans to experts and scientists.

So, what is Sekolah Alternatif?

Sekolah Alternatif aims at eradicating illiteracy among undocumented children. To pursue this objective, we focus on the three Ms: reading (membaca), writing (menulis), and calculations (mengira). With these, we want to teach children basic literacy, a vital asset that can help them improve their socioeconomic situation.

Besides the three Ms, we also teach children to develop skills such as farming, tailoring, art, cooking and artisanry. All these skills can add value to a child’s life: suppose he (or she) moves into town in search of work, cooking skills can help him become a chef instead of, say, simply washing dishes, a lower-salary job.

Why are these children undocumented? What community do they belong to?

Most of the children are of Bajau and Sulu descent. There are many reasons why they are undocumented.

First, it is possible parents did not register the child’s birth as they are poor and could not afford to go to the hospital.

Second, the parents might be unaware of the importance of registering their kids: they themselves might have lived their life as undocumented persons, and don’t think registering the child will make a difference.

Third, undocumented parents might be afraid of being caught by the police.

A fourth reason is the burdensome bureaucracy, which takes both time and money. Poor families just cannot afford to interrupt their work to focus on bureaucratic matters and travel to Kota Kinabalu, let alone Putrajaya. Historically, moreover, when … Sabah [along with Sarawak and Malaya merged to become a] federation, news of the latest developments in politics and nationhood might not have reached the most remote communities – as such, they remained excluded from citizenship.

Finally, Sekolah Alternatif also takes place in a refugee camp mainly inhabited by migrants from the Philippines. When the refugees arrive, there is no registration process. Some of them settle, marry with locals and their children are not registered.

Because of all these reasons, there are many families in Sabah to whom basic rights such as education and healthcare are not guaranteed.

Are people from other states aware of this situation?

On the whole I am not sure, but in 2018 we did a tour of the peninsula, met university students, and gave talks about children’s right to education in Malaysia.

READ MORE:  Upholding the right to education for stateless children

At that time, many participants admitted they had no idea about the issue of undocumented people. Most think of Sabah as a beautiful tourist destination, without any knowledge of its deep-rooted problems.

Although occasionally people like Ebit Lew take the initiative to go to Sabah and carry out projects, these initiatives are riddled with problems: in the case of Ebit Lew, who promised to build schools in Semporna, they overlooked that Semporna already has schools, and that such projects need to empower locals in the long term, rather than just delivering quick fixes.

How did the pandemic affect your work?

The pandemic’s major impact was on our movement and growth: education means gathering with the children, play, travelling for activities, all of which were interrupted by the MCO [movement control order].

The good news, however, is that we were able to finalise our modules, including our new module on pendidikan improvisasi (improvised education) that we use as a guideline to teach children in a non-static way. For example, teaching farming will include considerations of language (the medium used to teach the subject), mathematics (calculations involved in agriculture), science (relating to plants) and so on.

Besides this, throughout the lockdown, we have not been able to meet the communities to involve them in the teaching process; we are also not able to survey door-to-door which families need aid.

Finally, an activity which had to stop was our training of children tour guides: local kids were being trained to bring tourists to hike and camp on hills, sail to islands [while] talking about their land,

Is there no policy to help these kids? What does the government do?

READ MORE:  Living together in pursuit of Malaysia

Honestly, until now, I don’t think any serious and holistic solution was ever taken for undocumented children. In late 2018, the government had announced that Sabahan children could enrol in schools despite not having documents.

However, this proclamation completely ignored the local reality: so many facilities are not able to accommodate enough students; some children are too poor to afford school uniforms and materials; etc. Till now, no concrete and  impactful policy was ever introduced by the Ministry of Education.

Is there animosity towards the children’s communities?

There is. Various slurs exist to refer to certain communities, such as “Pati” [the acronym for Pendatang Asing Tanpa Izin or undocumented foreign migrants], “pendatang” [a label for immigrants], “pilak” (a Bajau term for a ‘low-caste’ person).

Sometimes these feelings are fuelled by local politicians, who promise that the said communities will not be given documents.

However, we must persevere in educating people about this issue, about the policy loopholes and the right to education.

Finally, what’s your message to the non-Sabahans out there?

My message is: look at Borneo! Be aware of how many people in Sabah live in poverty and severe deprivation. I have seen many villages and rural areas in Malaysia, but never people as poor as in Sabah.

Daniele Speziale, from the small Italian town of Savona, studied at Penanti Secondary School in Bukit Mertajam as a 17-year-old exchange student and later as a political science research intern at USM – and he has been passionate about Malaysia ever since. A political science graduate from Leiden University in the Netherlands, he is now embarking on a masters in development studies in the UK