JD Lovrenciear shares his thoughts on the political turmoil that has gripped the nation.

As the country continues to watch and talk about the uncertain future, one observation that requires deeper thinking is about the type of politicians the nation has spawned and nurtured.

Our politicians fall in two categories: the elitist politicians and the other, the working-class, community politicians.

Although the latter are bound to win votes from the people in their constituencies, the elitist politicians have amassed great power and control, thanks to vested business interests and the nature of political system has evolved over the past 30 years.

Today, in the wake of the political dilemma threatening our future and striking deep at the economy, we witness more clearly these two classes of politicians in our political landscape.

At all costs, the elitist politicians will not allow themselves to be marginalised, ostracised, punished and left in the cold.

Meanwhile, the community politicians increasingly find it a daunting task to break through the well-protected elitist circle and remain increasingly frustrated that they are made to look helpless in the eyes of their constituents.

And as the elitist group lobby and make loud calls that they alone can protect the ordinary people, it is likely they have access to funds they can use to sway the crowds.

Unfortunately, voters probably will remain at the losing end – and their grassroots, community politicians will increasingly be edged out by the agendas in motion.

Will the elitist politicians, who have all the trappings of wealth, easily surrender their power and control and let the Rakyat build a new Malaysia for all Malaysians through their preferred community politicians who have none of these trappings of comfort and power?

The outcome appears like a forgone conclusion as we witness the entourage of powerful individuals making their way to the palace.

Whether leaders of Umno and Pas will admit or otherwise, the fact is their arrogance has reared its ugly head all over again.

They are calling for a dissolution of Parliament to pave the way for snap elections.

It looks like they learned nothing from the 2018 general election. Humility never blossomed within their ranks over the past 20 months.

The people made a verdict. They chose Pakatan Harapan over and above Umno and Pas and made it possible to smash the 62-year-old yoke on them.

And in this crisis, Umno and Pas have the audacity to disregard the outcome of the people’s decision in the 2018 general election and haughtily call for a snap general election.

Before they do that, perhaps the party leaders should come clean from the court cases and Malaysian Anti-Corruption Commission investigations first.

Those who are consorting with these leaders better ask themselves a question based on conscience: Is what Umno and Pas putting on the table is justifiable – morally and ethically, based on religious precepts and community traditions?

Umno and Pas have unashamedly stated they are only willing to accept a unity government on condition the DAP is excluded.

Remember, many abandoned Umno and Pas in droves in the last general election and gave their vote to PH, and this led to the DAP bagging the second highest number of votes among all the parties contesting.

Even amidst this national crisis, Umno and Pas have shown that they have not understood the sentiment of the people to this day.

The DAP is not an enemy of the state. They are a legitimate political entity that has been an integral part of the democratic journey of our beloved nation.

Dr Mahathir Mohamad, the task in your hands is something no leader would wish for. It is difficult, painful and most taxing.

Concerned citizens are divided in their perceptions of this national crisis. But they, unlike certain political forces, are innocent of any wrongdoing.

Someone, some diabolical politicians, must have hatched this whole scheme and, in the process, hurt our beloved Malaysia with a wound so deep it will leave a permanent scar in history.

The people are also divided in their perception of you. You are seen as villain or saviour.

I pray that, as the interim prime minister tasked with the most daunting task of resuscitating the nation, you will eventually help to rescue this nation from the plague of corruption and deceit.

You now have to oversee the re-shaping, resurrecting and functioning of a government – of the people, by the people and for the people. Only then will the ‘villain’ label on you be erased.

Malaysia does not belong to anyone. It belongs to the Creator, and this nation is merely a gift to all of us, to serve a good purpose.

Like us the ordinary people, you too are a servant in the vineyard. May your labour quickly bear fruit. 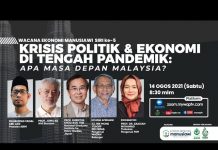 PAS and UMNO has started a conversation. About? If UMNO is still under the control of Najib, as it seems possible, then a Faustian bargain between UMNO and PAS will give national power to PAS, for the first time, in return for dropping all charges against Najib. The puppeteers are at play.