Khong Kah Yeong wonders if the old demoralising SSB salary scheme could have contributed to the decline in the education system.

I refer to Adrian Lee’s article “Remember, we voted for a better education system“.

If I have read and understood it correctly, his main observation is that our education system has deteriorated to the extent that teachers are no longer educating their charges to be individuals with wholesome characters but merely coaching them to pass examinations.

From what little experience I have, an event does not normally happen in isolation. It happens nearly always as a result of a series of seemingly insignificant events or factors acting either together or as a result of a chain reaction. Thus the situation of our education system as it is now could have been the result of a combination of factors contributing to make it what it is today.

A number of writers have commented on this topic. Their commentaries touched on the need to revamp the syllabus for each subject taught in schools and to learn from other countries the method of teaching, the marking of examinations answer scripts and more. But in all their commentaries so far, none touched on a silent factor: the salary scheme for teachers and heads of schools.

The SSB or New Remuneration Scheme was introduced in 1992 during Dr Mahathir Mohamad’s first term as Prime Minister. It was a more complex form – a matrix with several segments, each of which had a number of layers or lines of scale to cater for the various categories of teachers. Each line of the scale allowed a relatively simple progression for a short period of time before reaching its end. Then a teacher would have to be strongly recommended to be promoted to the next higher level.

When it was introduced, its selling point was that, because it had so many more segments, it offered teachers more opportunities to be promoted to the next higher level sooner. The laggards would theoretically be self-motivated to work harder and improve their performance to be recommended for promotion. The scheme also offered teachers who produced consistently outstanding results in their subjects the chance to become “expert” or “master” teachers with attendant promotions and allowances.

But when the scheme was implemented, school heads in their submission of the annual assessment of their staff could only recommend a very limited number of teachers for promotion each year. In fact, only 5% of the 960,000 civil servants qualified for “melintang” (horizontal) or “menegak” (vertical) increments each year. This resulted in a large number of hardworking (but not outstanding) teachers being held back to await their turn the next time around.

Even then, I was told, there would be no guarantee that they would be duly recommended and promoted. The result: never before in the history of the education service had so many been punished so much for the sins of so few!

READ MORE:  Schools should be a safe place for children

All ideals about character- building and nurturing whatever other worthy qualities of a pupil’s character were secondary.

Those teaching the weaker classes, which had students who could not even write their names properly and had no hope of achieving excellent results, would try to get their head’s recommendation in other ways. Hence, the common nicknames then for the salary scheme: Sayang Sayang Boss and Saya Suka Bodek!

Those teachers who had been passed over for promotion year in and year out would either be demoralised, resigned to their fate, or stop putting in their full effort and instead just mark time.

Some of these teachers turned to moonlighting as sales agents for insurance or household goods and cosmetics. A few even became part-time tour guides. Many took up tutoring after school hours to earn back the money they deemed they had lost because they had not been promoted.

Not surprisingly, a good many of these teachers found their part-time income more lucrative than expected and elected to spend time on their now no-longer-part-time work.

Had the period of the SSB, which ended in 2002, then contributed in no small measure to the state of our education system to the level it is today? Is there any lesson to be learnt from it? 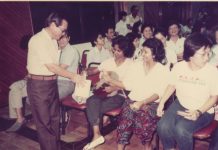