The loud cries of a baby pierced the night as the pouring rain drew to an end. Water trickled down from the roof of the shed to the dusty, cold cement floor of the shed. In the darkness, with no light, Aisha, 14, and her siblings huddled together to create some warmth in their rickety home on the outskirts of George Town – the only dwelling place their parents could afford.

It was then that Aisha decided to take charge of their destiny. She would do anything to give her family a better life – a home without rats squeaking in the middle of the night, with no sudden downpour that could flood their house. While still at school, she found a job and eventually succeeded in giving her family a better life.

At 18 or even younger, many teenagers like Aisha work to fend for themselves, slogging to support their families. They have the ability and maturity to make decisions that will affect their future.

The 18-year-olds especially are more than capable of thinking for themselves, and they should be accorded the right to vote. Many of them know which political party has their interests at heart and which party will work towards the future they aspire to.

To build a better country, certain reforms must be carried out.

First, the education system needs to be revamped to produce knowledgeable future leaders. Schools don’t teach students what they need to know about world history – how this world was built, the alliances formed, the mistakes made. Even though there is world history in the syllabus, it is vague and superficial and doesn’t give young minds a holistic view of key historical developments.

READ MORE:  Right to education is for every child

Malaysian teenagers too should be granted the right to vote. After all, the minimum age requirement for entry into the Malaysian armed forces is 18.

True, not everyone reaches maturity uniformly. There will be some youths who do not understand the gravity of the current situation nor appreciate the impact of their vote.

It would be a learning process for us all. Letting the youth vote would give them the exposure they need to the current political situation. It would also instil a sense of responsibility and patriotism in them. They might not make the best choice at first, but they would learn from their mistakes.

The world is evolving, and youths generally adapt better to social media. With this in mind, social media could be used as a tool to raise awareness among the youth of the challenges Malaysia faces as a developing country.

This would educate the younger generation – in a way school doesn’t – on what is happening around the world and within our country. Hopefully, this would get them more involved in the formation of a better future for them.

The changes the younger generation, with their creativity and open minds, can bring are endless. Open-minded youths would equipped and more prepared to accept communities from various backgrounds and to cherish equality for all – especially if they have not fully imbibed acquired prejudices.

Many adults fail to see the potential the youth have. These “knowing adults” deprive the youth and are not prepared to give them an opportunity to voice out their opinions. Instead, the youth are treated as “kids” who are not old enough to even vote.

What most people don’t realise is that these “kids” are sometimes the ones who support their families. Their financial contributions supplement the meagre incomes of the adults who are living from pay cheque to pay cheque.

Many working youths deal with the same daily problems adults grapple with. Unfortunately, these youths are treated like children and aren’t given the opportunity to vote. This is clearly unfair.

I hope the voting age is lowered to give youths like Aisha the chance to make a difference and to help Malaysia flourish as a developing country.

Surekha, 18, is about to start her law studies at a local university. She is currently an intern with Aliran

Muda will destroy its future if it aligns with Mahathir 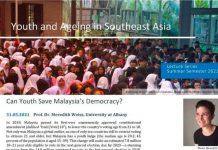 I totally agree. The old have to let go and allow the young to act, to take initiatives even if they make mistakes, the right to vote. Of often the old have forgotten how they were when they were young. They have been brought up to listen to the old and They repeat this pattern when they are old. They think that They have the advantage of expérience so that the Young must learn from them. This lncludes what you should belief in. They want leave behind a Legacy.

Young people like Surekha and her contemporaries will need to be bolder than their forefathers. It is not only about fighting for their votes but about influencing others how to think to solve problems without fear, how to change what is broken and about taking the lead.

Yes, old enough to work, old enough to vote!
Fact of the matter, many at 18 in Malaysia have been working for a few years already.
So, why is this pengkhianat nasional government pushing back UNDI 18 at least to next year?

The politicians are afraid of the younger ones. They are the wild cards. The unpredictable ones who have been really educated, not by schools or teachers but by social media and public opinion.