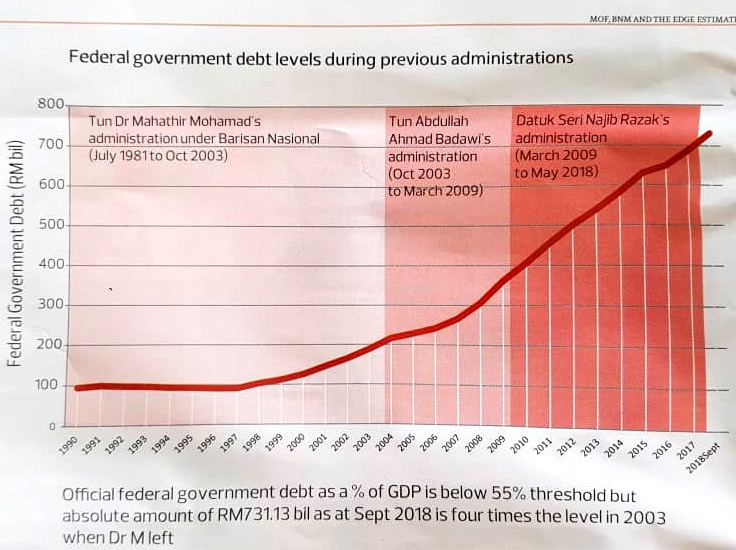 Malaysians should not forget so easily the mountain of debt left behind by the Najib administration, writes Anil Netto.

Of late, former Prime Minister Najib Razak has been trying hard to re-invent himself – singing on social media, riding pillion on a superbike, being seen eating out in public places – especially in the run-up to the Cameron Highlands by-election on 26 January 2019.

But Malaysians should not forget the legacy of his administration so easily. Take a look at these latest figures:

Below is somewhat different breakdown, which doesn’t include other liabilities:

Perhaps not all the government guarantees should be considered as debt, as some of the guarantees may be on debt which is recoverable.

But either way, we are still talking close to RM1 trillion in debt, almost three quarters of GDP.

What this means is the federal government’s debt service charge or interest payable amounts to a whopping RM33bn per year (compared to about RM5bn for cash handouts in 2019 under Bantuan Sara Hidup).

That comes up to 13% of government income which has to be used to service this massive debt. This is at a time when the government’s operating expenditure alone comes up to 99% of its income, leaving hardly anything left over for development expenditure.

No wonder we will have a tough time wiping out those persistent fiscal deficits, let alone reducing that mountain of debt.

This is the real disastrous legacy of the Najib administration, which has set the nation back a decade. Malaysians should not forget.

The period 1990 to 1997 was when the Malaysian economy was quite literally booming, people felt rich, jobs were aplenty, entertainment nightspots were thriving, live musicians were having a whale of a time, expatriates from the west were coming here in droves for opportunities, businesses were growing without effort. a feel-good factor was inthe air and it looked like the party would never end, until the Asian Economic Crisis hit in July 1997 and it was downhill all the way since then, as memories of those go go days in Malaysia fade into history.

From what I can see, federal government debt was flat at around RM100 billion from 1990 till 1997, after which it began rising from around the time of the 1997 Asian Economic Crisis and has been going up steadily since then, during the last years of Mahathir’s first perioud as PM, throughout the time of Abdullah Badawi and throughout the time of Najib.

Therefore, it’s unfair to pin the blame on Najib alone for not doing anything about this rising debt. Why didn’t Badawi do anything, why didn’t Mahathir do anything? Could they do anything?

I’d really like to know a breakdown of what this all this debt is due to and how the present government aims to check and reverse it.