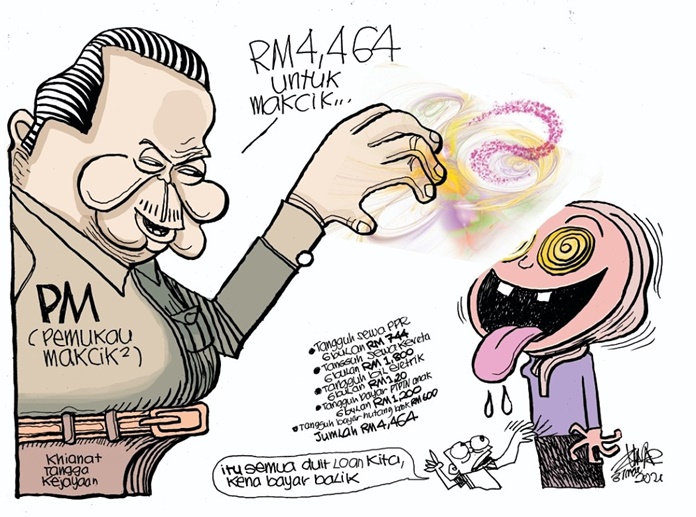 People like Makcik Kiah should not be duped into believing that there is a windfall for them in the PM’s stimulus package, writes P Ramakrishnan.

Let me at the outset confess that I am neither an economist nor accountant. I am just a simple, ordinary citizen who relies much on his common sense in his commentaries.

In his televised stimulus package speech, Muhyiddin tried to convince us that the hypothetical “Makcik Kiah” would have savings of RM4,464 at the end of six months beginning from April. She is made to feel she is getting a windfall from the government? But is it a fact?

This is how Muhyiddin has worked out this windfall:

When the above five items are added up, we get a total of RM4,464, including the second and fourth items totalling RM3,000. This, according to Muhyiddin, is a saving.

In reality, this is expenditure stretched over the next six months. This is money that may have to be spent. This expenditure has not been waived, only “suspended” and may be subject to “resumption” until “clarified clearly”.

“Suspended” repayments are deferred payments, not written off and subject to being resumed until “clarified clearly”.

After six months, Makcik Kiah will have to resume payments for at least two of these items. By this arrangement, if need be, she will eventually settle all her loans six months later from the original schedule of payments in the loan agreement.

If it was a saving, as claimed by the PM, that money must be in Makcik Kiah’s hands. But Makcik doesn’t have this money. If she had this money, why would she delay her payment in honouring her commitments? It doesn’t make sense, does it?

Let me emphasise, this is definitely not a saving; it is only a deferred payment – not written off – and subject to being resumed until clarified clearly.

If it was a saving, the money that is not used to make payments will go into her pocket, but in this case it does not because there is no cash with her.

If you don’t pay your rental, car mortgage, business loan instalments, etc – whatever you don’t pay now – it is because money is not available to you for spending. So payment is postponed, but eventually you have to start meeting your commitments.

Put another way, if you are able to pay your dues, it is expenditure. When you are unable to meet your loan commitments, you fall into debt. Where is the so-called saving, Muhyiddin?

People like Makcik Kiah should not be duped into believing that there is a windfall for them in this stimulus package announced by the PM. Simply put, it is a hoax!

The next point is, as Anwar Ibrahim rightly raised, “What happens when the borrowed money runs out?” What is the next course of action to save our economy from ruin?

For this, it is not sufficient and neither wise to confine this debate among the 70 ministers and deputy ministers. It concerns not only them but the entire nation. We need wider participation, discussions and debate to find a solution that will provide results.

So what do we do?

Lim Kit Siang has proposed a two-day emergency session of Parliament to tackle this serious problem confronting us. The input from the 222 elected members of Parliament who represent the entire nation will be very useful and indeed may help improve and enhance our approach in jointly tackling the problem more effectively.

If the PM is uneasy about convening a parliamentary session because of a possible motion of no confidence, Kit Siang has allayed that fear by suggesting that only the stimulus package and possibly Covid-19 would be the topics of discussion with no other items on the agenda.

This being the case, there is no reason to baulk at this suggestion for a parliamentary session at this crucial moment. We hope – and expect – that the PM will heed this call and respond within the next couple of weeks.

Failing which, it will be obvious that the PM chooses to play politics at the expense of the nation!

It is said: Don’t play victim to circumstances you created.

dont show your lack of knowledge. you embarass me. this is purely political motivated. only idiots avoid taking the moratorium. nothing harm. consult your financial expert you moron

You are truly an idiot, the loan payment is not accumulated the way you calculated them. The loan will only RESUME payment after the 6 months period has ended meaning that if she is currently paying RM600 for car, she will resume paying RM600 for that car after 6 months has ended, except for interest accrued within these 6 months. But most banks excempted the accrual of interest despite the fact that bank negara allows for interest to accrue.