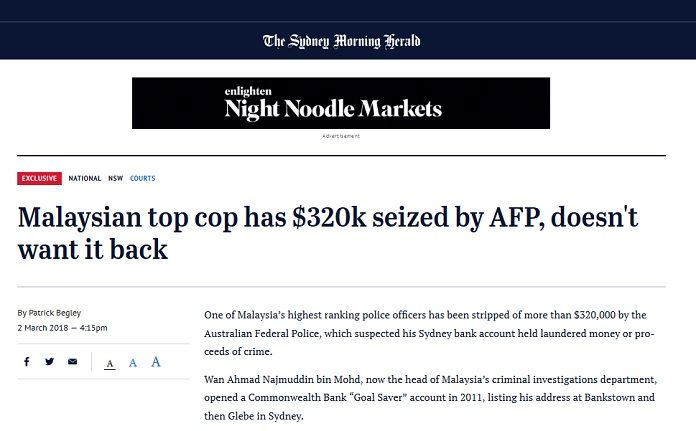 Surely steps must be taken to return the frozen money in Australia to the Datuk Seri, to clear his name, and to uphold the good reputation of the Malaysian police, says Rom Nain.

The recent Sydney Morning Herald revelation regarding the current director of the Criminal Investigation Department of the Royal Malaysian Police Force and the official response have been puzzling and of some concern to many Malaysians.

The Australian news report, which has since been taken up by Malaysian news portals, states that the good Datuk Seri has had his Australian bank account frozen and more than A$320,000 (RM970,000) in it seized by the Australian police.

The Datuk Seri, in turn, has stated that he will not fight for the return of this money, since it would be too costly to take the Australian authorities to court over this matter.

In other words, he is forfeiting almost RM1m seized from his account which, it has been reported, was for funding his two children’s education in Australia.

And we are told by the Malaysian police that the bulk of the money (RM700,000) was from the sale of his property in Shah Alam. That leaves a further estimated RM300,000 of the seized money unaccounted for.

Be that as it may, the primary concerns are threefold.

First, in this digitalised 21st Century, with instant trans-border banking facilities, why was it not possible either for his children to open their own bank accounts in Australia and for the money to be wired directly to their accounts, or, if the money was for settling tuition fees, for the funds to be wired from Malaysia directly to the finance department(s) of the university/universities concerned? Many other parents have done so for decades and continue doing so. It is actually quite simple and straightforward. Even large amounts of more than RM50,000 can be transferred, with Bank Negara approval.

Which brings us to our second query. Why go through the process of getting a close friend to transfer the money to Australia – which resulted in unknown persons making deposits at different ATMs and bank branches in numerous Australian states? And why was each deposit below the monitored threshold of A$10,000?

Third, having sold his house for RM700,000 to finance his children’s education, why is he now willing to contribute that sum – and more – to the Australian authorities by not fighting for the return of his money? Yes, as the good Datuk Seri says, it is costly to take the case to court. But surely it is a case worth fighting for, for money hard-earned mainly from the sale of his property in Malaysia?

If, as has been reported, an internal police inquiry here in Malaysia has cleared the good Datuk Seri of any wrongdoing, such as money laundering, surely the findings of the inquiry can and should be used to support a case for the return of the money?

Surely steps must be taken in order, first, to return the money to the Datuk Seri; second, to clear the Datuk Seri’s name; third, to uphold the good reputation of the Royal Malaysian Police; and, finally, to enable Malaysia and Malaysians to once again hold their heads high in the international arena at a time when misdeeds and misadventures by those in high office have brought shame to this country and more than scarred our image and reputation.

The crucial question is why go through the process of getting a close friend to transfer the money to Australia – which resulted in unknown persons making deposits at different ATMs and bank branches in numerous Australian states? And why was each deposit below the monitored threshold of A$10,000? This would be the act of someone who knows the banking law in Australia, and who tires to circumvent the law. This is not the work of someone “naive” about the law as being portrayed.