The Association for Community and Dialogue is concerned about the ethnic undertones that emerged after the Pakatan Harapan’s decision to introduce khat calligraphy in schools.

It shows the new Malaysia carries the baggage of ethnic silos that seem to fear things without inquiry.

Apparently, some non-Muslims genuinely feared that the introduction could be a subtle attempt at Islamisation, which if not opposed early on could later become a compulsion.

For some Muslims, this was another attempt by non-Muslims to challenge Islam as the official religion, revealing an attitude of Islamophobia.

For ethno-religious politicians, it was a bonanza which could be used to rip apart the PH government, which is walking a tightrope over Malay support.

How should Malaysians have responded to this situation when the government blundered in the way it handled the policy while extremist voices grew louder?

Malaysians need to respond to issues through reason and moderation that demonstrate empathy. The response should take on an exploratory and transformative attitude rather than being trapped in ethnic silos that tend to view issues merely from a particular ethnic point of view. Malaysians need to explore the nation’s multi-ethnic and multi-religious cultural heritage without fearing a loss of identity.

In my experience as a writer and researcher, I am always fascinated by culture and its symbols that are different from mine. I like to derive intellectual and moral synthesis from the great writings of scholars and sages, irrespective of ethnicity and religion, that can help me bring people together.

Understanding the history of the Malay Archipelago, which I am part of, would enrich my knowledge and make me a well-informed Christian living in the midst of a Muslim-majority nation. It would help me to be prepared for cultural encounters.

For example, lately, I read a book on the Iranian influence of Indonesian Islam through Sufism centuries ago that brought about the inclusive interaction of Islam with other religions in Indonesia.

Through the book, I understood that Islam is not an exclusive religion as practised in Malaysia. I derived knowledge and the value of empathy towards communities that are part of the Malay Archipelago, which includes Malaysia.

It is only with the culture of encounter that one is able to relate with “the other” in dialogue. This entails not merely thinking about my own Christian cultural heritage but how this culture can be linked to other cultures and create bonds of solidarity between all ethnic and religious groups. In this context, I would see calligraphy as something valuable rather than a threat.

Therefore, it is vital that our learning should not merely be about facts, ideas and figures. Our education content should teach our young and old how to link their respective cultural heritage with other cultures.

While acknowledging what is distinctive about our cultures, we should at the same time pursue what is similar. This requires the ability to link our own understanding of reality with ‘the other’ without being ideological and simplistic. 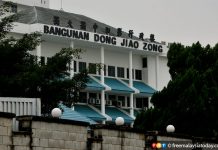 Dong Zong and racism: How much does Mahathir understand?

Everyone is talking about the deterioration of our educational system including the minister of education. This is the most fundamental problem that has to be solved. Does the introduction of khat solves this problem. The obvious answer is no. Why then the education ministry gets embroiled with insignificant matters? Give priority and focus on the fundamental problem.