Ling Liong Sik’s recent arrest has inspired Martin Jalleh to pen this ster-ling ode to the weird goings-on in Bolehland.

The impact of corruption is crippling
The brain drain numbers are appalling.

Many ordinary people are struggling
The elite, nation’s wealth are gobbling.

Umno’s “internal security” is crumbling
Confidence of its members is wobbling.

Other BN partners are loudly grumbling
Against Umno’s bullying ways so galling.

For 15 months the PM has been babbling
Slogan after slogan he has been dangling.

The country needs something very startling
To kick-start PM’s image so troubling.

So they call the AG to get the circus rolling
Put in the dock a very big fish called Ling.

First Tun ever charged in court, of star billing
No handcuffs, but it must be very humbling.

From the government he (allegedly) has been stealing
In a case where they have been long stalling.

Ling is commanding and confidently smiling
Some people, even in Umno, will be trembling!

He needs only to begin with a bit of “spilling”
And some big guns will be slipping and falling.

More will be arrested to give a serious feeling
Ling could even recommend some for grilling.

The AG’s case seems so strange and puzzling
Will there be brokering, wheeling and dealing?

MACC in big cases has so far been bungling
Will they succeed in making this revealing?

Pre-election circus has got officials scrambling
PM’s image must be made to look real sparkling!

Past big fish arrested in charades most telling
All were acquitted, came out of court giggling.

The citizens of Bolehland are riotously chuckling
Such a circus and charade is no longer appealing!

Will we be spared more deceit and swindling?
In the next general elections, God-willing! 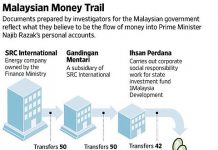 Are you serious in suing, Mr PM?