Water does not belong to any state, political party or a particular politician to tag a price to it, P Ramakrishnan writes.

It is flabbergasting that this crazy thing could happen, but the Pas Kedah menteri besar is demanding RM50m from the Penang state government for drawing water from Sungai Muda. This does not make sense, simply because it is a demand without rhyme or reason.

It is common knowledge that Sungai Muda flows from Kedah and meanders its way through Penang state on its way to the sea. This is the natural course for the river before it empties itself into the Straits of Malacca.

The way the MB is fighting for the RM50m for the river water gives the impression that the water in Sungai Muda is generated by Pas and released into the river. If Pas had miraculously produced the water before releasing it into Sungai Muda, a cost would have incurred in the production of the water, in which case Kedah is entitled to receive payment for the water. But is this the case? It is not Kedah’s water, and he has no right to demand payment.

Is the MB that dumb not to realise that the source of the water is not from Kedah but from the mountains along the Malaysia-Thai border? It is from these mountains that the water gushes down tributaries that feed into the river on the Malaysian side and travels through Kedah and Penang before it reaches the Straits of Malacca.

It has been suggested that some of the water in Sungai Muda could have its origins at a hill range along the Malaysia-Thai border, where the water appears to gush down into tributaries that feed into Sungai Muda in Kedah before flowing through Kedah and Penang and eventually into the Straits of Malacca.

Going by the MB’s silly reasoning, can Thailand lay claim to some of the water that passes through Kedah? But Thailand won’t. It knows it has no hand in the water that feeds the river.

By his convoluted logic, the MB should voluntarily consider paying Thailand for using any water that originates from the hill range along the Malaysia-Thai border. With all respect, will he be that puerile and fatuous?

The MB doesn’t seem to have the capacity to understand the nature of things in the Universe and is unable to appreciate that water is a gift from God – and it comes free! It is the nature of things that we are blessed with rain that provides for our needs: to quench our thirst, to irrigate our farms and fields, to clean our plates and cutlery, to bathe, to provide for our household needs.

Water does not belong to any state, political party or a particular politician to tag a price to it. It is only the foolish who will try to do this absurd thing and expose themselves as lacking in common sense.

It is rather strange that Pas, the Islamic party, has kept quiet on this controversial issue without pointing out that the MB’s claim is seriously and severely flawed, and that the more he insists on this payment, the sillier he appears to be.

What has Hadi Awang, the Pas president, to say on this controversy? Will his views reflect some common sense? It will only be known when Hadi opens his mouth! It appears he will not dare to take the risk!

If Pas wants to be parochial, then it will be stuck forever in the medieval times of ignorance and forfeit its right to be sensible and rationale!

What will the MB come up with next? Will he collect toll from Penangites crossing into Kedah? If this happens, there will be no end to this absurdity!

For Pas may come and Pas may go

But Sungai Muda will go on forever!

The Kedah MB’s conduct reminds us of the saying, “Common sense is the most limited of all natural resources.” Will it ever dawn upon him that in the words of the author Amit Kalantri, “a river doesn’t just carry water, it carries life.”

We Malaysians must continue to aim for the lofty and celebrate life, not denigrate it! 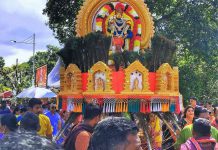 A deficit of common sense is a common trait amongst Malaysian politicians.
Legally speaking, that part of the river which flows through Penang territory is Penang’s.
Sometimes I need to take a break from Malaysian politics which endlessly revolves around race, religiion, 1MDB, Altantuya, cronyism, nepotism, kleptocracy and so forth, round and round and round like a broken record.
I sometimes just clear my WhatsApp messages in some chat groups I’m in or sometimes I just leave the group altogether.
Thanks to COVID-19, I’ve been spared having to endure similarly puerile coffee shop political talk in 24-hour eateries.
Whilst all this is going on under the Malaysian coconut shell, the world beyond moves on.

That MB must have applied a twisted logic from part of the Johor/Singapore water agreement without fully understanding that agreement. If he’s not careful Thailand will start to ask Kedah pay for the water in that river, too! Will this then mean a throw back to the days when Kedah had to send Bunga Mas to the King of Thailand?

Aw…w, Rama , what a lovely rebuke for the Kedah MB.
Let’s hope some sense creeps in to his hollow skull!