Are these isolated criminal acts or are they the tip of a phenomenon permeating the entire nation, wonders JD Lovrenciear.

When even a care home is ransacked during a tragic fire, what can you say about the Malaysian social fabric and the level of crime in the country.

During the fire that gutted several shops in George Town, Penang recently, volunteers evacuated about 70 care home residents who were mostly in wheelchairs or bedridden. Upon returning to their centre after the fire, they were shocked to find the place ransacked and some of their belongings missing.

Should we dismiss this as yet another isolated incident? Or is this the tip of a phenomenon permeating the entire nation ranging from house break-ins to snatch thefts to armed robberies? And let’s not forget the large number of traffic offenders.

Not only that, some steal electricity; others steal water; still others pollute our waterways. Some give and take bribes to the extent that segments of the nation’s logistics services are affected if they don’t go along.

We have multi-billion ringgit cases being tried in our courts, and we had probably the world’s worst kleptocracy.

Despite all the admonishments and crackdowns to make people more pious, despite the mushrooming of places of worship, despite our unending battles over what constitutes religiously acceptable food and attire, crime is taking its toll on this small nation of only 32 million people.

Are there no politicians willing to take the bull by the horn knowing full well that our social development is being eroded just like our education system?

Or is staying in power and making money the only end game that matters? Shall we then put on our blinkers and say that all this crime is “biasalah” (the norm). 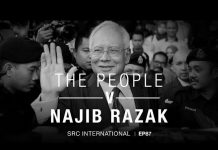