Thus far, neither the Malaysian nor Indonesian governments have done anything effective to restore some degree of sanity to the debate over their differences, notes Farish Noor.

It would appear as if Reason and Rationality have gone on holiday in Southeast Asia recently: in Malaysia, a group of angry residents who wished to protest against the construction of a Hindu temple in their neighborhood decided to demonstrate their anger by marching to the government offices in Selangor with a severed cow’s head, a gesture that was guaranteed to offend the sensibility of pious Hindus who regard the cow as a sacred animal. In Indonesia, a misunderstanding over a tourism ad commissioned from a non-Malaysian company has angered scores of Indonesians, simply because it mistakenly featured a scene from a Balinese pendet dance which the Indonesians regard as being exclusively theirs: the net result being a new round of anti-Malaysian protests leading to local vigilante groups harrassing tourists in Jakarta and going out into the streets to ‘sweep’ the country of Malaysians.

In both Malaysia and Indonesia, tempers seem to be rising out of control and for all the wrong reasons. Making matters worse is the fact that in both countries these mob actions are neither accidental nor unavoidable. Mobs do not form themselves and move into the streets for no reason; vigilante groups do not miraculously form themselves out of this air without funding and political support.

And so we need to ask the question: how and why – in the year 2009, more than half a century after the independence of both countries – is the state of politics and society in both Malaysia and Indonesia still rooted in primordial essentialisms and sentiments that are based on intuition and emotionalism, rather than reason?

To be sure, mob actions such as what we have seen in Malaysia and Indonesia today are not new to Southeast Asia. We often forget that Southeast Asia has historically been one of the most violent parts of the world and that, since the 1950s, there have been a succession of orchestrated and engineered campaigns of mob violence. In Indonesia, the anti-Communist campaign of the mid-1960s led to the slaughter of hundreds of thousands, and the campaign against Malaysia (then Malaya) known as the Konfrontasi was likewise a bloody affair. Malaysia too has experienced campaigns of demonisation and violence, including the sustained campaign to demonise the so-called ‘communist threat’ in the 1960s to the racial violence of May 1969.

In all these cases we can see that mob violence and public anger are never accidental or arbitrary. There were, and are, clearly defined and identifiable actors and agents involved, including politicians, political parties, NGOs, lobby groups and the media. Also, in many of these cases, we see the unhealthy and dangerous collusion between right-wing ethno-nationalist forces and the instruments of the state, leading to a marriage of convenience made in hell which results in pogroms, mass killings and victimisation on a horrific scale.

What was missing in all these instances was Reason and rational debate: ethnic and religious conflicts can only be resolved when communities respectfully engage with each other; and in instances where there can be no resolution, then take the rational path of accepting that they simply have to learn to live with differences. Likewise, misunderstandings over issues like cultural appropriation and misappropriation can only be resolved when we take a rational approach to culture and history, and to reasonably accept that all cultures are composite complex entities that cannot be monopolised and copyrighted by any community. For Indonesians to claim batik as being exclusively Indonesian, for instance, is both historically and logically wrong – for batik was produced all over Southeast Asia and up to China, India, Africa and even Europe. To claim that one country has the right to patent something as universal as batik is as absurd as to claim that the United States of America has the right to patent all cars since they were the first to mass-produce them!

But reason and rational discourse can only be re-injected back into the current Malaysian-Indonesian debate if we allow it to. This entails some degree of responsibility on the part of Malaysian and Indonesian politicians, who are morally and politically obliged to restore order in their own societies. The Malaysian authorities should never have allowed the protesters against the Hindu temple to march with a cow’s head in the first place; and the Malaysian authorities likewise have an obligation to ensure that Indonesian workers – like all foreign workers – are protected while working in Malaysia.

The Indonesian government, likewise, has an obligation to stop the spread and escalation of the anti-Malaysian demonstrations, which seem to be led by mainly right-wing hoodlums and thugs who hide behind the mask of patriotism and nationalism, but who in reality are no different from the preman gangs that have terrorised the Indonesian public for decades.

Reason and rational debate only work in softer climes where the voices of reason can be heard. Thus far, neither the Malaysian nor Indonesian governments have done anything effective to restore some degree of sanity to the debate. Standing idly by and passively allowing things to get out of hand means that both governments are negatively responsible for what might follow. And if this latest round of Malaysian-Indonesian misunderstanding escalates further to hysteria and violence, both governments will have to be held into account, like fire fighters who stood by and did nothing while the building before them was burnt down to ashes.

We are Water: Chap Go Meh by the river 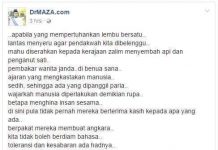 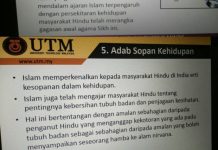