Aliran celebrated its 41st anniversary with a fundraising dinner on 8 September 2018 in Penang in a simple yet majestic way. JD Lovrenciear reports.

Held at the Majestic Theatre in Penang, the multiracial event attended by some 400 Aliran members and supporters, along with special guests Datin Paduka Marina Mahathir and world famous Malaysian cartoonist Zunar, was an occasion to remember.

Despite over four decades of struggle and regime change, Aliran clearly has a lot more work to do. Aliran president Dr Prema Devaraj provided a run-down of the group’s continuing role in Malaysian society in the effort to build a more just Malaysia.

In her address, Marina, referring to Aliran’s membership of close to 200 members, said it is not the numbers that count. Rather, it is the commitment, determination and perseverance to make Malaysia a better and more inclusive place for all that can make a difference. She cited her own experience with Sisters in Islam, which has a few dozen committed members, as another example of the sort of influence a small group can have.

She thought it a bit strange that Aliran should choose to celebrate such an odd anniversary – the 41st. “Maybe you all were too depressed to celebrate [your 40th] last year [under the old regime]!” she quipped.

On stage, Zunar sketched a cartoon depicting how Malaysians came together to chop off the sick BN tree on 9 May 2018. But the caricature also showed how far down the deep-rooted politics of race and religion, which had characterised BN’s rule, had sunk. We need to be wary of these toxic roots for they can easily sprout again in the future.

The artwork was later auctioned off to the highest bidder for a whopping RM8,000, which Zunar generously donated to Aliran.

What was most inspiring was the culture of fellowship and solidarity shared and lived out by the team at Aliran as they rolled out the dinner programme, a highlight of which was the soft launch of the thought-provoking book Regime Change in Malaysia: GE14 and the End of UMNO-BN’s 60-Year Rule consisting of some 40 chapters by 30-odd contributors.

[The 112 copies of the book put up for sale at the dinner were quickly sold out. Those who would still like a copy may contact the Aliran office in Penang 04-658 5251 from 13 September or the Gerakbudaya store in Petaling Jaya. You may also order the book online from Gerakbudaya. The book launch proper will be held in Gerakbudaya PJ on 22 September.]

A gig by Azmyl Yunor on harmonica, Adil J on sax and J Sara on guitar, especially the catchy song Kebebasan, added a poignant if philosophical note to the evening.

This was followed by a collection of song parodies by the Aliran Singers, reflecting the aspirations and musings of a team of truly patriotic citizens who have put the nation above self.

Some of the feedback after the dinner:

Brilliant performance by the Aliran Singers 👏👏👏 I love the choice of songs! And awesome lyrics. Congrats!

Almost professional. You guys should go on tour.

It was a lovely evening, very entertaining, lovely speeches, and the singing. Thank you.

We enjoyed all the songs. Aliran sure has a pool of talented people.. All the yrs… my husband is a strong supporter of Aliran… After tonight..I can stand firm and say he supports (a) talented organisation.

May the future path that was pioneered and journeyed by the present and earlier generation of Aliran members and supporters serve to inspire a new generation of Malaysians who will help transform the country with a government that serves the rakyat rather than itself.

Aliran’s struggle itself has been recognised through its listing on the roster of the Economic and Social Council of the United Nations. Indeed, Aliran is here to stay. It is only right that Malaysians step forward to support such an organisation that puts nation-building for all Malaysians above any vested media agenda. 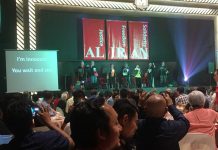 Marina: Struggle for human rights goes on in new Malaysia

Despite regime change, Aliran’s struggle for a just Malaysia continues 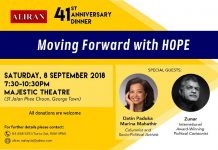