People are already sneering at this package.

It took a rising number of suicide cases, bankruptcies, job losses and pay cuts before the government could come up with its latest social relief scheme.

The government is even allowing the people to draw down their retirement savings in the Employees Provident Fund for a second time – something that many abhor, and rightly so.

Veteran politicians like Tengku Razaleigh Hamzah have openly stated that the PN government has failed to handle the present crisis.

It is also on everyone’s lips that the PN government’s response (or rebuttal) to the Yang di-Pertuan Agong’s statement to reconvene Parliament “as soon as possible” is tantamount to disrespecting the powers of the constitutional monarchy.

Already some people are begging for their daily food. The growing number of volunteer food banks and soup kitchens is evidence of widespread, nationwide hardship.

Social media has gory, painful videos capturing people dying by suicide even if mainstream media shy away from reporting these for political or other reasons.

Will any of the 70-odd cabinet ministers have the courage to tell us how many business operators have lost their school buses, tourist vans and buses on hire purchase because of the ill-conceived knee-jerk responses to our plight over the past year?

Why do we have to keep begging before they announce any help even though their offers leave even first-year economic undergrads shaking their heads in disbelief?

The people are so fed up at having to beg to have their constitutional rights and parliamentary democracy restored.

Social media has been going hyper since the announcement of the second phase of the relief package, with calls for street protests from moving and parked vehicles to flying a white flag.

Why must people be driven to beg for a living? Why must they beg for economic and financial salvation?

And worst, why must the people have to beg for the restoration of Parliament? Is even the Agong’s call to reconvene Parliament in the best interest of the people not good enough for the backdoor PN government?

The period when people were willing to give the benefit of the doubt to Mahiaddin Yasin and his buddies is over. He failed miserably to come off as a new, shining star – through no fault of the people.

The people’s hope that Parliament would be quickly restored fizzled out when the PN government turned the issue into an academic debate with zero commitment for a speedy resolution.

History will never forgive nor forget all those who, through commission and omission, allowed so many Malaysians to beg for their rights in these cruel times of a global health pandemic.

I woke up today, promising to stay positive, hopeful and keep smiling, but like many others, I felt unable.

The all-too-familiar trademark smile on many people’s faces has gone. But then how can we keep smiling and faking ‘positive thoughts’ when people are suffering all around us in increasing numbers?

READ MORE:  What's next for the recovery plan?

When we are confronted with viral videos of people taking their lives, how can we keep smiling and preaching hope?

When increasing numbers of homeless people are crowding narrow alleys and shuttered shopfronts, what smile can we share?

When some in cities and towns are scraping for food daily to feed restless children at home, how can we still pretend to smile?

When hardworking businesses people can no longer earn a living, what hope can our smiles bring?

When bankruptcies are mounting kiri kanan (left and right), we would be mad to still smile.

The smiles on people’s faces have vanished, thanks to the deeds of the cabinet ministers and political appointees recruited to seemingly “save Malaysia” (as promised by Mahiaddin Yasin alias Muhyiddin Yassin).

How can we not be affected when so many are reeling in untold misery all around us, with others not knowing who will be the next victim of a failed government?

And so, the once all-too-familiar ‘Malaysian smile’ has gone, with so many around us under great duress.

The greatest sin against the people is to continue pretending that we are not plunging into greater uncertainties as the days roll by. 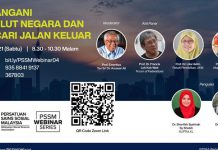 Phua Kai Lit, your wish for a welfare state should not be equated with the welfare state of the West that arose after World War II. There is a big roll-back of that in the 1980s – the Thatcher years – in the West, not just in Britain.

Having said that, the call for a welfare state is never over the top since it was our good ole Bapa Malaysia, Tunku Abdul Rahman, who spoke about pursuing an egalitarian state when we achieved Independence in August 1957, not the present shameful chase for wealth for the sake of wealth.

We as a nation must first admit that we have taken the wrong path before we can make a conscious collective decision to go back to Square One.

Sack the PM and all the ministers! I have not seen any one of these ministers going to the ground level to help people in dire straits. Where are they? All talk, always the same. We can write and appeal but do they read what is written or said? Are they stupid or illiterate?
It is time for all the people to raise up and demand for our rights since these jokers don’t care…
Our government and elected representatives have failed us. Taken us for a ride while they enrich themselves. We should not allow them to get away from persecution!

9. Voting is made compulsory and easier

11. The Constitution of Malaysia is revised

12. Steps are made toward a “proportional representation” electoral system

13. A Women’s Charter is introduced

3. Bumiputera privileges are extended to the poor (B40) of all ethnic groups

4. Bumiputera privileges are extended to all middle class Malaysians as the next stage

5. Bumiputera privileges are removed for upper class people, in stages

6. PH government explicitly declares that its goal is to build a Welfare State for all Malaysians

7. Overseas Malaysian and ex-Malaysians are welcomed to come home and work, or at the very least, invest in productive sectors of the economy

8. A programme to tackle climate change and its negative effects such as SLR (sea level rise) is introduced

I fully agree with what JD wrote. More and more are becoming destitute. Bustling towns turning into ghost towns. God save Malaysia !!

ABOUT US
Aliran is a reform movement in Malaysia promoting justice, freedom and solidarity.
Contact us: aliran.malaysia@yahoo.com
FOLLOW US
Content may be reproduced without alteration but please attribute to aliran.com
wpDiscuz
6
0
Would love your thoughts, please comment.x
()
x
| Reply