Even before the coronavirus pandemic, many airlines around the world were so weighed down their survival was in doubt.

Despite airlines having grown more reliable over the years with cheaper air fares – especially for low-cost carriers – and greater efficiency, the industry remained bogged down with problems.

Airlines faced hindrances ranging from the cyclical nature of the global economy, fuel price fluctuations, higher operational costs, the impact of emissions on climate change, and political interference. Many airlines would have braced themselves to overcome these hurdles.

But they could not have imagined a virulent pandemic throttling air travel the way it has. The hammer blow from lockdowns has grounded most of the world’s airlines, with mainly essential air services left running to bring home stranded nationals from overseas. Some airlines have sent food and medical supplies to countries in need.

The pandemic has hurt both conventional airlines and low-cost carriers – not only their staff but also many other related businesses relying on air travel. Think of the manufacturing, logistics, marketing, distribution and catering firms, the travel agencies and hotels. Business at these places nosedived, as airlines cancelled flights and grounded their planes.

Many airlines laid off their staff. Others resorted to staff pay cuts depending on the position of the staff. Like in other sectors, staff face enormous uncertainty – especially painful for those with families and those who are breadwinners.

Administrators at state-owned South African Airways are looking at a “structured wind-down” instead of liquidation.

Some airlines like Norwegian Air, Air France-KLM and Lufthansa were fortunate enough to receive substantial lifelines from their respective governments. The Norwegian case is interesting: one of the conditions for government aid is for the airline to convert its debt to equity. So several leasing companies that rent aircraft to Norwegian are converting their outstanding leases to equity, throwing up unexpected new part-owners of the airline, including China.

Uncertainty in Malaysia too

At home, Malaysia Airlines and low-cost carriers Air Asia and Malindo are struggling. Hopefully, they will be able to survive this scourge and resume normal operations quickly. All three airlines have embarked on cost-cutting measures to deal with the slump.

The industry’s best brains should now come forward to put forward proposals for the future of these airlines. Now should be the time for reflection to strategise the best way forward.

Malaysia Airlines should rationalise its operations and operate solely as a commercial entity with no political meddling. If politics is intertwined with business, then it will inevitably spell ruin for the airline again, and it will be back to square one.

Remember, Malaysia Airlines was once a profitable airline, noted for its excellent inflight service. I vividly remember the golden service extended to passengers in the 1980s and early 1990s. Some accomplished staff helmed the airlines back then. It should not be impossible to restore past glory.

So many Malaysians, including me, have benefited immensely from the affordable air fares of both our low-cost carriers. It will be a sad day for the Malaysian aviation industry if these low-cost carriers reduce their presence in the local and international air travel landscape. If that happens, it would hit the tourism, hospitality and other related sectors.

Although two airlines in a neighbouring country merged their operations, the same should not happen in Malaysia. Any merger will create a monopoly in the local aviation sector, especially in domestic air travel. If there is a merger between AirAsia and Malaysia Airlines, it would lead to higher air fares over the long term because of a lack of competition. The result: ordinary Malaysian air travellers would be the losers.

Airlines now face an uncertain future. All airlines have experienced a slump in demand for air travel. Similarly, the global economy has shrunk, affecting the lives and livelihoods of millions of people around the world. When things will get back to normal for the airlines is anyone’s guess, as many countries are still battling the coronavirus pandemic.

Many airline companies are now cash-strapped, their liquid reserves fast dwindling. If this trend continues, many of these firms will slide into bankruptcy before long. National governments and the airline industry must act immediately to avert a global airlines calamity.

All that glitters in pawnshops is not gold 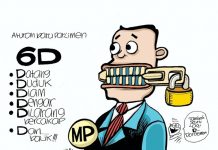 Easing of partial lockdown could come at a price

I don’t see how it is relevant that a great company in the 80s should deserve to thrive, let alone survive 40 years later. What does staff in 1980 have to do with air travel in 2020? We don’t allow 70 year olds to drive a car and now you want to put them in charge of a fleet of airplanes??!!

This dinosaur approach to business is quite illogical given the speed of technology obsolescence and changing consumer preferences. Put a young person in charge – less baggage, less corruption, less fixation on the glory years of the 1980s. Or better yet, [dismantle] the whole company … and start from scratch.