Jeyakumar Devaraj describes how the residents of one kampong in Perlis are finding their voice and forging the bonds of solidarity in trying to save their homes.

Kampung Seri Kesinai, which has about 250 resident families, is situated 4km west of Padang Besar, just south of the border with Thailand.

The residents built houses on what was then state land in the 1970s and 1980s. On the several occasions when they asked the government for grants (title deeds) for the land they were on, they were told to not worry as it was government land and they could stay put on it, but not sell it to others. The government, in turn, provided roads, water and electricity, often in the build-up to general elections.

In early 2018 15 residents in this kampong were jolted by a letter from a lawyer that deemed them illegal settlers and asked them to vacate the land within a week. It was then that the villagers discovered that their kampong land had been divided into four-acre lots and either sold or given to non-resident individuals whom they did not know. Lot 598, where the 15 residents lived, had been given in 1992 to a certain Wan Hussin who, going by his identity card number, is now 89 years old.

The Lot 598 residents were in a quandary. They approached their local elected representatives and were advised to find a lawyer to represent them. They tried, but lawyers were quoting a fee that was too high – RM20,000.

Finally, the local state assembly member (from the MCA) managed to get them a lawyer who was prepared to help them for a fee of RM5,000. But the lawyer advised them to be prepared to move as Wan Hussin held the grant to the land and, under Malaysian law, his claim to the land would be difficult to contest.

It was at this point, in early December 2018, that a few of the residents came to Penang to look for PSM together with youth members of Pakatan Harapan parties. They met up with R Kartiges and asked for help.

The Penang PSM team felt that we should take up the matter. The first meeting with the Kampung Seri Kesinai residents was on 17 December at their kampong. We all sat on the floor of their community hall to discuss their situation.

It must have been a bit of a cultural shock to them. Because up till that point all politicians, both Barisan Nasional and Pakatan Harapan, had been telling them there was no way to fight the eviction – and that they should be happy that the “landowner” wasn’t asking for back rent or for the quit rent for the previous 26 years, etc and that they should prepare to move out.

The PSM team took a different tack and asked:

The Seri Kesinai residents found our line of reasoning different but “correct”- for their underlying feeling had always been that they were unfairly unfairly deprived of housing. But they had not got any authority to support their gut reaction to the situation.

For the first time they were hearing people telling them that they had rights and that they should stand up for these. A buzz of discussion and laughter filled the room. One lady in her sixties with bad knee arthritis declared that she was prepared to sit in front of the bulldozer. The residents decided to push for a better deal.

Talking to the lawyer

Our discussion revealed that their lawyer was working towards a consent agreement that would give the people six months to move out. That was the best that she felt she could do given the grant was in the plaintiff’s name.

We explained to the residents that, if they entered into the consent agreement and registered it in court, they would have to keep to the terms of that agreement and move out in six months. And if they didn’t, the “landowner” could get the court to issue an order to evict them with the help of the authorities.

We accompanied the people to meet their lawyer. She was friendly. (I was relieved – I had feared that she would see our intervention as troublesome interference.)

We explained that the residents had decided to bring their case to the attention of the authorities, and that we needed time to do this. In the meantime, we asked her not to go for the consent agreement.

The lawyer agreed but cautioned that we might be hit with higher costs at the end.

We then went to the Kangar Land Office and procured copies of documents for the adjacent lots.

A pattern emerged. The land in the kampong had been divided into rectangular-shaped four-acre lots and registered under individuals from other parts of Perlis. All these transfers were done in 1990- 1992. More than 60 such lots had been given out. More than 500 families were affected!

Was this a scam? We are still not sure. We have asked the youth from the Pakatan Harapan parties to do some asking around.

We found that two of the neighbouring lots had caveats lodged on them by development companies.

Stepping up the campaign

We went back to the kampong on 27 January for our third meeting with the people. This time, we brought along a memorandum to the Perlis menteri besar for the people to sign. Around 60 people attended the meeting with more than half of them being from the neighbouring lots. We had anticipated this and had brought along a similar memorandum that the residents of the other lots could take back and collect signatures.

We handed in the memorandum signed by the 15 families of Lot 598 on 28 January. About 20 villagers turned up to hand over the memorandum to the menteri besar’s political secretary and explained to him their situation.

He promised to call them back.

The villagers later fielded questions from the journalists whom our friends from the Pakatan Harapan parties had invited.

Around six Special Branch officers were present to observe and take photographs. They seemed to know who we were.

The residents who came were delighted.

We told them that this was just the beginning and gave them some work to do: setting up a residents’ committee and opening a bank account under the name of three residents.

We also asked them to see their local MP (from Umno) and state assembly member, pass them a copy of the memorandum that was handed to the menteri besar, and seek their support.

We promised that we would come up again for another meeting in about three weeks. We will walk with the Kampoing Seri Kesinai people until their problem is settled. With a bit of luck, they might be able to win back their land or be given alternative housing.

But there are probably many other kampong people all over the country who are continually being marginalised by the way our society is being run. Shouldn’t we all be doing more for them? 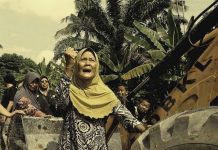 Are we proud of the way we react to issues of race and religion?