Such traits are the hallmark of the major faiths, and religious leaders must display those characteristic to promote unity, writes Dominic Damian.

This is an unwritten belief or unsubstantiated science, yet I will tender it. We are all born as clean slates: pure, innocent, vulnerable and defenceless. We know not our ethnicity, creed or names. We have no inkling of knowledge, colour or possessions.

We respond to anyone or everyone. We are protected by all and hated by none. Our conscience, our soul and spirit were perhaps written and planted with divine simplicity. Perhaps a divine entity planted a flute with a tune of destiny and music of pure love in an empty soul.

We were perhaps richest when we were poorest, had nothing and knew nothing.

The most basic freedom of conscious choice our awareness and ability to discern – by intuitively following our conscience and responding instinctively to rights, wrongs, wounds and injury with sensitivity.

In Malaysia, as in many other parts of the world, we have a vociferous minority of people who are more than a public nuisance and are blatantly getting away with crass and rude statements. A simple prayer in a school sparked an uproar and warnings. We are getting drawn into a swirling vortex of extremism.

Freedom of speech does not mean freedom from its consequences. The religious departments, religious leaders and the government must be asked about their contribution to unity.

There are specific clauses in the Federal Constitution that are being circulated. Article 12(3) states: “No person shall be required to receive instruction to take part in any ceremony or act of worship of a religion other than his own.”

One must take exception to what a religious leader stated recently. His belief and behaviour seem to border on the unbelievable. His abrasive comments a couple of months ago about Malaysia being only for Malays were not shocking. He has for quite some time displayed a persistent consistency where he has shown himself to be crass.

There will be more than quite a few of those with shared ethnicity with him who will wince in exasperation and despair at his words.

The religious leader’s boldness suggests the law is toothless and irrelevant where he is concerned. I wonder if this an unfortunate reaction to a community and faith that is unfairly pulverised by well-publicised if contentious negatives.

Terrorists perhaps kill more of their own people than anyone else. It is just that the media casts a disproportionate spotlight on, say, five killings that take place in a city in a Western nation compared to say, 60 killings in Baghdad.

READ MORE:  We are servants, God is our master

The scandals that besieged a previous ruling party are of little or no help.

My worry is that such incidents would affect the feelings of my many good Muslim-Malay friends. How do we assure them that these contentious negatives pale in consideration to the invaluable treasure of who they really are and what they mean to us?

What befuddles me is the religious leader citing his writings to show he is not racist as a qualification to pass racial statements. His toxic message sends the wrong signals to those who are aggrieved and suffering on account of any variabilities. We already have online postings intimidating and threatening others.

My questions to the religious leader:

I am puzzled – as the major faiths have the above expressions as ways of building bridges with one another.

You do not come across as a person of nominal intelligence. However, your utterances are disagreeable, coming from someone of your age or stature. You do not seem to someone who wants to use a good faith as a binding thread of healing. For many, there is no illumination or inspiration in your conduct.

We are servants, God is our master

Compassion through the crisis 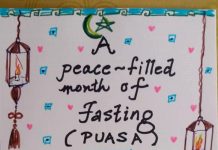 Let care, compassion, concern for all become the ‘new normal’