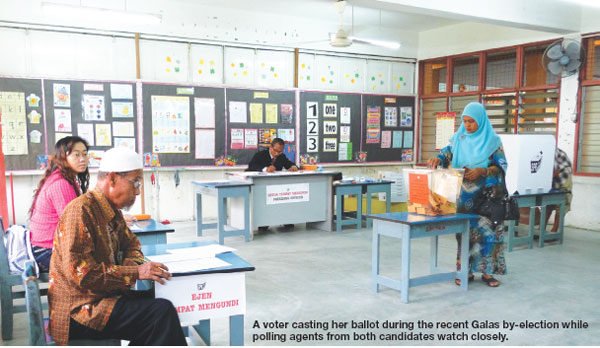 In the 2018 general election, I volunteered as a polling agent for the Lembah Pantai PKR candidate Fahmi Fadzil.

It was an enlightening experience to ensure the democratic process was adhered to.

The constituency witnessed a three-cornered contest with Barisan Nasional, PKR and Pas entering the fray. Each candidate had a polling agent, and we sat next to each other and consulted each other whenever necessary. Although we represented different parties, we were cordial to each other.

On 9 May 2018, polling day, I voted at 8am at a school in Bukit Bandaraya. After breakfast, I reported for duty as a polling agent at a school in Pantai Bharu. My shift from 10am to noon went smoothly, with no untoward incident reported.

Voters who turned up queued patiently and then proceeded to their respective polling streams to cast their ballots. I observed that the Election Commission staff on duty performed their jobs professionally. Occasionally, I asked the official concerned to repeat a voter’s name.

If you are interested in taking part in the country’s democratic process, you may register with the Election Commission as an observer or as a polling and counting agent. Alternatively, you may contact the party that you support.

The Election Commission allows observers representing organisations, but they would be subject to regulations.

Observers may witness the electoral process, including nominations, the campaign period, early voting, polling and the counting and tallying of votes until the official announcement of the election results.

You may download the application form from www.spr.gov.my The closing date is 21 October.

If you are interested in becoming a polling and counting agent, you can volunteer your services to the election candidates or political party you support.

The duty of a polling agent is to act as a representative for the party’s candidate in each voting stream to ensure that the voting process is properly and fairly conducted.

Once the polling session is over; the counting agent comes in to witness the tallying of the votes in each stream.

The critical difference between polling and counting agents and observers is that the latter can move from one stream to another in polling stations, whereas agents must stay put in their designated streams.

Another difference is that observers are independent of parties, while polling and counting agents represent their respective candidates or parties.

If you are a Malaysian citizen, aged 21 and above, registered as a voter and have never been convicted of a crime, you may apply to be a polling and counting agent through several channels approved by the Election Commission.

Upon acceptance of your application, you will probably have to attend training sessions to familiarise yourself with the entire electoral process and the duties of a polling agent or counting agent or both.

Normally, these training sessions are conducted about a month before the election, but some political parties held their sessions earlier in anticipation of a snap general election.

Is there any online counting agent training for GE15 . If yes, appreciate sharing the link

Check out these training sessions by Tindak Malaysia:

Note there are links to four modules further down the page.