Will these politicians stop putting their party priorities and their quest for personal power above the people’s economic survival and pandemic-pressured daily lives? JD Lovrenciear writes.

Italians have voted to sack hundreds of politicians: 345 politicians will now lose their jobs, thanks to a referendum to reduce the size of the Italian parliament by a third.

This bold move by the people will save the Italian public over one billion dollars in 10 years.

Now let us take a quick inventory of cabinets around the world.

South Africa, with a population of 58 million, has 30 cabinet members.

Australia has 23 cabinet members for its 25 million people.

Germany has 83 million people, with 16 cabinet members to serve them.

The US, with 328 million people, only has 17 cabinet members.

China beats them all: it has only 28 cabinet ministers to serve 1.4 billion people.

But Malaysia steals the crown of shame. We have 70 cabinet members (32 ministers and 38 deputy ministers, including one vacant position) plus three envoys with ministerial status to serve a mere 32 million people! A world record of sorts.

Why is it that no other nation wants to emulate Muhyiddin Yassin’s backdoor government?

Now, if this backdoor government really wants to help all Malaysians by saving the plunging economy, don’t you think it must slash its cabinet by more than half from its current bloated 70-plus members?

Why are we Malaysians struggling with economic uncertainties when the government is doing what no other country dares? Are we not going to learn lessons from Italy at the least?

Downsizing the cabinet is not an option. It is a must to save precious public funds, which could go towards serving the people.

Otherwise it is plain double-talk, and Malaysians have to take on the mission of saving their beloved country.

It is not the coronavirus that is scaring the daylights out of us citizens. It is many of the politicians!

When we marched to the polls in 2018, we woke up with great relief knowing we could now rebuild the nation and introduce reforms to free the land from corruption, divisive politics and religious bigotry.

It lasted hardly two years. Dr Mahathir Mohamad pulled the rug under our feet with his sudden resignation. The Sheraton Move in February this year put many of us in misery.

We thought we could pick up the pieces of our broken dream and rebuild the nation. But no, the worst was not over. Muhyiddin wobbled his way till the day he sought a state of emergency to give him a free hand.

The monarch, in his wisdom, stood up to bolster the people’s hope and said no to an emergency. He called on politicians to put the people first.

But for many, their lives are only getting worse. The country is made directionless with all the plotting and counter-plotting going on in behind-the-scenes ‘emergency’ meetings.

The politicking, the infighting, the plots, the brokering and the media statements from various political parties and politicians’ moves are not making our lives any better.

It seems like the worst is yet to come. When will all this political jostling and manoeuvring cease so that we can rescue the economy?

The only people making sense and expressing sober concerns are ordinary people – as can be assessed from their published letters and their thoughts shared over social media.

Much as the politicians claim that their priority is to save the nation and its economy, we do not see their actions matching their words. At some point, out of exhaustion and when driven to the edge from economic and extreme emotional duress, many will feel like sacking all our politicians.

Barisan Nasional may think it is the sole inheritor of government. But it does not appear to believe much in inclusivity, beyond tokenism.

Perikatan Nasional thinks it can be the best collaborator, but it is shipwrecked now.

PKR, the DAP, Amanah and the as yet unregistered Pejuang – all of them seem to be at the mercy of Umno.

But Umno faces a serious trust deficit with its key leaders and politicians fighting for their political lives, given the heaps of criminal charges slapped on them.

Few of these politicians are able to command the respect and endorsement of the people. 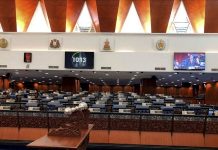 From psychology, we have the “Dark Triad” often found in people with serious personality disorders i.e. narcissism, Machiavellianism and psychopathy.
In contemporary right-wing political movements all over the world, I think we also have a Dark Triad —- of racists/fascists, religious extremists, and greedy rich. The third category would be include those (including kleptocratic politicians who benefit from the neoliberal assault on Keynesianism and the Welfare State i.e. privatisation of traditional govt functions and activities, big tax cuts for the already wealthy).

The more the merrier. But don’t you forget too many cooks can spoil the soup.

Is recent appointment of New Political Secretaries by Sabah another reward to selected supporters with high remuneration packages and perks at taxpayers cost at a time when State and Country are facing financial problems at a time when many are losing jobs due to closing of businessess and income Sources?

Is this another case of PAGAR MAKAN PADI and political leadership showing insensitivity to rakyat at a time when it is a common perception and cala for reduction of bloated political appointments and cicip service?
Bless all

Will the other 141 YB MPs now may have valid reason for not attending Parliamentary sittings and thus may enjoy fully paid holidays? Currently one YB seat is vacant due to demise.
If Government can function with just 80 Elected YBs then is the YB Speaker admitting that the 141 are excess to needs of the country and thus can be removed and save hundreds of millions RM of taxpayers funds in the form of high remuneration packages being enjoyed by these 142 elected YBs.
Bless all

JD it is a good call but the backdoor PM will play … deaf …
Thank you for giving those statistics for us to make an informed comparison.
Those frogs and leeches in the bloated cabinet are really shameless – siphoning off precious resources that can go towards alleviating poverty in our country.

ABOUT US
Aliran is a reform movement in Malaysia promoting justice, freedom and solidarity.
Contact us: aliran.malaysia@yahoo.com
FOLLOW US
Content may be reproduced without alteration but please attribute to aliran.com
wpDiscuz
7
0
Would love your thoughts, please comment.x
()
x
| Reply