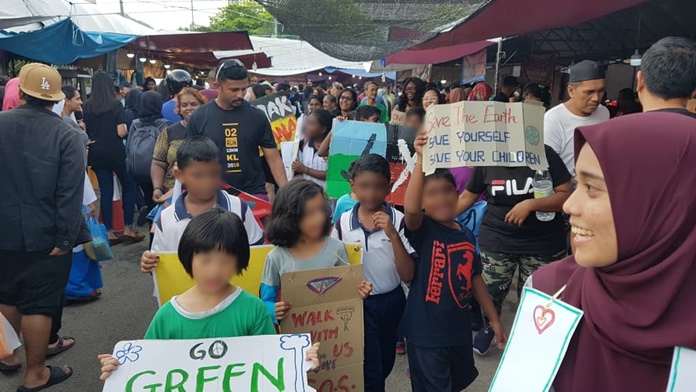 Do we treat our children as the future generation of leaders and encourage them to have agency and speak freely without fear in the present, wonders Mike Tan.

A recent news report “NGOs rapped for allowing kids to take part in climate change protest” has highlighted a long-standing issue once again – the participation of minors in social and political activities.

In this incident, a councillor with the Penang Island City Council said that NGOs had abused their role by using children to get their message across.

The councillor is not the first official to express concern regarding children being manipulated. A federal minister once said, “If anyone brings their children, it could also be dangerous if something untoward happens, and then they will also point fingers at others. This is irresponsible.”

The minister was the then Women, Family and Community Development Minister Rohani Abdul Karim.

The event? The mammoth Bersih 4 rally.

As we all know, Bersih 4 was attended by many Malaysians, some of whom brought their entire families, including children to the rally – although the government and the police advised them not to do so.

Why should the councillor be so upset over 11 schoolchildren attending a local gathering in Penang when no action was taken against the Bersih 4 organiser for the participation of countless children in Kuala Lumpur in 2015?

Her outrage makes little sense unless we take into account her following statement: “I am saddened that these NGOs are abusing their power and status by involving underage children below 12 to represent their groups’ dissatisfaction with PTMP.

“This is despite many dialogues held by the Penang chief minister with NGOs, explaining that the projects are important for the future of the state and to resolve crippling traffic jams.”

First, from what I understand, the schoolchildren were apparently highlighting their concern about climate change at the event on 24 May which was held in conjunction with the second global climate strike.

Other activists at the event linked climate change with the sort of development being carried out in Penang.

In any case, would the councillor have objected if the event had supported a cause she champions herself, like the state government’s Penang transport masterplan (PTMP)? What would she have to say about other children who were wearing #IlovePTMP T-shirts? Would abuse of power and status be mentioned then?

So, when is it okay for children to speak out or express their opinions and when is the accusation of children being manipulated going to be hurled? This is a question that we as a nation have been trying our best to figure out.

Malaysia is known to restrict its youths’ freedom of expression. Till today, the Universities and University Colleges Act 1971 imposes stringent controls over students’ activities.

Many university students ran afoul with this Act, and ironically, some of them are now highly respected political leaders, most notably Anwar Ibrahim.

The youths of the past are now the leaders of the present. They fought hard for their voices to be heard. They did not back down, and we admire them for this.

Do we treat our children as the future generation of leaders and encourage them to have agency and speak freely without fear in the present?

Or must children speak only when they say something we want to hear?

Mike Tan is a member of Aliran and former associate editor of Theantdaily.

DAP goverment acting like …. It’s ok for them to use children for their own policies and campaigns but not ok when children support other causes? What a shame

Going green and taking care of the environment are easy concepts for children! Only adults blinded by greed can’t understand this.

Who are the imbeciles/ idiots making use of young kids to further their evil motives?

Can children reason on complex issues like the climate and the environment? They will only be lead by the adults that they trust.

KK Aw : Can adults reason complex issues like climate crisis and the environment? Even if they can’t and most can’t, do we silence them?

Robyn Choi
Correct me if I am wrong. In the court of law, only the councils can debate. Witnesses can only answer questions and provide their statements. I think this is done to protect the judges from all the frivolous and irrelevant information that would otherwise overwhelm the court.
Unfortunately, democracy has promoted freedom of speech, no matter how ridiculous it is. We have to live with it and not make it more ridiculous.

Good field trip outing for the kids in a controlled setting together with parents/adults. Focus on the message.

Climate change already here. Britain has declared climate emergency. Life will be difficult in the near future. I am happy that these knowledgeable and responsible children are taking action to save planet earth