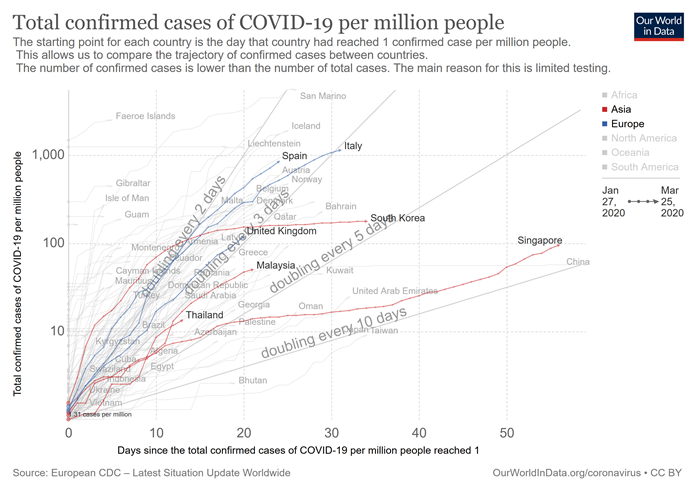 Anil Netto looks at how a few selected countries are coping in their battle against Covid-19.

It is difficult to make sense of the daily rise in Covid-19 cases and how we are coping in our battle compared to other countries.

To me, this graph provides a more meaningful comparison of a few selected countries: Italy, Spain, South Korea, Thailand, Malaysia and Singapore. At least here we are comparing like for like – well, not quite, as there are other factors missing from this graph eg the number of tests carried out, the number of hospital beds and other resources available, the death rate and per capita government spending on public healthcare.

The vertical axis of this graph shows the confirmed cases per million people.

The horizontal axis shows the number of days that have lapsed since the confirmed cases per million people reached one case.

The graph shows that the number of cases per million people in South Korea initially spiked. But then it also quickly reached something of a plateau, probably due to the country’s ability to undertake extensive testing and treat the cases detected.

Italy and Spain too soared initially. But the rise now, though still grim and worrying, aggravated by a shortage of ICU beds, appears to be tapering ever so slightly, in Italy more than Spain. So that provides a faint glimmer of hope.

Malaysia rose quickly, but mercifully, the initial spike has not been as alarming as that in South Korea, Italy and Spain. The rate of increase here appears to be slowing a little after the movement restrictions came into force. The next few weeks will be critical to see if these restrictions will be enough to taper the rise even further.

I tried to include Canada in this graph. But remarkably, the Canadian trajectory is so similar to the Malaysian experience it would have overshadowed the Malaysian line; so I had to leave out Canada!

Now, this is remarkable for Malaysia considering that Canada has one of the most renowned universal healthcare systems in the world. Malaysia is also faring not too badly compared to Australia (not in the graph), another country known for its healthcare system.

The Malaysian public healthcare system had previously shown its mettle in combating Sars and the Nipah virus, despite decades of chronic underfunding (only about 2% of gross domestic product spent on public healthcare) compared to more than 6% in developed countries..

Over the decades, the Malaysian public healthcare system even had to play second fiddle as a few state governments diverted their focus to holding stakes in certain “private” hospitals and promoting medical tourism. We can see how shortsighted that approach was now.

So how the Malaysian healthcare system is coping now is testament to the dedication of our public healthcare personnel and its civil service leadership.

Few realise that the number of cases per million people in Malaysia is still lower than in Singapore – though the latter has managed to quickly stem its rise in cases to sharply taper off over a longer period since reaching its first case per million people. For that, Singapore’s approach has been held up as a model internationally. That said, Malaysia’s trajectory was similar to Singapore’s in the initial stages, and the former only spiked after hundreds of cases emerged from the mass Tabligh gathering here.

Thailand, ranked the best in South East Asia by Global Health Security for its ability to handle a healthcare emergency, is not doing badly either. Despite an initial spike, its rate of increase has fallen below Malaysia’s. In terms of number of confirmed cases per million people, it is the lowest among all these selected nations at just 13 cases (Malaysia – 55, Canada – 74, Singapore – 95 and South Korea – 178). Of course, the latter three countries, especially South Korea, have done way more testing.

So it will be interesting to see how all these nations are faring in a week’s time. Let’s pray that the rates of increase for all of them will taper off quickly and even start falling before long so that fewer people will have to suffer.